This week, the Congressional Budget Office released its 2018 Long-Term Budget Outlook. Like everyone, the CBO makes assumptions, so it’s fair to be skeptical of its estimates.

In fact, we had all better hope they are too pessimistic because we’re in deep trouble otherwise.

Because the CBO thinks federal spending will grow significantly faster than federal revenue, CBO foresees that debt as a percentage of GDP will likely be 200% of GDP by 2048.

But as you will see, we will hit the wall long before then.

CBO numbers show that by 2041, Social Security, health care, and interest expenditures will consume all federal tax revenue. All of it. Everything else the government does (including defense) will require going into more debt.

Yes, making that projection requires an assumption about tax revenue, which requires another assumption about GDP. It could be wrong. But if so, I think it will be wrong in the non-helpful direction because CBO projections don’t include recessions. (You think we’ll get to 2048 without some years of negative GDP growth? I’ll take that bet.)

Note also that the amounts CBO projects for Social Security and healthcare spending may well be low. I think they are very low. They assume some payment cuts to doctors and hospitals that Congress routinely overrules each year, as well as a different inflation benchmark to govern cost-of-living adjustments. And I have little hope Congress and presidents, now or future, will ever gain control over “discretionary” spending.

The CBO also assumes a fairly robust employment picture throughout that time. However, we are entering a period in which automation will replace mass numbers of human jobs.

It might also result in new industries and new jobs, but history shows the transition to create new jobs will take time. Bain & Company’s Karen Harris estimates automation could eliminate 40 million US jobs by 2030 and depress wages for the jobs that remain.

That will reduce payroll tax revenue and drive safety-net spending higher, neither of which will help reduce the debt.

It’s not just Bain, either. McKinsey, Boston Consulting, and other think tanks all expect similar job losses, which CBO does not consider. Yet, it will mean more people not paying Social Security and taxes, hence large revenue losses and even bigger deficits, and more unemployed people looking for the social safety net to help them.

Note: The bulk of those job losses will come in the latter half of the 2020s as new technologies kick in. And new technologies always bring about new jobs, but unfortunately not in the places where the old jobs were lost nor in the industries for which people are trained. To paraphrase Jerry Lee Lewis, there is going to be a whole lot of retraining going on.

So, take whatever estimates are made about future deficits and debt, and realize they are going to be worse. There will be fewer people working and paying taxes and more people living longer and using benefits. Kiss your assumptions goodbye.

What Else Could Go Wrong?

First, at least some of the state and local pension debt I described two weeks ago could easily wind up on the federal government’s plate. Enough states are in a pickle to probably get some kind of bailout through Congress. Maybe not this Congress, but when it’s a Democratic Congress? It may be a whole other ballgame. This would add trillions to federal spending.

Second, CBO and pretty much everyone else assumes the world will avoid major wars. Aside from the death, destruction, and resource diversion, wars are expensive. Our relatively minor (in the historical scheme of things) Iraq and Afghanistan involvements added trillions in debt. Will we get through the next two decades without more such actions, whether large or small? I fervently hope so, obviously, but I would not bet on it.

Third, the life extension technologies I think are coming soon will raise Social Security spending because people will live longer. They may also raise payroll tax revenue if people keep working longer, but it’s not clear which way the scale will tip. It will likely be a net drain on the budget, at least initially. And by the mid-2030s when true rejuvenation is widely available, kiss your actuarial assumptions goodbye.

Fourth, all this presumes that those with capital to lend will stay interested in lending it to the US government. They may not, as the government’s financial condition becomes increasingly precarious. Yes, we’ve heard this before and it proved groundless. Things change. The fact that people cried wolf doesn’t mean no wolves are out there.

Here is a graph that we used last year showing what is likely to happen during the next recession (which I now think we will likely avoid this year, but it is coming), if tax revenue falls to the same degree it did in the last one. 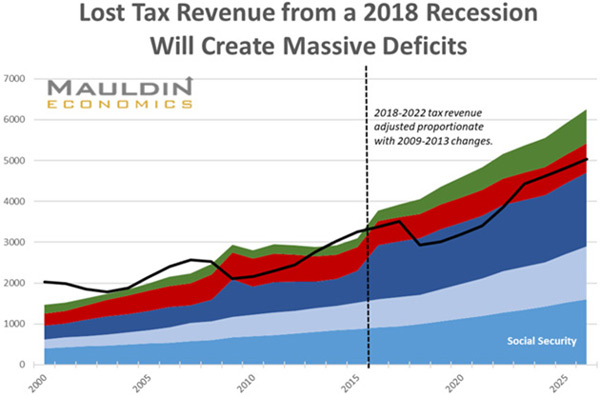 We will have at least a $2 trillion deficit in the next recession, plus a bear market that leaves pensions even more underfunded, and a slower recovery because high debt crowds out future growth. Numerous academic studies back up that statement.

I think a future Democratic Congress and president, or maybe a split Congress that is desperate for funding, will enact a Value-Added Tax (VAT) in response to this. At least that is what I hope. Woody is a little more pessimistic than I am and thinks, quoting at the end of his analysis, that politics and not demographics is the problem:

Furthermore, why need benefits be trimmed much less slashed when the staggering new wealth of the top 10% can be taxed to pay for all promised benefits? Today’s obsession with the growth of inequality will significantly impact how the US will resolve the entitlements issue. The nation will not cut benefits because doing so will prove politically impossible, as President Clinton has long stressed.

Rather, the nation will fund its promised Social Security and Medicare benefits via the only kind of tax that can raise the staggering sums needed to fund them: a net-worth tax on, say, the top 15% of the population. Raising income tax rates on the rich will not raise anywhere near the amount needed for the next 40 years. Only a net-worth tax can do so.

Here are the relevant mathematics. As already stated, the net worth of US households has now reached $100 trillion. The top 15% wealthiest families own 90% of this wealth, or about $90 trillion. When push comes to shove, resistance by the rich against a wealth tax will be swamped by the political reality that a good 60% of Americans will be obsessed with funding their old age. Thus, rich as they are, the very wealthy will have little political leverage with which to fend off an annual net-worth tax.

The political logic will be: “Look, you rich people have had a return on your wealth of over 6% during the past hundred years. Why should this change very much? But if this is so, then it is time for you to pay your fair share, that is, to part with 2.5% of your total net worth annually. Your wealth will still continue to grow. With increased annual tax revenue of some $2.5 trillion, it will be possible for Americans to receive their promised benefits.”

We would expect the same logic to translate into additional net-worth taxes at the state and municipal level.

The fallout from such a policy will of course be disastrous.

Oh, dear gods, I hope he is wrong. It would be beyond disastrous.