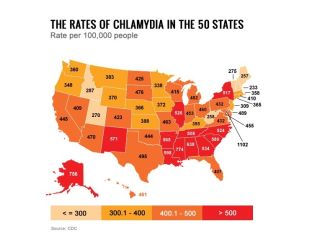 Infectious diseases seem to come and go, sometimes causing scary outbreaks, while other times seeming to disappear. But some infectious pathogens are always with us, lurking just below the surface of society.

Sexually transmitted diseases are one major group of diseases that make for ongoing hidden epidemics: In the United States alone, there are nearly 20 million cases of new sexually transmitted infections yearly, from just eight viruses and bacteria, according to data from the Centers for Disease Control and Prevention (CDC).

Perhaps 20 million new cases sounds like a high number. But because infections can persist for a long time, especially in people who aren’t aware they are infected, the number of existing infections at any given time is even higher, at 110 million, according to CDC researchers. [See maps of the US with STD rates by state]

The eight most common STDs in the U.S. are chlamydia, gonorrhea, hepatitis B virus (HBV), genital herpes, HIV, human papillomavirus (HPV), syphilis and trichomoniasis. About 50.5 million of these current infections are in men, and 59.5 million are in women, according to the CDC’s 2013 report, in which the researchers looked at 2008 data.