Mexico is perpetrating a crime by helping 1,000 Hondurans march through the country to invade the United States.  The immigrants are not Mexican citizens; therefore, Mexico has no legal basis to allow them to use their country to illegally cross into the US.  I thought we had a good relationship with Mexico, but as President Trump said, “Mexico must help.”

President Trump gave a brief message on the crisis before attending Easter service:

He, also tweeted about the situation: 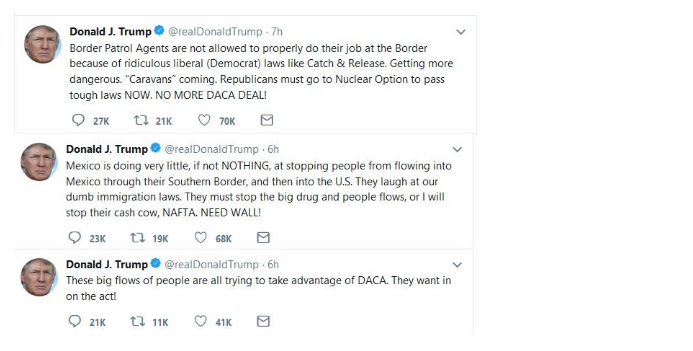 Trump made the comment that these immigrants are trying to take advantage of DACA.  He said, “NO MORE DACA DEAL!”

“Mexico is doing very little, if not NOTHING, at stopping people from flowing into Mexico through their Southern Border, and then into the U.S.  They laugh at our dumb immigration laws. They must stop the big drug and people flows, or I will stop their cash cow, NAFTA. NEED WALL!”

“Border Patrol Agents are not allowed to properly do their job at the Border because of ridiculous liberal (Democrat) laws like Catch and Release.  Getting more dangerous!”

According to the Center for Immigration Studies, Mexican authorities have allowed the migrants to drive north “with relative ease.”

The group Pueblo Sin Fronteras, which aids immigrants, bragged about speeding into Mexico. It said, “On Monday Pueblo Sin Fronteras posted a video with the caption, ‘The Refugee Caravan knocking down borders yesterday in Huehuetan! Immigration agents abandoned the post when they saw us coming. “

I find this frightening, as the attitude is one of winning a battle against the United States.  Those who love this Country are at war with the Liberals, who are perpetrating this type of activity.  We know that George Soros seeks to destroy all border sovereignty within the world. It is happening, and God bless President Trump for his attempt at trying to save this Country.

Frankly, I am surprised not see blood on American sidewalks. However, I should say on the sidewalks of my community, as the sidewalks are surely bloody in places like Chicago.  That is the battleground on which the United Nations will step in and call it genocide. It is planned, and it will happen. We are fighting a losing battle for United States sovereignty, but I should not say this, as President Trump has not given up the fight.

Open borders groups are organizing armies of migrants to the U.S. right now about 1200 to 1500 new Democrats, mostly from Honduras, are marching through Mexico with no one stopping them, “Breitbart” and “Universal” report. Mexican border patrol abandoned their posts.  They plan to claim they are refugees and demand asylum. They brought children with them and have traveled in 90-degree weather to look more sympathetic.

Make no mistake about it, Soros is behind this!

They are organized and ready in every way possible – they had to have help.

“Additionally, the group practiced security protocols, including formations which called for the men of the group to form a wall around the women and children. Moreover, the Central Americans made their way to Mexico’s Commission for Refugee Assistance and made calls for better compliance with international and national laws, faster processing of asylum applications, and an increase in acceptance rates,” she wrote.