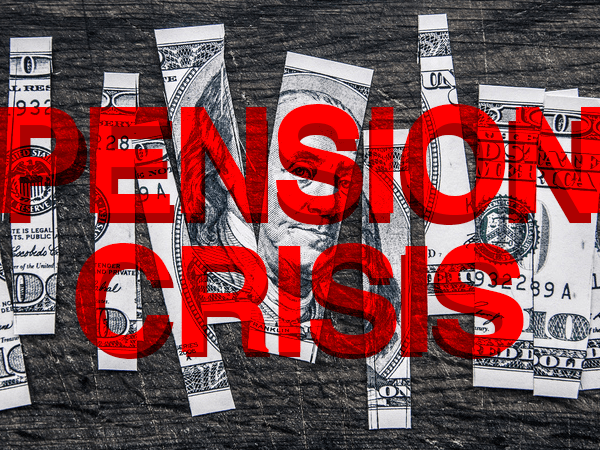 It’s become fairly common knowledge that public pensions are on the verge of either radical overhaul or extinction.

Worldwide, pensions are set to reach a shortfall of $400 trillion. This is a larger amount than 20 of the world’s largesteconomies, according to Sovereign Man.

It was even reported that Congress is planning for pension fund failure in the U.S. Not to mention, Philadelphia has considered tapping public utility payments to cover their shortfall.

Add it all up, and the situation doesn’t look good for public pension plan payees. Many police, fire, public education, and municipal personnel are (or will be) directly affected.

But the indirect effects may prove to be a burden for anyone in or entering retirement. There are two primary reasons for this.

First, according to a recent Washington Examiner op-ed, almost half of Americans have no retirement savings to deal with these indirect effects (emphasis ours):

And second are “hidden” consequences of failing pension programs at the state level, which may affect every person who pays taxes.

READ  Fireworks to Come When Public Realizes Inflation Is Not “Transitory”

Martin Smith is a correspondent for PBS who has reported on America’s growing retirement crisis. Speaking to Richard Eisenberg, he revealed the imminent potential for cutting services or a federal bailout if state pensions fail:

“About half the states have pensions that are 70% funded or much worse. The states can’t borrow or sell bonds to China.” So, Smith adds, in four or five years, some of those states will likely have to either cut their services (the equivalent of a state bailout) or they will need a federal bailout.

Imagine if the police force or firefighters in your city suffered dramatic cutbacks to account for pension shortfalls? Or, if your taxes went up to account for a federal bailout of state pension programs?

Neither ripple effect is desirable for any person. But both could happen if pension shortfalls become too much of a burden at the state level.

Retirees from private and public sectors are looking for other options because of “dwindled pension funding” and potential reduction of Social Security benefits.

According to a PlanSponsor article, “employer-sponsored retirement plans” and IRAs look to be alternative options, among other savings ideas. But some still feel stuck in their current situation.

Eisenberg’s report, republished at MarketWatch, ends on a somber note from a teacher: “I have no savings. My pension is everything. Without that, I won’t survive.”

That’s a stark reminder to make sure we don’t put all of our nest-egg in one basket.

It’s important for you to start making your retirement as resilient as possible. This will give you the best chance to enjoy your “Golden Years.”

Over at The Hill, Olivia Mitchell offers some suggestions that may help. She recommends that you “understand that your pension and Social Security are not fully guaranteed.” Benefit cuts are always possible.

She continues by suggesting you “delay retirement as late as possible” because benefits can pay out higher at later retirement age. This also reduces the time you receive payouts, so your fund can last into your later years.

Finally after suggesting part-time work to supplement income (if possible, and if necessary), she suggests cutting spending now as much as possible.

If you don’t have any retirement savings yet, the best time to start is now. As time goes on, you can consider adding some stability to your portfolio by shifting a percentage of assets into precious metals like gold and silver.

But whatever you do, don’t wait. The ripple effects of public pension program failure aren’t going to wait for anyone.