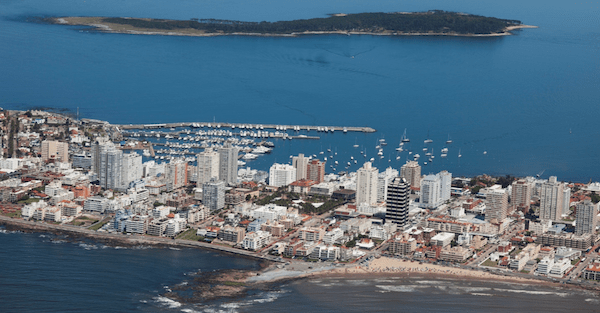 Yesterday, I shared how you can get a Brazilian passport for your entire familyby having a baby within the country’s borders.

Today, we’ll continue our discussion of building a proper Plan B. Again, a Plan B is simply an insurance policy.

So many people have the vast majority of their assets in their home country. But that puts you and your assets at tremendous risk.

If anything goes wrong in your home country, you could lose your assets and maybe even your freedom.

But by building your personal, Plan B, you can make sure you’re in a position of strength no matter what happens. And, even if nothing happens, which is what we all hope for, you won’t be any worse off.

One of the ultimate aspects of a Plan B is a second passport. And today, I’ll tell you how you can get a passport in a wealthy, beach paradise…

I lived in Punta a few years back… there’s no doubt it’s an idyllic beach town. And while I’m writing you today to explain how you can get a second passport from Uruguay, let me share a bit more about Punta, its economy and culture.

Punta is located about 100 miles east of Montevideo, Uruguay’s capital.

As you can see in the photo, it has a modern skyline dotted with high-rises. The beaches, of course, are first-class.

The city’s permanent population is about 100,000 people. But during the high season – mid-December until March – the population quadruples. (Remember that Southern hemisphere’s seasons are inverted.)

During the season, Punta is a never-ending party, bustling with exciting nightlife and a first-class restaurant scene. On the off season, for comparison, most of the restaurants are closed and the government will even shut off stoplights to save money.

(If you want to experience Punta yourself but don’t want to spend a fortune, early December and March are the best time to visit – the weather is still great, and the prices are reasonable.)

But outside of Punta, Uruguay is rural.

Even in Montevideo, you’re more likely to see a horse carriage than a Porsche. In fact, there are almost four times more cattle in Uruguay than there are people. No other country comes close to this “cows to people” ratio.

See also  LEAKED Bank of America Memo: “We Hope” Conditions for American Workers Will Get Worse

But Uruguay is a paradise for the right person and has attracted many expats to its shores.

The Uruguayan culture – together with Argentina and southern Brazil – has a strong Southern European feel.

Also, the unique combination of its laid-back atmosphere, good weather, rich culture, fantastic beaches, and great food – Uruguay is a carnivore’s dream – creates an atmosphere that you may want to enjoy for the rest of your life.

However, lately, I’ve heard rumblings that obtaining a legal residency in Uruguay has become complicated and getting a second passport there is almost impossible.

One of our own Sovereign Man: Confidential subscribers spent several years in Uruguay, applied for naturalization and was denied.

But we still get loads of questions from readers about our current opinion of Uruguay for residency and citizenship.

After talking to our legal contact on the ground and several people who successfully went through the process, the verdict is clear: Obtaining a second passport from Uruguay is still very doable, you just need to follow few simple rules.

You start with obtaining a residency. For that, you don’t need to invest in the country or buy expensive property. You just need to prove that you can support yourself.

My contact on the ground tells us that showing $1,500 per month in income is usually enough. For a family of four, she advises demonstrating around $5,000 per month.

(That’s higher than similar financial requirements in Chile and Argentina. For a family of four, Chile wants to see around $3,000 in monthly income. And Argentina will be satisfied with just $1,000 a month.)

You can combine any kind of income, including your rental income, pension, social security payments, dividends, and even your location-independent income coming from your online business or freelance activities.

After spending the required number of years in a country, you will become eligible to file for naturalization in Uruguay. Uruguay is unique in its approach, as it differentiates between married and single applicants. If you are single, you can apply for naturalization after five years as a resident, and if you are married three years is enough.

See also  Will American Medical Science Follow the American Economy on the Road to Destruction?

But for your naturalization application to be approved, the government wants to see your successful integration into Uruguayan society.

Getting a local job or starting a business and paying taxes is a big step. Putting your kids in one of the Uruguayan schools works, too. So does a local gym membership, church and doctor’s office.

Frankly, if you live in Uruguay full time, or at least spend significant time there, you’ll integrate naturally as you settle in.

The unlucky subscriber I mentioned above spent enough time for naturalization, but during this time, his family didn’t integrate.

They didn’t interact with the locals. Instead of going to the gym, they jogged in the park. They didn’t sign up for any social activities. They homeschooled their children. In short, there weren’t many visible and provable ties to their community.

But, this same thing doesn’t have to happen to you. Use this unfortunate example to your advantage. Because if you follow a few simple rules, you will get a second passport from Uruguay.

If you are interested in obtaining a second passport, I encourage you to download our free Second Passport Guide.