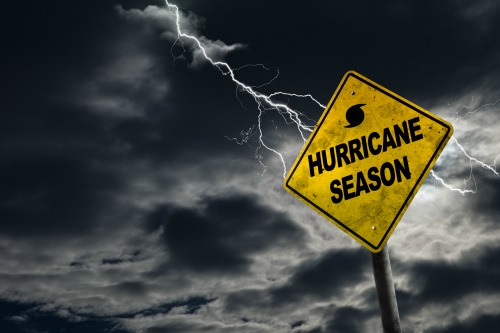 Before 2017, there was a relatively quiet period for hurricanes. In fact, a decade went bywithout a major hurricane. But all of that changed in 2017, when monster hurricanes Irma and Harvey hit. Due to their unprecedented damage, the 2017 hurricane season became one of the most expensive on record. With nearly 200 billion dollars worth of damage, many were hoping for another quiet lull for this year, but forecasters say otherwise.

Increased sea levels could also be indicative of more severe storm damage. “Higher sea levels mean that deadly and destructive storm surges push farther inland than they once did, which also means more frequent nuisance flooding. Disruptive and expensive, nuisance flooding is estimated to be from 300 percent to 900 percent more frequent within U.S. coastal communities than it was just 50 years ago.”

When combined together, these indications could create a conditions perfect for hurricane formations. AccuWeather Atlantic Hurricane Expert Dan Kottlowski is predicting the United States will see 12-15 tropical storms, 6 to 8 are forecasted to become hurricanes and 3 to 5 are forecast to become major hurricanes.

“According to Kottlowski, conditions are ripe for early season development in the Gulf of Mexico due the warm water already in place in that part of the Atlantic basin.

As for the rest of the season, historical records and the projected pattern suggest the area from Houston to Florida and up through the Outer Banks of North Carolina will be more favorable for direct impacts from tropical storms and hurricanes.

‘Anywhere else along the coast, everybody should still be vigilant and prepare for a possible direct impact,’ Kottlowski said.

‘You should have a hurricane plan in action. In other words: If you had to evacuate, what would you take with you? And if you were staying home, how would you deal with a storm that may knock your power out, may knock your water service out,’ he said.

‘You want to prepare for the worst case scenario – that’s called having a hurricane plan. And the government and local officials do have guidelines on how to create such a plan depending on where you live.’”

Hurricanes are Unpredictable and Preparation is Key

In the United States, almost 40 percent of the population lives in relatively high-population-dense coastal areas, where sea level plays a role in flooding and hazards from storms. With so many living near hurricane-prone areas, it is important for everyone to be prepared.

READ  Worst for Stocks Over?

It is emphasized in The Prepper’s Blueprint how unpredictable hurricanes can be and how this type of natural disaster is truly one of the most difficult emergencies to prepare for simply because there are so many variables to account for. These storms can range from mild to severe, cause wind damage, flooding, and tornadoes. You can be fully stocked with provisions and then your home is flooded in a matter of minutes. For example, before Hurricane Harvey made landfall it was predicted as merely a tropical storm or Category 1 hurricane. In fact, many living in the area did not think much of it in terms of severity and only stocked up on supplies for a few days. Within those few days, it had developed into a Category 4 with 132 mph winds.

5 Ways to Get Prepped

Having an emergency plan and some simple supplies on hand can help you get through a disaster unscathed. If you can start gathering supplies now, you won’t have to deal with panic buying or going home empty-handed. This hurricane primer has essential articles with supply lists that may be essential in your preparedness planning.

Here’s how to start!

Have a plan. Making a plan ahead of time will keep you organized and ensure that all of your needs and supplies are accounted for. This short-term emergency checklist is good for getting necessary supplies in place. At a minimum, keep an emergency bag filled with supplies to last for 72-hours. This is good for peace of mind, as well as, in the case of having to evacuate on a moment’s notice. If you want to go “full prepper” you should really have multiple 72-hour bags packed for places where you spend most of your time: the home, vehicle and workplace. This ensures all of your bases are covered. That said, it is also imperative to research and learn about the aftermath of hurricanes.

READ  MINISTRY OF TRUTH: The Democrat's expert for their hearing on 'misinformation'

Get some supplies. You want to create a short-term emergency supply of not just food and water, but critical items that will disappear after a hurricane. Many of the items that often disappear as a result of a disaster are items that protect your basic needs. In the aftermath of Hurricane Harvey, six items disappeared almost immediately due to the shortage of supplies: gasoline, water, food staples, bleach, toilet paper, and home repair items. To ensure you have all that you need, read the 52-Weeks to Preparedness to get prepared for short-term to longer-term emergencies.

Prepare for all family members and don’t forget your pets! One of the reasons planning for emergencies before they occur is so important is that when panic sets in, you tend to forget needs of others like prescription medicines or food for pets.  Consider having all members of the household knowing some simple first aid and CPR.

Get supplies to protect your home. Having pre-cut boards and supplies prepped and on hand can save valuable time when you are under a hurricane threat. This checklist for preparing the exterior of the home should be printed out and put in an emergency binder for essential protocols to follow.

Plan for the worst-case – There are consequences to those who fail to prepare for disasters. They are listed in detail in this article and should be read.  There are immediate threats that hurricane victims must be aware of and be prepared to encounter. Water contamination, infectious diseases, sanitation emergencies, and looting could all pose a problem for victims of hurricanes. While prepping for hurricanes at the last-minute can be a gamble, it is possible. Here are some tips for last-minute preparations for sheltering in place.

Hurricanes are unpredictable in nature and the 2017 hurricane season was a brutal reminder of how quickly your world can change and have the capacity to level homes, flood neighborhoods and cause massive amounts of damage to communities. Experts are warning communities to prepare accordingly for this season.