(3) This is highly sympathetic spin that is ultimately self-defeating:

Any assessment of Biden’s performance needs to take into account the epic challenges he faced from the start. “They came in with the most daunting set of challenges arguably since Franklin D. Roosevelt, only to then be hit by a perfect storm of crises, from Ukraine to inflation to the supply chain to baby formula,” said Chris Whipple, the author of a book about White House chiefs of staff who is now writing a book about the Biden presidency. “What’s next? Locusts?” Biden wonders the same thing. “I’ve heard him say recently that he used to say about President Obama’s tenure that everything landed on his desk but locusts, and now he understands how that feels,” a White House official said.Biden inherited problems, as every president does. Of course, his argument to voters was that he and his team would fix them, by dint of their competence and doing the opposite of Donald Trump.  He wanted this job.  He got it.  On a number of fronts, from COVID to the economy, to immigration, he could have achieved better outcomes my simply doing nothing, or close to it.  He also inherited COVID vaccines (despite false White House claims), an economy just waiting to rebound, and some successful illegal immigration mitigation policies.  He and his team have mismanaged pandemic-related spending, harmed millions of students by bowing to teachers unions’ fake science, overheated the economy with inflationary spending that some Democratic economists warned against, and turbocharged the border crisis.  Afghanistan was another self-inflicted disgrace, the sheer incompetence of which may have informed Vladimir Putin’s miscalculation in Ukraine.  Wondering aloud about outside forces like the plague is embarrassing.

Read the whole thing. If that language of “the most daunting set of challenges arguably since Franklin D. Roosevelt” quoted above feel like deja vu, that’s not surprising, since it’s a classic bit of Democrat spin — George H.W. Bush’s mild recession of ’91-’92 was described as “The worst economy in 50 years” by candidate Bill Clinton’s campaign, to cast Papa Bush as the reincarnation of Herbert Hoover. Time magazine portrayed incoming-President Obama as FDR for their November 24th, 2008 cover, with the headline, “The New New Deal.”

See also  Thanks to Biden, U.S. Families to Pay $450 More for Gas This Year... Economists To Americans: Get Used To It!

And speaking of Obama, as Noah Rothman of Commentary writes, “Consciously or otherwise, the Biden administration is channeling the Obama White House’s self-indulgence:” Joe Biden’s Presidency Reaches the Self-Pity Stage.

“Now, let’s face it,” Barack Obama told a group of Democratic donors at roughly the same point in his presidency, “this has been the toughest year and a half since any year and a half since the 1930s.” In public and private, the former president regularly lamented the circumstances that befell his presidency—from the ploddingly slow economic recovery to the rise of ISIS in the Middle East. In his own telling, Obama was a victim of circumstance. His pursuit of higher tax rates, support for a burdensome regulatory environment, and the ill-considered withdrawal of U.S. forces from Iraq failed to earn him sufficient praise.

The former president bristled at the GOP’s critique of his administration’s profligacy. “It’s like somebody goes to a restaurant, orders a big steak dinner, martini, and all that stuff, and then just as you’re sitting down, they leave and accuse you of running up the tab,” Obama told another group of donors. The blame for America’s ballooning debt, which just about doubled under his watch, could be laid at the feet of structural forces, reckless actors in the private sector, and, of course, Republicans. Obama and his team convinced themselves that they could talk Americans into believing their objectively unenviable economic circumstances weren’t that bad after all. Biden’s team seems to have bought into the same myth.

Obama was similarly ill-served by his staff. When the president declared that “the private sector is doing fine” in the summer of 2012 (only to later admit that “the economy is not doing fine”), Obama’s  staff did their best to suggest the president had not said what the nation heard him say. From “you didn’t build that” to Obama’s “hot mic” moment confessing to nominal Russian President Dmitry Medvedev that he would have “more flexibility” in his second term, the president’s aides (and much of the journalistic establishment) were quick to “clean up” and “contextualize” those remarks. Before White House Chief of Staff Ron Klain was the subject of much second-guessing, it was Rahm Emanuel who was failing the president.

Every president inherits a set of circumstances, some of which are more advantageous than others. Every president encounters unforeseen challenges. Every president is opposed by the party out of power. And although Biden has a unique talent for malapropisms, every president relies on his communications staffers to mop up after a gaffe or misstatement. The Biden White House isn’t uniquely beset by the forces of history. Indeed, so much of what the president and those in his orbit resent are conditions they either contributed to or incepted into existence.

As Ace of Spades notes, “The magnitude of Joe Biden’s failures is now so large that even Joe Biden is beginning to grasp it. That’s how big a thing this is. Even f’n’ Joe Biden gets it now. He now realizes that the midterms will be a historic repudiation, and that 2024 will probably be one as well. And that he will go down as a worse President than Jimmy Carter. So that means it’s time for Pre-criminations. It’s time for Joe Biden to start trashing his staff and blaming them for his failures.” 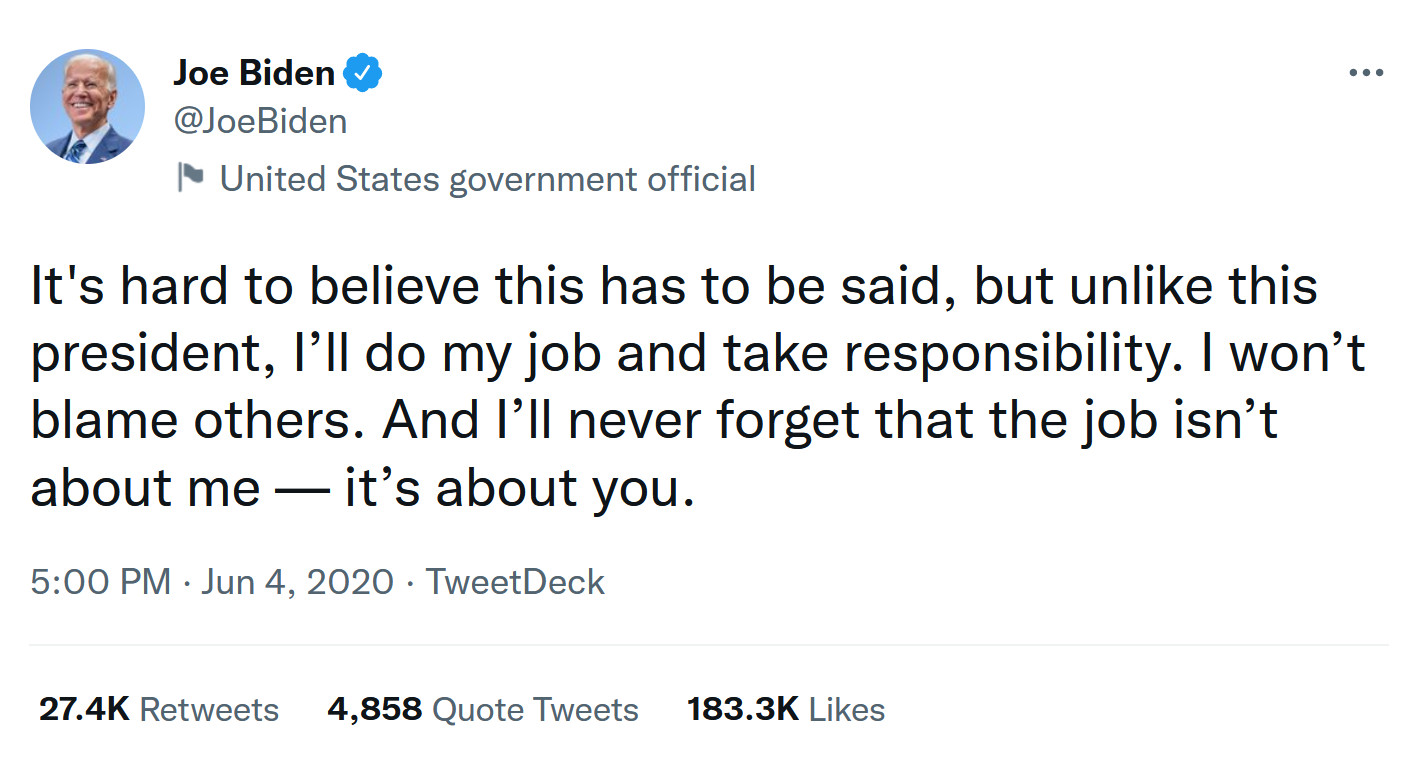 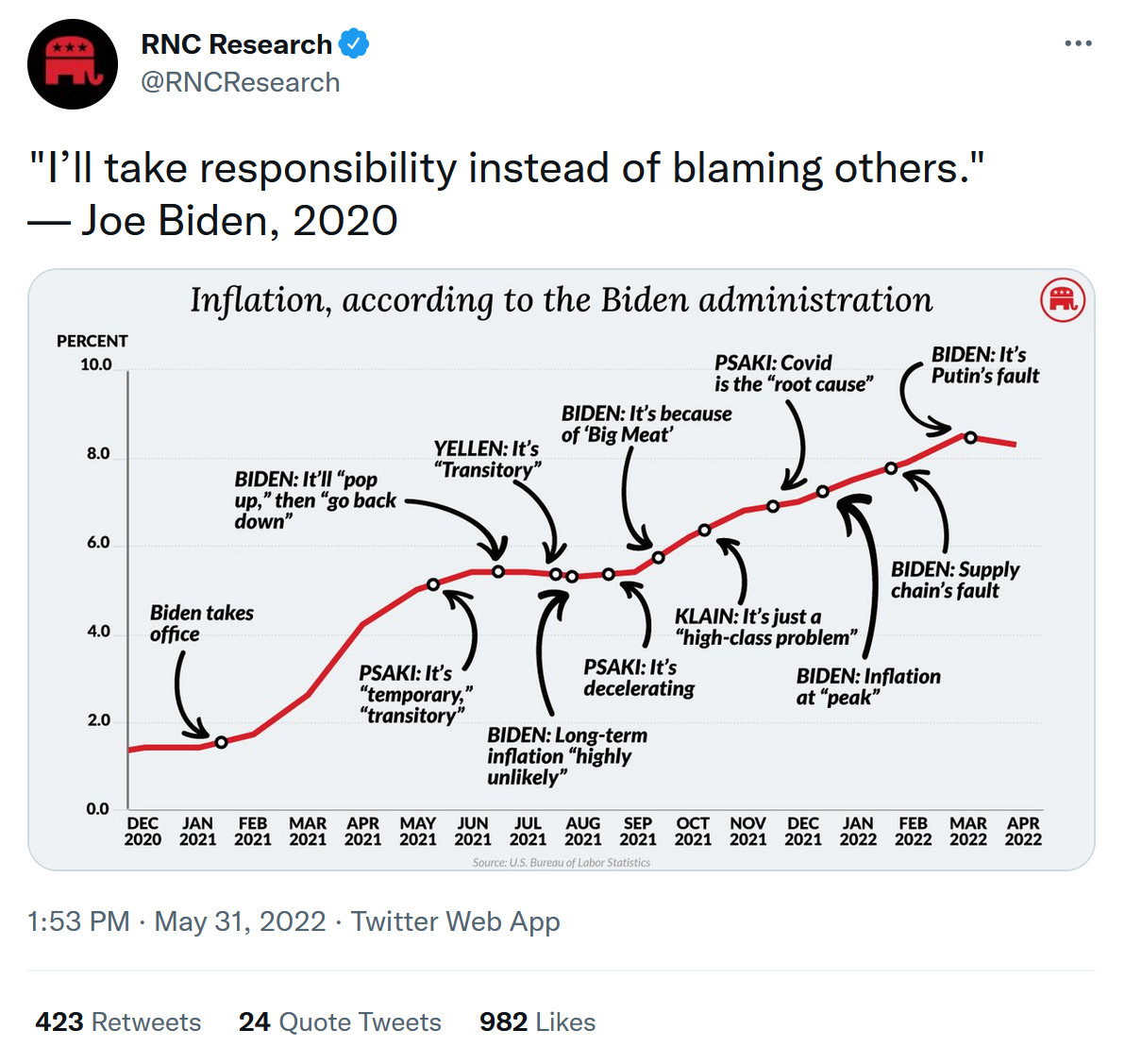 Biden Wants You to Know the Economy Is Super and if You Don’t Agree You’re a Moron.