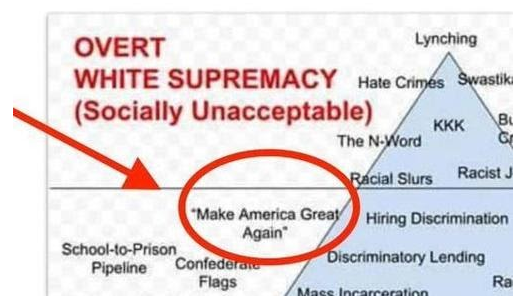 This is not a joke unfortunately. According to documents revealed by Turning Point USA’s Benny Johnson, Iowa’s largest school districts are using CRT (critical race theory) materials which classify the “MAGA” movement as a form of white supremacy, whatever that means.

For people who just arrived in our dimension, MAGA stands for Make America Great Again, and critical race theory activists regard the movement as being socially unacceptable.

Other examples of White Supremacy, both covert and overt, include American immigration law, i.e. having a border/country, Columbus Day, and mass incarceration, i.e. punishing lawlessness.

According to leaked documents, hundreds of educators in Iowa are being forcefully indoctrinated via CRT so-called training, which is nothing more than institutionalized anti-White racism sponsored by taxpayers’ money.

To add insult to injury, CRT is mandatory in Iowa, where Trump won by 9 points.

This is done through MANDATORY Critical Race Theory training FORCED on teachers at taxpayer expense.

This is a ROCK SOLID, REAL WORLD application of Critical Race Theory being used as a *political* weapon to target Republicans.

This is NOT education.

It is naked political vengeance using the state education system and our children’s educators.

This training is CRT in practice pic.twitter.com/U4jaEZaVdU

You should read the entire Twitter thread, it’s very interesting.

Here’s the deal: the Republican Party will do nothing about it. They are worthless.

Second, it is no more illegal to be a “White supremacist”, whatever that means in newspeak, than it is to be a homosexual.

And I’m getting dang tired of being told it is.

So, if I understand CRT correctly, it completely revolves around WHITE PEOPLE with “people of color” cast in the role of “agents of change” focused on fixing guilt-ridden white libtards.

Not “people of color” looking at each other, rolling up their sleeves, and fixing their families and communities.

Noooo…..they are supposed sit around and cater to a bunch of white people as they struggle to become “self-aware” in a national therapy session!!

I mean seriously…..ARE YOU SERIOUS??

For anyone interested, this material was distributed by a group called Whites for Racial Equity.  They are an affiliate of SURJ (Showing Up for Racial Justice) which is some nonprofit out of Buffalo that believes in, among other things, defunding the police.  The nonprofit is headed up by the same person who is also Executive Directory of the Clean Air Coalition of Western New York.

Based on information available in Charity Navigator, she would appear to make over $100k in annual salary combined from these two “non-profits”.

So, on top of destroying society and creating racial animosity, all this shit is a money making scam for progressives.

All of the above is public information by the way.

Critical race theory, commemorations of racial libels like the “Tulsa Massacre,” and government celebration and endorsement of Black Lives Matter show that a “successor ideology” has emerged to replace the original American mythos. It is internally coherent. It replaces the previous national story about British settlers building an independent republic that gradually became a wealthy and powerful nation. It thus provides a justification for the physical replacement of whites in this country.

See also  Trump's Appointees Helped Cause the War in Ukraine

The new creed teaches that America was built by whites on “stolen land.” America’s story is the struggle to overcome the white racism embedded in our very institutions. White Americans, who created the country, suddenly become the least American of all. Juneteenth becomes the true independence day.

This looks like a Sunday worship. What the hell is wrong with these people?