The United States federal progressive income tax dates back over 100 years, to the Revenue Act of 1913. Back then, the U.S. received most of its tax revenues from tariffs. Many states have followed the federal government’s lead in collecting a progressive state tax income. Today, income tax is one of the many ways that states collect tax revenue, but some wonder whether today’s variety is actually regressive. 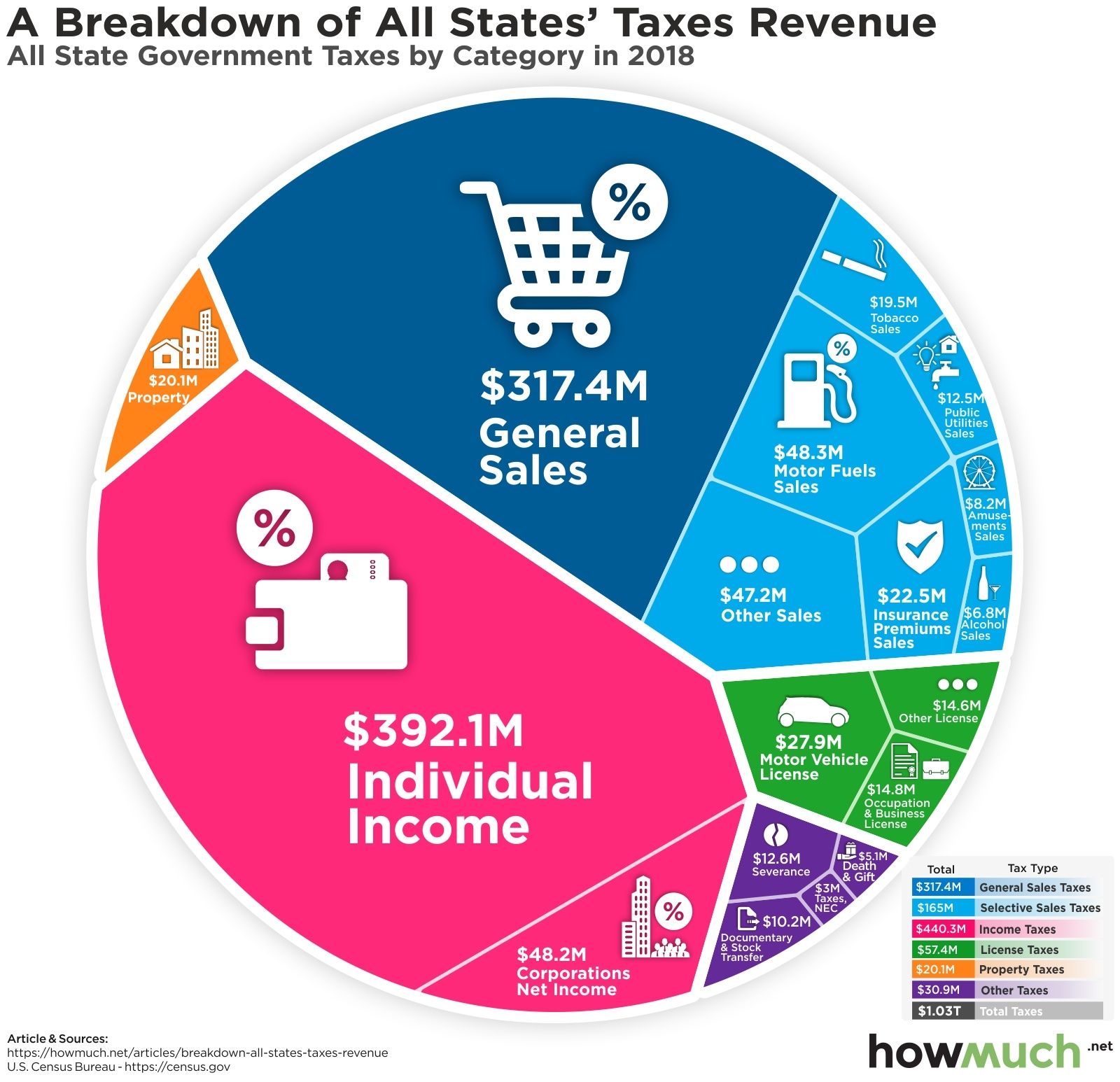 Our data is 2018 state tax revenues for all 50 states by category as reported by the United States Census Bureau’s Annual Survey of State Government Tax Collections. Each category and its sub-categories are color-coded and plotted to scale on the viz.

The single largest category of revenue is individual income, followed by general sales. Income taxes paid by corporations fall at a distant fourth. With wages and purchasing power barely budging in years, and a federal debt that has risen to $23 trillion, from $13 trillion in 2010, many are calling for a reconsideration of how the government collects revenue. The Treasury is on pace to borrow more than $1 trillion during the current fiscal year — what sources are available to close the gap?

A particularly aggressive strategy to drive revenues from the wealthiest individual comes from Democratic presidential candidate Elizabeth Warren, whose proposed wealth taxwould set a 2% annual tax on wealth over $50 million and a 6% tax on wealth over $1 billion.

However, even with a Democratic-controlled presidency and Congress, the wealth tax faces a bevy of technical and constitutional challenges, as it’s unclear exactly how total wealth would be measured. Warren claims that her wealth tax can successfully fund providing Medicare for all citizens without raising taxes on the middle class, but billionaire investor Ray Dalio foresees taxes increasing regardless, as mounting debts and liabilities must ultimately be paid.

Recently, Microsoft co-founder Bill Gates has voiced concerns about that Warren’s wealth tax would stifle entrepreneurial risk-taking: “You really want the incentive system to be there, and you can go a long way without threatening that,” Gates said. However, Warren has stood her ground on the tax, even offering Gates via Twitter to personally meet and explain how the tax would affect him.

Other potential sources of additional federal tax revenue suggested by presidential candidates include a gas tax and a value added tax.

Do you support the Warren wealth tax plan? Why or why not? What other ways could the federal government close the spending gap? Let’s us know in the comments and share with your friends.