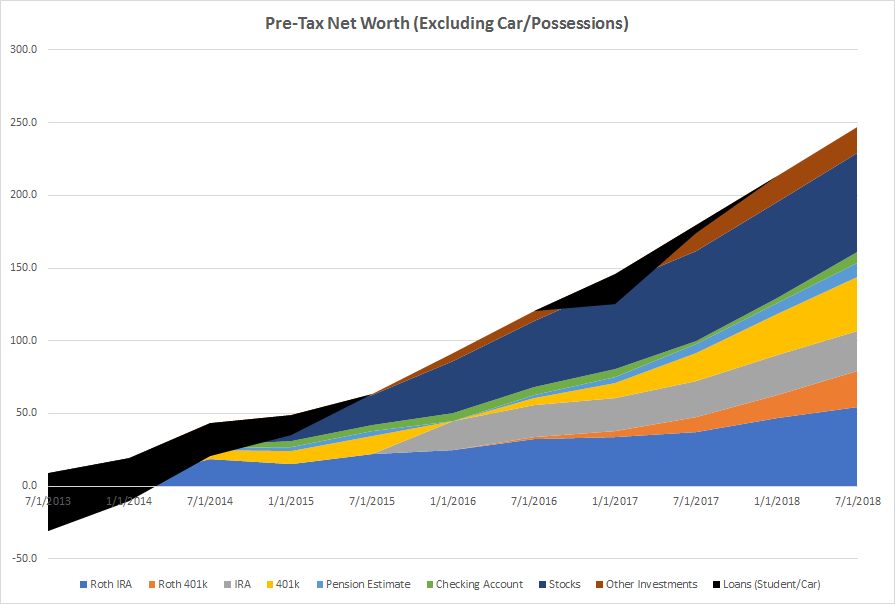 Net Worth Image Have to pay taxes on some retirement accounts and some unrealized gains still.

College I worked and paid my way through most of college. I graduated in May of 2013 with roughly $40k in student loans and a net worth of -$38k. I received a signing bonus of $5.5k shortly after. I used the money to buy a generous gift for both my brother and sister and then invested the rest into a roth IRA.

Job I work in finance for an insurance company. My salary started at 67k and has increased to roughly $90k. My bonus over the years started at $0 (besides signing) and has increased to $10k. I switched jobs in January of 2016 and consolidated my pension and 401k into an IRA. Both companies I worked for offered a generous 401k match 6% then 5% and both contributed to a pension. My average salary was around 80k but was likely closer to 90k with bonus and retirement benefits.

Expenses I predict my average savings rate is likely 70%. Rent averaged around $850 a month and was pretty cheap because I only spent 1 year living alone. I always had roommates and more recently moved in with my girlfriend. My net worth may take a hit in the near future as I plan to get married in the next 2 years and probably have kids shortly after. I did kind of splurge on a car, but I really do get a lot of enjoyment out of it. I also spend a bit more than I should on eating out. However, I never spend money on clothes, I always ask for this for Christmas and my birthday.

Investments Personally managed investments have seen great success, I predict they are between 15% to 20% annualized returns. However, I know these high returns are not realistically attainable forever, so I am continually moving a larger percentage into passive funds. I hope to break into real estate investments at some point in the near future as well.

Other Comments I never actively sought out financial independence, I more so had an obsession with saving and investing. One mistake I probably made was paying off my student loans instead of maxing out my 401k right out of college. I also fear that I made a mistake by contributing too much to a roth 401k instead of a traditional 401k. I am mostly conflicted on this due to the potential for a conversion ladder. I definitely want to retire early, but am not sure what my savings goal is yet and imagine that will change a lot once I am married.