Some proof being wise in the beginnings of Idiocracy is frowned upon.

This kiddo WORKED, not WHINED, his way through school.

In a world where everyone gets a participation trophy, something amazing happened on a highway in Wake County, North Carolina, where a father refused to let his son’s amazing accomplishments go unnoticed, for fear they might offend those who didn’t achieve the same level of greatness…

A dad in North Carolina brought his recently graduated son a billboard recognizing him as valedictorian even though the school refused to do so. 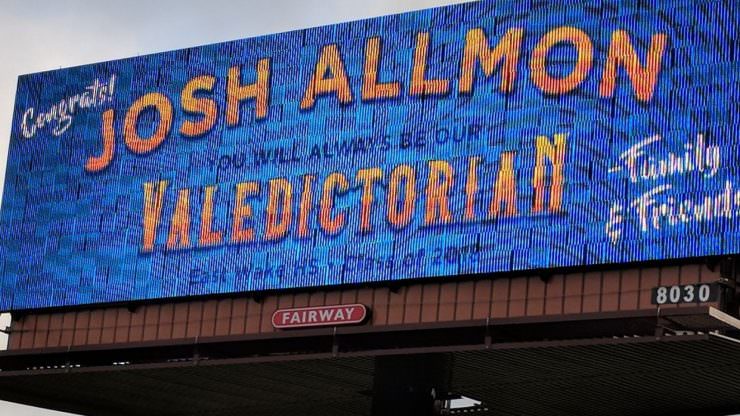 The proud father posted a photo of the billboard on Facebook, which reads “Joshua Allmon will always be our Valedictorian.”

East Wake High School and Wake County Public School Board may not recognize Josh's hard work but we will. Please if you…

Allmon wrotee: East Wake High School and Wake County Public School Board may not recognize Josh’s hard work but we will. Please if you are on 264 heading east towards Zebulon take time to take a look at the big digital billboard just pass the East Wake exit.

Joshua’s school recently did away with naming a valedictorian and replaced it with the Latin honors ranking system as a “better way to recognize students who may have barely missed being named valedictorian or salutatorian by several decimal places,”

The entire school district announced in May it would be making the change starting next year, but according to Josh his school decided to do it earlier. So even though Josh said his transcript shows him ranked as number one, he wasn’t given the coveted title.

“It’s a stupid rule that will hurt students down the line, but it’ll accomplish their goal of making everyone feel equal,” he wrote on Twitter.

In addition to graduating with a 5.31 GPA, Joshua participated in two sports, multiple extra-curricular activities and had a job his senior year. He even got his college tuition paid for.

The hard-working student plans to attend North Carolina State University in the fall to study chemical engineering and paper science engineering with a minor in business
www.wral.com/-our-valedictorian-wake-county-family-buys-massive-billboard-space-to-congratulate-son/17604663/

Joshua told Fox News he didn’t think his dad would actually go through with the idea.

“I was flabbergasted when I first saw the billboard, and enjoyed the recognition that it gave, but was also appreciative of the fact that it allowed for a broader message/warning to be shared,” he said
www.foxnews.com/lifestyle/2018/06/14/dad-buys-billboard-for-son-after-school-doesnt-recognize-him-as-valedictorian.html

See also  THE INDOCTRINATION ISN’T GOING AS WELL AS HOPED:

East Wake High School will be hosting Fields of Faith this year on October 11th, from 5-8:30. Everyone is welcomed to come out for a night of live music, guest speakers, testimonials, free food, and free tshirts to the first 300 people. Bring a your whole family, a friend, and your friends whole family!!
www.facebook.com/people/Garry-Allmon/100009817990473

A liberal hates on him:

If you are so accomplished do you really need another title to stroke your ego? Come on dude, you got your college paid for and obviously spoke at your graduation. Enjoy the actual benefits of your hard work and not some random title.
7 replies 0 retweets 8 likes
Joshua Allmon
– @joshua_allmon
Jun 14

I have tuition, not expenses paid for, which is about half of it. Plus I did not get to give a speech, I got to introduce the guests. It’s not all about the title though if you paid attention to the story; the policies will hurt high achieving students in the long run.