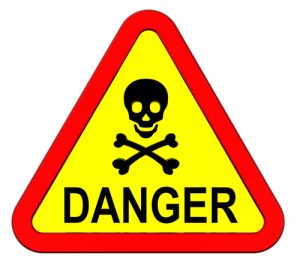 Remember how excited you were when you got your first “real job”? It was early January and I was fresh off active duty. I began washing cars at an auto dealer – for $1.00/hour. I’d wash off the snow and grime from every car on the sales lot. It was freezing cold. I quickly realized what I didn’t want to do for my life’s work.

My mother said “Pure Oil is advertising for office help. Maybe you should apply.” I grabbed my only white shirt and tie and got hired. Salaries for someone with no experience was $250/month ($3,000/year). I was excited – I was making $1.44/hour! I was still at home, basically broke, but at least I wasn’t outside freezing.

I looked at my 2017 social security statement and wondered how it compared to my first job. The US Inflation Calculator answered my question: 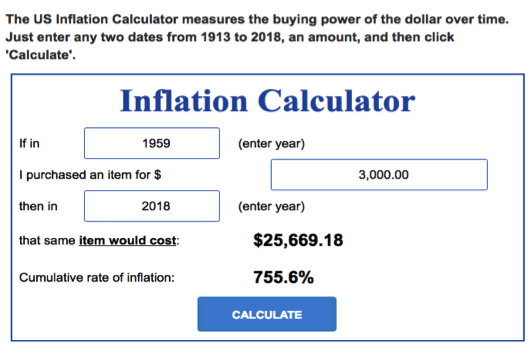 Today it takes $25,669 to maintain the same buying power as my entry-level clerical job. I’ve gone full circle, despite paying maximum social security taxes for decades, that’s about what I receive in benefits today.

The Motley Fool reports, “How Big Is the Average Person’s Social Security Check?”:

The buying power of the average male benefit is 26% below my entry-level job.

Healthcare.gov provides information about the Federal Poverty Level. The amount is used to calculate eligibility for other government benefits. For individuals, the poverty level is $12,140 and it’s $16,460 for a family of 2.

Is inflation good or bad?

It depends! The highest inflation in most of our lives came during the Carter years.

The inflation calculator tells us the accumulated inflation was 59.9%. If you bought a $20,000 automobile on 1/1/77, and prices increased at the inflation rate, that same vehicle would cost $31,984 – just five years later!

Who benefits from inflation?

In 1977 we moved to Atlanta. I had a good job, growing family and a significant mortgage. While prices were increasing rapidly (I was furious about gas prices), my salary was rising. With each passing month, our house payment became a smaller portion of our income.

Inflation favors debtors because they are paying down their debt with depreciated dollars. Generally, most residential real estate will appreciate with inflation. If you are still working, and your income is rising accordingly, your debts become easier to pay.

Who benefits the most? Who are the biggest debtors? Governments all over the world! Politicos know it is impossible to keep all their political promises or pay off the accumulated debt. By design, they inflate their way out of debt, borrowing money today and paying it back with depreciated dollars in the future.

Who is hurt the most by inflation?

Despite a law indexing social security benefits to inflation, your monthly benefit is unlikely to increase – and it could go down!

Our article, “An Inconvenient Truth About Social Security”, outlined how government medical premiums (deducted from your social security) are rising well ahead of the inflation rate.

A little known “hold harmless” provision protected the majority of retirees. It mandated Medicare Part B premiums could not be raised if it reduces social security benefits.

USA Today tells us that protection recently (and quietly) disappeared:

“In order for you to be among those …. held harmless …. you must have been enrolled in Part B before 2017 with premiums deducted from your Social Security check. If you’re delaying Social Security benefits but are benefiting through Medicare Part B, the protection would not apply ….

…. Hold harmless also does not apply to those 5% of beneficiaries who fall into high-income brackets.”

The Peterson Foundation tells us, “Social Security will run a cumulative cash deficit of $2.8 trillion between now and 2034.” 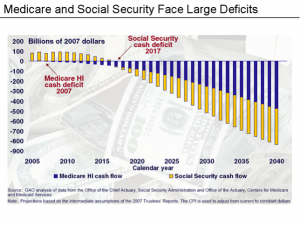 Social security is a fraction of the bigger problem. The US Debt Clock shows government debt has now surpassed $21 trillion. That does not include social security which is included in the $112 trillion of “US Unfunded Liabilities”.

UN-funded??? What about the trust fund? Historically government social security income exceeded benefits paid out. The government spent the excess and put IOU’s in the trust fund. Today’s expenditures exceed revenues. Now the government must borrow to meet the promises – on top of the rest of the federal budget.

What about future inflation?

In 2017 the average male benefit is approximately $19,000 (before medical premium deduction). Here’s a great tool for calculating future inflation.

Can we depend on only 2% inflation?

Our friend Jeff Clark at GoldSilver.com paints a different picture in his recent article, “Here’s What Inflation Could Look Like in 2020, Based on Past Surges”:

“I ran across a study by Amity Shlaes …. Her research found several examples from the past 100 years when US inflation started mildly but then soared to alarming levels. What’s perhaps even more startling is that those inflationary spikes occurred within just two short years.

Check out how much the rate of inflation rose during these periods: 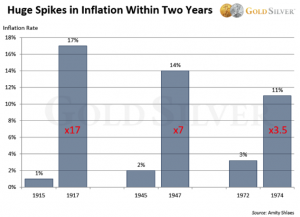 …. There is clear historical precedence that inflation can rise suddenly and rapidly and that prices can quickly spiral out of control. It would thus be dangerous for us to assume that inflation will stay subdued indefinitely.

…. Notice these inflationary spikes occurred roughly 30 years apart. And it’s been over 40 years now since the last one…

…. Let’s apply those historical increases to today and project how high inflation could potentially be two years from now.

If we matched any of those prior rates, here’s what inflation could look like by the year 2020, based on the current 2.38% CPI reading. 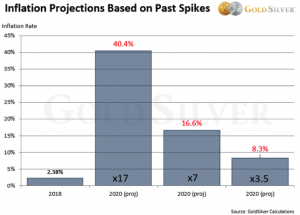 While there is not much we can do on the political side, how would your portfolio fare? Fortunately, we have control over how and where we invest.

Inflation is like carbon monoxide – tough to detect and very dangerous.

Many diligent savers and investors saw their retirement dreams go up in smoke during the Carter years because they didn’t have adequate inflation protection.

Would owning gold have really helped at the time? Only Gold supplies us with the gold prices:

The value of the USD depreciated by approximately 60% – while the value of gold tripled.

Can we guarantee gold would appreciate in the same fashion today? Of course not. Ed Steer’s Gold and Silver Digest regularly supplies charts like this one. We can only speculate why Russia has almost doubled their gold reserves in less than five years. I wonder how much gold is really left in Fort Knox? 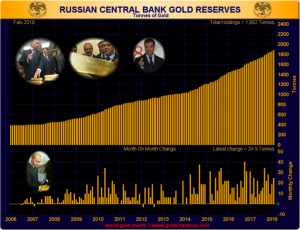 Jeff Clark’s warning that inflation can rise suddenly and “it’s dangerous to assume that inflation will stay subdued indefinitely”, is an understatement. It’s a huge risk to all retirees and savers!

Generally, inflation appears under control, until it isn’t! No one knows when it will trigger, or quite how bad it will be – but it will happen!

It’s tough enough to save and invest wisely. The catastrophic consequences of high inflation wiping out your life saving should not be ignored. Remember, there are no do-overs!

Get your FREE Special Report: