First, my views are constantly shifting.  I never see the future as a given, but rather as a set of probabilities that have yet to solidify.

As time goes on and events transpire, those probabilities begin to shift, and some areas gather more weight to them, and others lighten up.  Later on those might reverse based on new events.  Or strengthen further.

“Reality” only condenses and collapses here in the now.  Until “now” arrives everything remains a set of probabilities.  This is important because until things become “100%” nothing is certain.  Even if I said “there’s a 99% chance of…” there’s still a 1% chance that it won’t happen.

Would you buy lottery tickets with a 1% chance of winning?  Of course you would (as long as the payout was 100:1 or better) because 1% is pretty good odds.  Just ask the people in those 500:1 flood zones how improbable 500:1 is.

With that background, when I first began all this back in 2008 I weighed the odds of deflation vs. inflation at 50/50.

Now it’s much more heavily weighted to inflation at the 85% mark.  Why?  Because events have transpired.  Events like daily interventions by central banks to print money and manage expectations via jawboning.  Because the markets have become “””markets””” controlled via computer systems that I am 99.44% sure “they” have figured out how to rig and game to prevent declines and nudge things ever higher.

Also because the central banks have indicated in both word and deed that they are desperately afraid of deflation.  And because the various market participants have not rebelled even in the slightest to the overt monetization of debt or the massive increases in money supply.

This hasn’t seemed to bother them in the least: 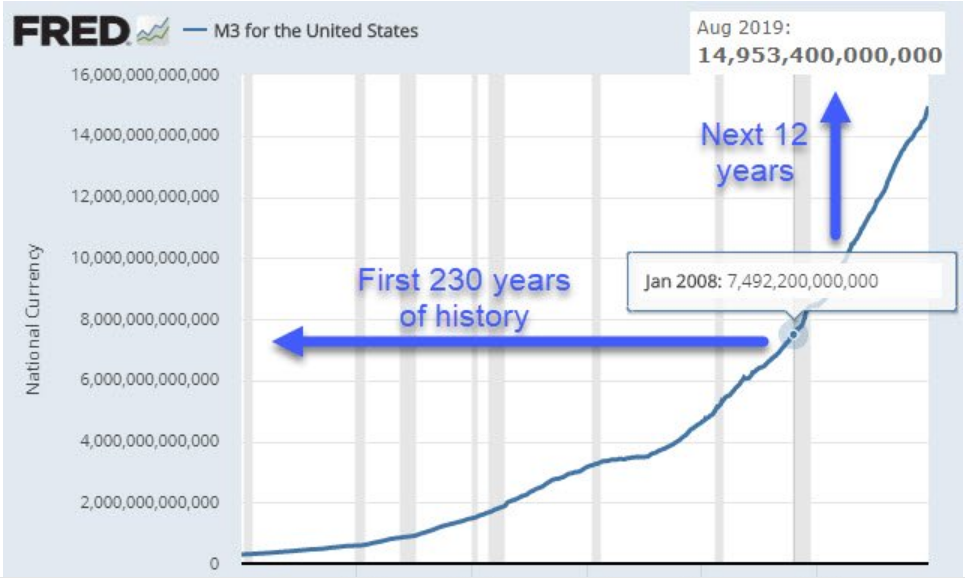 Nobody cares.  The central banks can do whatever they want and the “””market””” players are going to dance right along.

So…given all that, which boils down to the ability to print as much as they like and not have the “””markets””” do anything but cheer, what do you think the odds are of an inflationary outcome?

Well, that’s what 12 years of conditioning the players will get you.

Now, all of that said, I still think there’s a chance that deflation wins.  Something happens that gets away from them.  Maybe a war.  Maybe a major bank failure.  Maybe a huge spike int he oil price that cannot be papered over.

And then everybody cares, trillions upon trillions US dollar denominated debt suddenly scrambles for dollars, money supply shanks downward, credit aggregates go in reverse, and the financial system freezes up.

It’s Armageddon for the infinite-growth-in-debt-forever model.

But even then, what do you think happens next?  If given the choice between such institutional failure if not death, and the brilliant idea of MMT-ing $100k into ever bank account…what are the odds of those Fed wire transfers *not* happening?

The “ka” portion is likely to get smaller and smaller in both probability and in its lifespan if it does come to pass.

Of course, it could all still ‘get away’ from them, or a Volker-like figure could somehow emerge, but the odds doth shrink.