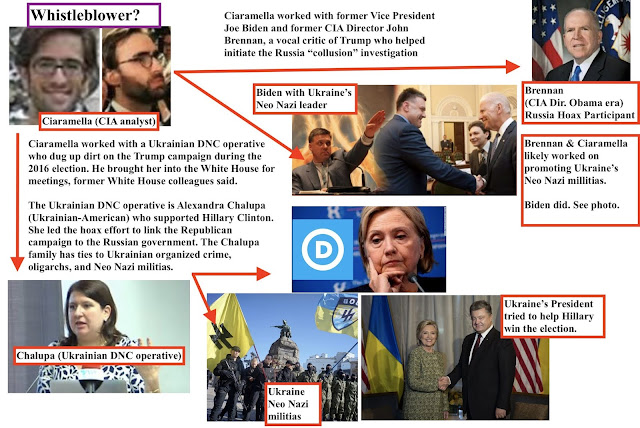 They are both Dem Operative CIA plants pushing the Deep State Neocon agenda for conflict and war with Russia.

You can tell they are not “whistleblowers” because they still have jobs at the CIA and the U.S. Military and haven’t been fired. A real whistle blower would have already been jailed – or at least facing charges for Leaking or spying using the Espionage Act.

Julian Assange is currently being murdered by the British government inside Top Security Belmarsh Prison for doing Journalism and publishing information exposing US War Crimes and corruption.

If a “whistleblower” is not persecuted by the US government, that means they are working on behalf of the CIA. There have been no exceptions to this rule in the last 50 years.

Eric Ciamarella has close ties with Joe Biden and obviously knows all about his corruption and collaboration with Ukraine’s Nazis. He is a registered Dem.

Ciaramella travelled with Biden to Kiev and was invited by Biden to lunch at the White House, a very unusual event for a low level CIA “analyst” indicating Ciamarella has political connections above his CIA rank. 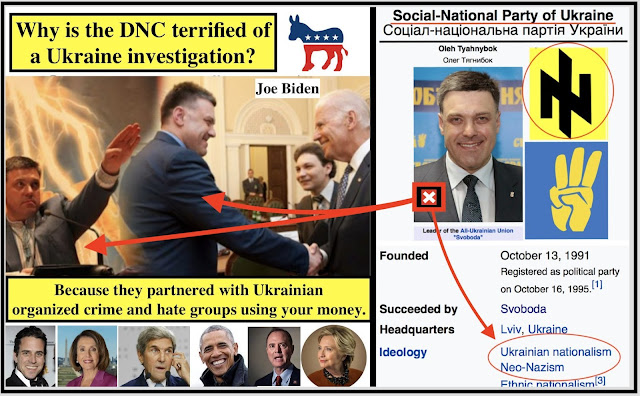 Ciaramella also has close links to John Brennan – the primary pusher of the Russiagate Hoax from within the Obama Regime in 2016.

Brennan set up a CIA Task Force in late 2015 or early 2016 to target Trump and prevent him winning the election, in what has become known as “Spygate”.
Brennan conspired with the FBI, British Intelligence (MI6/MI5) and GCHQ to illegally spy on Trump and members of his campaign.

There was also of course MI6 agent Christopher Steele’s Fake “Dossier”.  Nothing in the Steele dossier is true, except for Carter Page’s visit to an oil investment conference in Moscow in mid 2016, as part of his job as an Oil Investment Consultant. This information has always been freely available on the net and was known to the CIA and the FBI at the time.
Carter Page was regular debriefed by, and freely cooperated with, U.S. Intelligence after each of his regular visits to Russia

The above is the REAL Foreign Meddling in the 2016 election.

There is no credible evidence whatsoever of any Russian government meddling in the 2016 US election (see below).

Brennan is a high level operative for the CFR – higher than Obama was, when Obama was President.
This was the reason that Brennan was not sent to jail for the rest of his life (as he deserves), when he caused a Constitutional Crisis by using the CIA to illegally and unconstitutionally spy on the Senate staffers producing the Senate Torture report in 2013, and then lying about it.
web.archive.org/web/20191103085311/https://www.theguardian.com/us-news/2016/sep/10/cia-senate-investigation-constitutional-crisis-daniel-jones 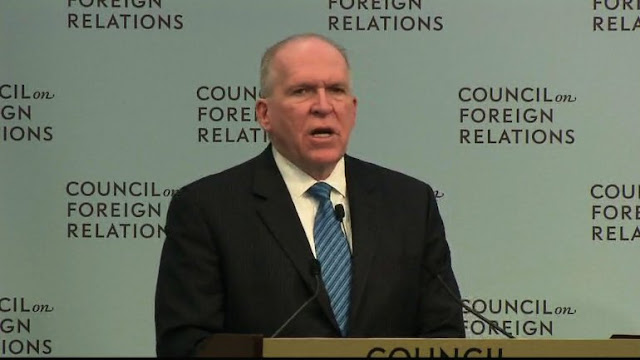 The CFR is the leading Globalist organization funded by Big Banks, large Multinationals and Oligarchs and works directly against the best interests of the 99% of ordinary Americans (and everyone else on the planet).

Ciaramella also has close links with Dem Operative Alexandra Chalupa who went to the Ukraine Embassy in DC in early 2016, asking for them to dig up any dirt they could find on Manafort or Trump. 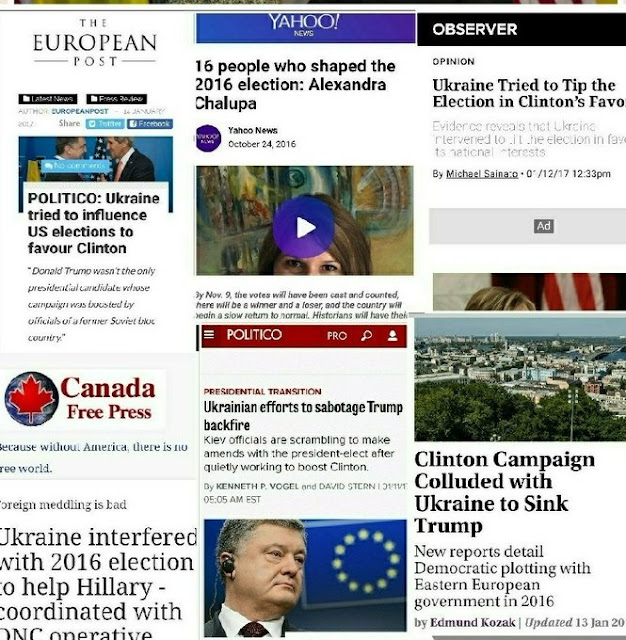 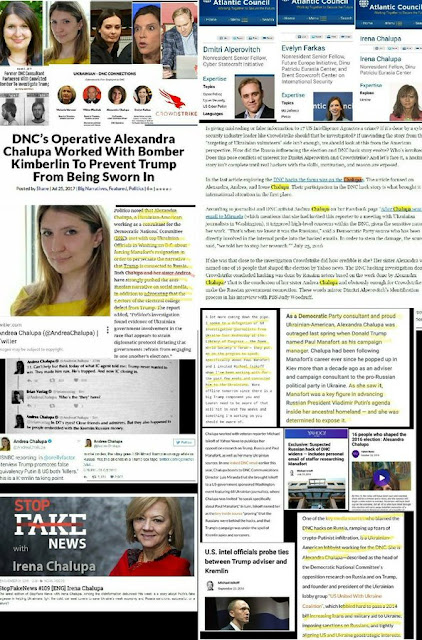 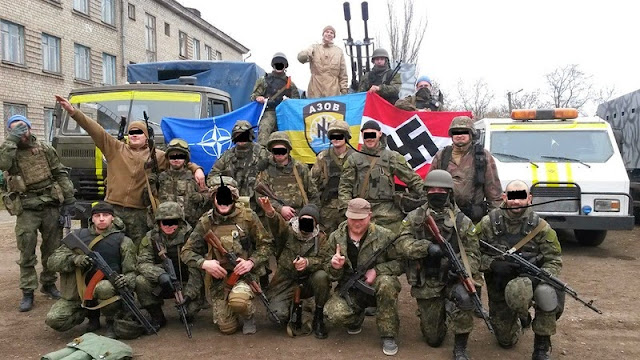 Vindman was born in Ukraine. He left the USSR when he was 4 in 1979 when his family moved to the States as Jewish refugees. He has obviously been brought up with a visceral hatred of all things Russian. Vindman is an extreme Neocon warmonger and he virulently supports the Nazis from Western Ukraine. He should never have been given any positions of influence within the US government as he has far too much of a conflict of Interest and cannot think rationally.

Vindman strongly pushed to give more weapons to the Nazis in Ukraine, so they could massacre even more civilians than they already have.
The Ukraine Regime murdered circa 50,000 people in the War that they started against the Russia supporting region of Donbass. These are massive War Crimes.
The extreme Nazi Regime in Kiev was installed by Obama in a Coup D’Etat in February 2014. using Nazi thugs and snipers murdering both protesters and police.

The primary purposes of the Coup were to start a Civil War, wreck Ukraine’s economy, impoverish ordinary Ukrainians, loot what was left of Ukrainain assets with U.S. multinationals, embezzle billions of dollars of IMF loans (see Joe and Hunter Biden), steal the large Naval Base at Sevastopol (Crimea) for NATO, and cause trouble for Russia.

Vindman is definitely NOT an analyst. An analyst gives unbiased, rational analysis, based on hard evidence – not on emotional biases that have been held since early childhood.

The Primary Purpose of the Ukrainegate Hoax

The primary purpose of the Ukrainegate hoax is to prevent Joe Biden from being prosecuted for his Corruption and Abuse of Office in Ukraine.
Joe and Hunter Biden are known to have made more than $3m from Burisma.
It’s probably a lot more than that from their share of the embezzlement of billions of dollars of IMF loans.

Joe Biden has a record of over 40 years of massive Corporate corruption in DC and links to Organized Crime.

Joe Biden was “elected” to the U.S. Senate in 1972 with the help of Teamsters Local 326 President – and Mafia hitman – Frank Sheeran
en.wikipedia.org/wiki/Frank_Sheeran

The prosecution of Joe Biden would open up a whole new “Can of Worms”, of Ukraine corruption involving John Kerry, Devon Archer, John Kerry Jr, Heinz Jr and Hunter Biden: 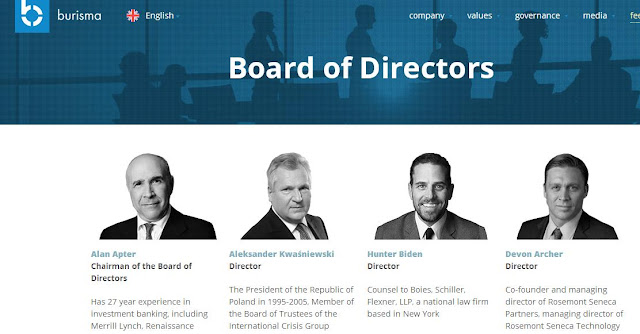 Nancy Pelosi’s son also made a pile of money in Ukraine:
Nancy Pelosi’s son Paul Pelosi Jr. (who went to Ukraine in 2017) was a board member of Viscoil and executive at its related company NRGLab, which DID ENERGY Business in UKRAINE!
twitter.com/HowleyReporter/status/1179893713214025729

Adam Schiff: Grifter, Racketeer, Warmonger.
The ringmaster of the Russia hearings profits from his antics
original.antiwar.com/justin/2017/03/21/adam-schiff-grifter-racketeer-warmonger/ 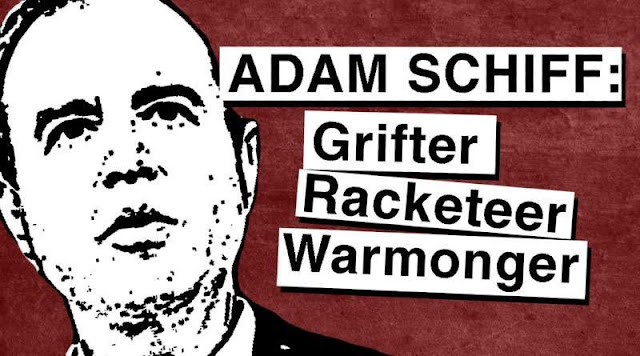 But as ever, the really big corruption involves the Clintons.

Viktor Pinchuk is a Ukrainian Oligarch who donated $10m to the Clinton Foundation.
Pinchuk hosted a conference in Yalta, Crimea, in September 2013 attended by a whole host of corrupt top Neoliberal / Neocon Globalists, including both Clintons and Tony Blair.

The purpose of the conference was to discuss the carve up of Ukraine and Ukrainian assets after the Coup D’Etat in Ukraine which was currently being arranged, by the U.S. State Department under the control of extreme Neocon Victoria Nuland (wife of PNAC co-founder Robert Kagan, a primary pusher of the disastrous 2003 Iraq invasion).

The complete historical timeline of how the US plotted & engineered the Coup in Kiev, starting in March 2013
ian56.blogspot.com/2015/01/how-february-coup-in-kiev-was-plotted.html 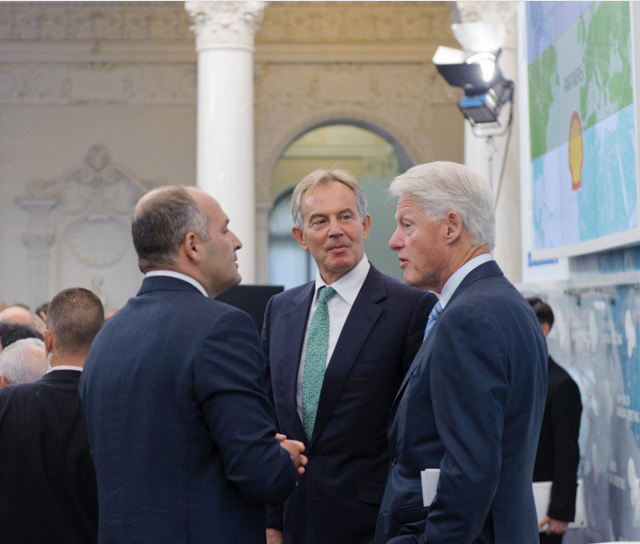 “Peaceful” protesters at Maidan in February 2014, immediately prior to the coup. 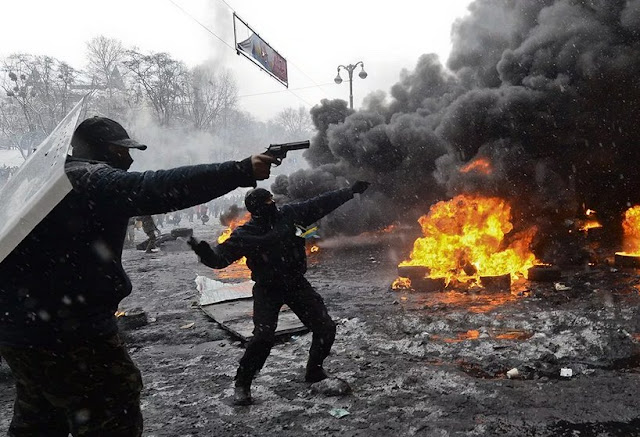 Ukraine Crisis – What You’re Not Being Told
youtu.be/fWkfpGCAAuw

The whole Russiagate Hoax was started by the Clinton Campaign in mid 2015, to deflect from the Clintons Uranium One bribery scandal.
The Clintons got over $140m in bribes from the Canadian owners of Uranium One to approve the sale of 20% of America’s Uranium Reserves to Russia.
This was obviously a National Security issue and the sale should never have been approved by the Obama Regime.

Russiagate is a complete work of fiction invented by the Hillary campaign from mid 2015, to deflect from Hillary Clinton’s massive corruption.
In fact the Clinton Campaign confirmed this themselves, in an email from within the campaign in mid 2015:

Russiagate and Uranium One
ian56.blogspot.com/2019/04/the-russiagate-hoax-and-uranium-one.html 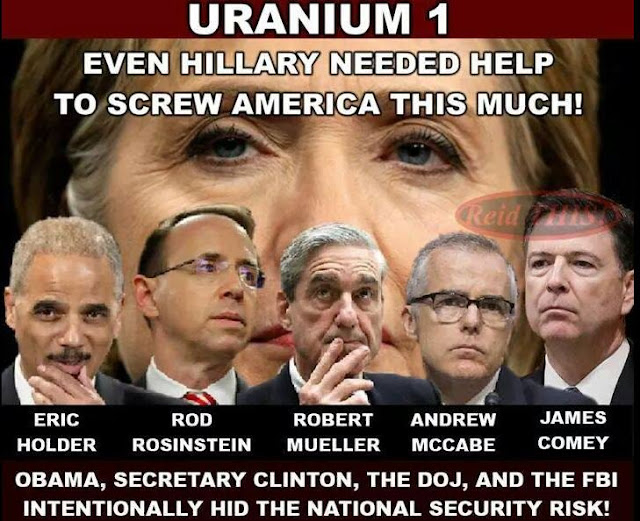 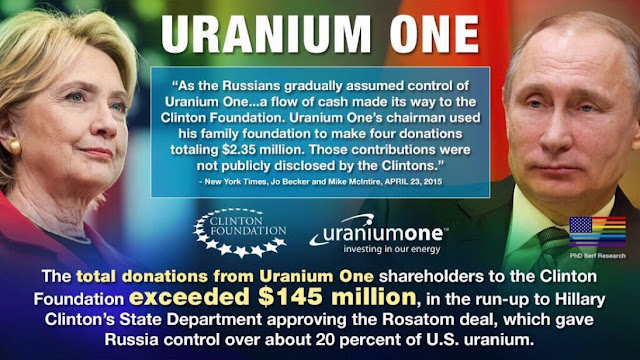 The Russiagate Hoax was continued in order to deflect from the fact that Hillary Clinton lost in 2016 because she was the worst, most corrupt, and most treasonous candidate in history (arming al-Qaeda and ISIS terrorists for Regime Change in Libya and Syria), who was a completely unconvincing liar and hired the most incompetent campaign team ever who couldn’t even find Wisconsin or Michigan on a map.

It is now being continued to increase the profits of the Military Industrial Complex and pursue the Neocon agenda of escalating conflict and pushing for WW3 with Russia.

It is very easy for anyone with a still functioning brain to see that the whole thing is a complete hoax by asking some very simple questions:

If the DNC servers were hacked, why did Neocon Fascist, DNC Chair, Wasserman Schultz refuse to allow the FBI access to the servers?

If there was any hack she would have been eager to get confirmation of that fact from someone credible, like an FBI Forensics Team.

Wasserman Schultz was fired, along with 3 other top DNC Dems, during the Dems Philly convention in July 2016, because of her massive corruption, exposed by the DNC emails, in rigging the Primaries against Bernie Sanders. 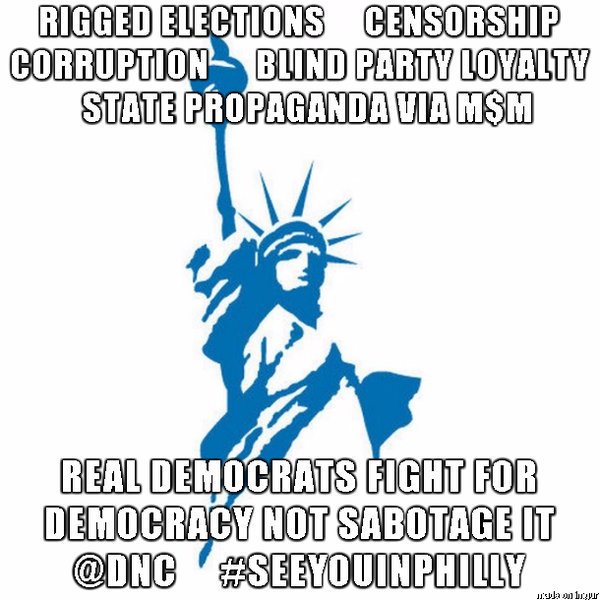 If Comey thought there was any chance whatsoever of there being a foreign hack of the DNC servers, why didn’t he subpoena access to the servers when Wasserman Schultz refused it?

That is what the FBI have done in every other case where they suspect foreign hacking and the owner of the data has refused to give them access.

If Obama thought there was any chance whatsoever that the DNC servers had been hacked by a hostile foreign power, why didn’t he order Comey and the FBI to go get a subpoena to do a proper forensics examination of the server? 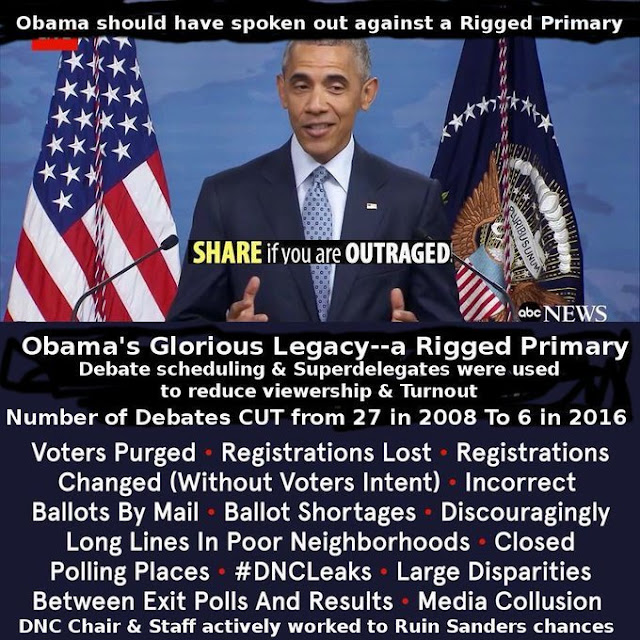 Obama even made a speech in mid October 2016, (with the corrupted polls saying Clinton was over 90% favorite to win) saying the election couldn’t be rigged and the loser should take their lumps and accept the result:
twitter.com/Ian56789/status/1076905039724232706 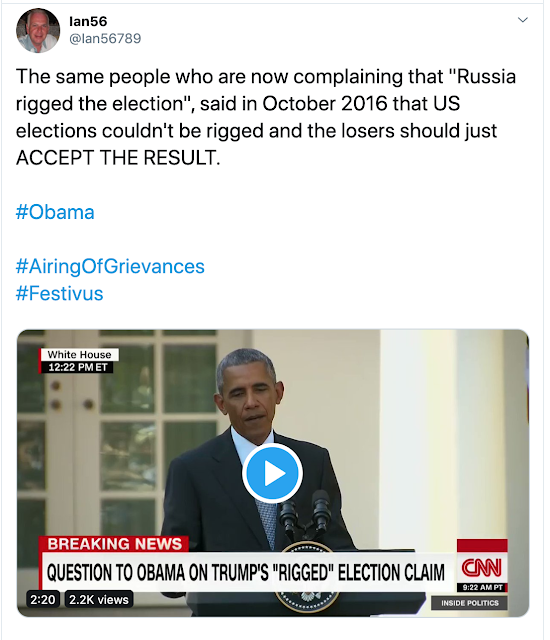 If Brennan thought there was any chance whatsoever that the DNC servers had been hacked by a hostile foreign power, why didn’t he tell Comey and the FBI to go get a subpoena to do a proper forensics examination of the server (or get Clapper to order it on the grounds of National Security)? 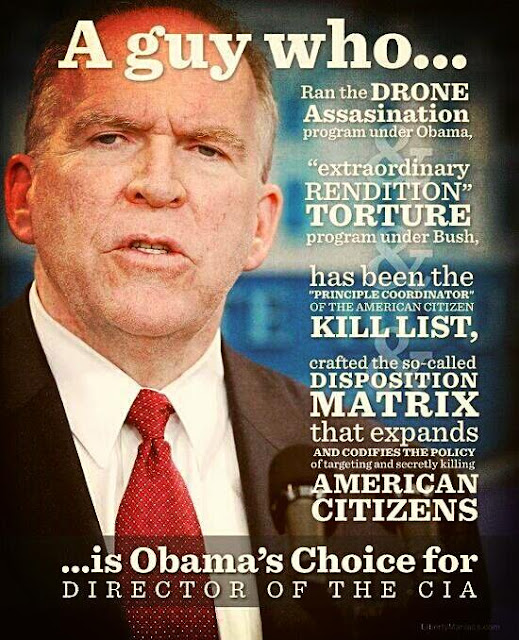 Clapper is the guy who committed Perjury to Congress by denying that the NSA was spying on millions of Americans.
A lie that was exposed shortly afterwards by Snowden’s “Revelations”. 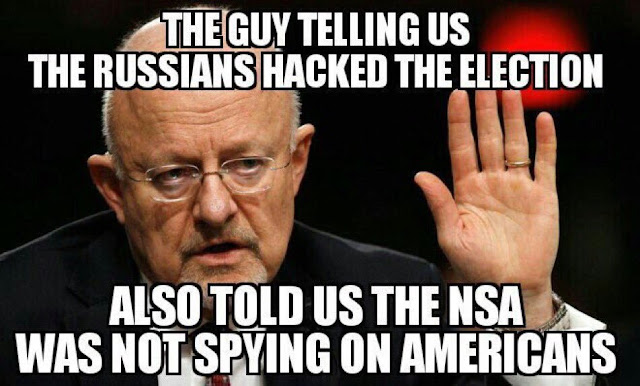 The answer to all of these questions is perfectly obvious to anyone who still has a functioning brain.

ALL of the evidence says that both the DNC and Podesta emails were LEAKED by AMERICAN INSIDERS.

And the Obama and Hillary gang invented the Russiagate lie to cover up Hillary Clinton’s corruption.

The Russiagate lie is now being continued to benefit the profits of the Military Industrial Complex, to push the Neocon / Neoliberal agenda of War with Russia, and to Divide and Conquer the American population to keep the current endemically corrupt system of Corporate Oligarchy in place:

Completely debunking all aspects of the Russiagate Hoax ian56.blogspot.com/2018/12/debunking-lies-about-mueller.html 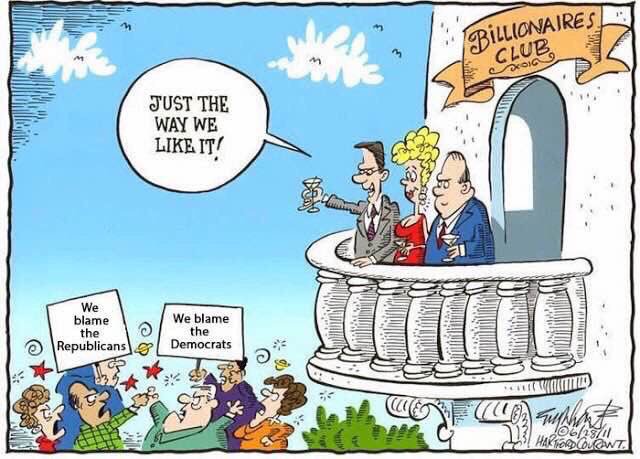 We are now in exactly the same scenario that led up to the start of WW1, which was engineered by Cecil Rhodes and his gang of Globalists at the UK’s Foreign Office.
Just swap Germany for China and Russia.

Unlike WW1, all the major protagonists in the current conflict have nuclear weapons and a hot WW3 would mean the end of human civilization and all intelligent life on the planet.

Twitter thread on the Real Origins of WW1 and the Real History of the 20th Century.

Secret History: Cecil Rhodes, The Round Tables, and the Oligarchs Secret Plot To Start WW1 – by James Corbett 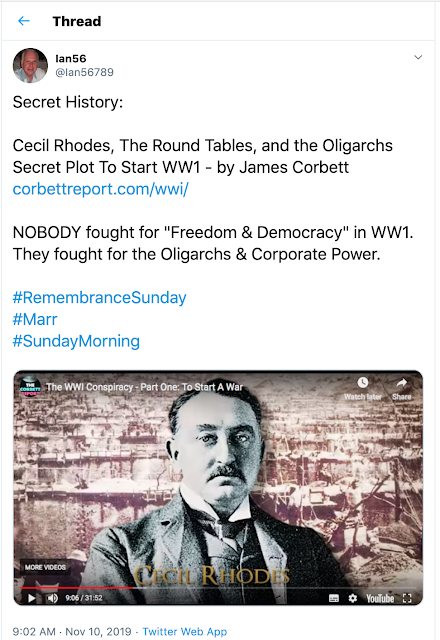 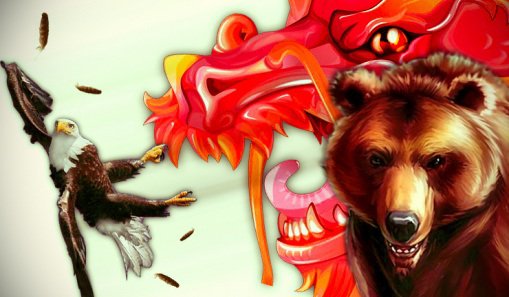 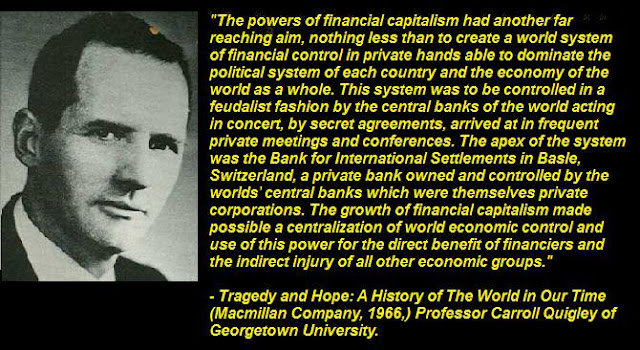