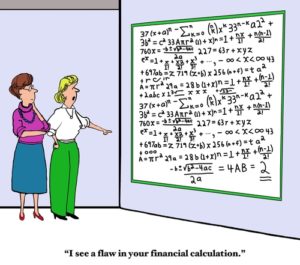 Millions of baby boomers and seniors are now discovering their retirement nest egg is not delivering like they anticipated. Unless you have a well-funded pension, your income projections are not being met.

Why? Was there a mistake in the plan? What can be done once they have left the workforce?

We hear a lot of political talk about “The rich get richer and the poor get poorer.” What about the middle class? Most worked hard, played by the rules, planned, sacrificed, saved and invested wisely in order to be able to retire comfortably.

They monitored things, adjusted and made responsible choices. They wanted to retire comfortably enjoying a middle-class lifestyle, not become part of the jet-set.

I recently read, “From Rags to Riches Again: 21 Lottery Winners Who Lost Everything.” Lottery winners went through millions and eventually ended up back where they started, or worse.

Some believe people place little value on money that they did not earn. I’m inclined to agree with Neil Boortz’, “The Commencement Speech You Never Heard”:

I interviewed Aja McClanahan in my article, “Some Young People Are Catching On”. There are countless stories about folks like Aja who described their situation as “being a debt slave” or on a “financial treadmill” who changed their lives. They built a plan, stuck with it for years and are not only out of debt, but they’re also accumulating wealth.

They changed their lifestyle, made good choices and are moving up the economic ladder.

Why do lottery winners go broke? They make bad choices! What about baby boomers and retirees who thought they were making good choices?

30 years ago, Jo and I were married with a 10-year-old daughter and starting over financially. It angered me to have to pay mortgage insurance because we did not have the required down payment for our small home.

Much like Aja, we had our “day of reckoning”. We needed to get out of debt, educate our daughter and be able to retire. We borrowed money and I went into business for myself. Jo went back to finish college.

Our business went well. Upon graduation, I hired Jo. I was on the road 40+ weeks a year and needed her badly. It took 7 years to pay off our debts. I was over 50 and tired of traveling. How much did we need to save for retirement?

Pay Yourself First And Learn To Live On The Rest!

How much should we save for retirement? Where should we invest? When can we retire? The unknowns make this a HUGE challenge!

A pension consultant helped us get started. Using the best tools available, we built a plan. If we maxed out our pension contribution, supplemented it with savings and invested wisely, we would be fine.

It worked perfectly for 18 years. We lived on what was left over and had a blast! It afforded us a houseboat, followed by a motor home that we lived in full time for a year.

We checked our plan, and with our consultant before buying big, expensive toys. The projections showed we would have more than enough to retire comfortably – go have fun!

The pension consultant cautioned us our investments were doing “too well”. The government was considering cracking down on tax-sheltered plans that accumulated too much money. We sold the stocks in the pension fund and converted over to fixed income investments. We didn’t want to incur the wrath of the government.

When it came time to retire, we were pleased. We accumulated enough to live off the interest from FDIC insured certificates of deposit with money left over.

Dad preached, “Live off the interest and never touch the principal.” Knowing we needed some inflation protection, we had bought just enough CD’s to live off the interest. The remainder went into the stock market. The system worked perfectly – for three years!

I still feel, “Pay Yourself First And Learn To Live On The Rest” was some of the best advice I ever received. However,

THERE IS A MAJOR FLAW IN THE PREMISE.

We worked hard, built a good savings plan and made good choices along the way – yet today our retirement plan is not delivering anything close to projections we made – despite monitoring the plan many times along the way. What happened? And more importantly, how do we get back on track?

Two terrible choices on the part of the government are destroying the middle class as we once knew it.

I was in my mid-20’s when the Johnson administration promoted “The Great Society”. I mentioned to friends that the government is incentivizing out of wedlock birth and creating a dependency class. On the 50th Anniversary, The Heritage Society confirmed my comments:

…. The “Great Society,” – President Lyndon Johnson, … vowed, “to give every citizen an escape from the crushing weight of poverty.”

Material poverty has declined … the average household classified as “poor” not only reports having enough food but also many amenities, including air-conditioning, cable TV, Internet access and personal computers.

It’s easy to see why it was “ever-expanding”: The War on Poverty created negative incentives. Instead of promoting the growth of healthy families, the welfare system discouraged them….”

Estimates run as high as 45% of the population that pays no taxes. The political class, regardless of party affiliation, have created a dependency class buying their votes with our tax dollars.

The cost is unsustainable.

Ron Paul’s article, “The Dollar Dilemma: Where to From Here?” is a terrific essay on how the Federal Reserve enabled the politicos:

“Our economy is burdened with multiple problems: unsustainable government deficits at all levels; unfunded liabilities; student loan debt; stagnant wages; lingering consequences of the Fed’s QE policy; … a broken educational system; a breakdown of the family unit affecting all races and classes; and excessive dependence on government benefits and special interest privileges…. (Emphasis mine)

…. People now recognize that it’s caused by the massive debt that results from excessive government spending on war and welfare. …. This constant spending beyond our means could not occur without the Federal Reserve accommodating congressional spendthrifts with endless monetary inflation. (Emphasis mine)

See also  In a court filing Trump’s lawyers admit there is no hard evidence of election fraud. Trump “subjectively believes” there was fraud.

…. There’s good reason the financial elite hysterically oppose an audit of the Fed.”

In 2008, the government bailed out the banks at the expense of seniors and savers. Every retirement and pension plan was negatively affected by the Zero Interest Rate Policies. Most plans are now underfunded. Many seniors and baby boomers saw their retirement dreams go up in smoke as their income projections fell woefully short – through no fault of their own.

How can individual citizens salvage their retirement dreams and enjoy the rest of their life?

I’ll leave the political debate to others, only saying that Constitutional amendments requiring a balanced budget and congressional term limits are a good start.

We must continue to make good choices over things which we can control.

Save more if you have income. Knowing what I know today, I would certainly have saved even more. We exceeded our target by 20% – it should have been even higher.

Back to the drawing board. Much like our “day of reckoning” years ago, Jo and I had to deal with some very harsh realities in order to make our money last.

Don’t ignore reality. Make the necessary adjustments now, the longer you put things off, the more difficult the choices.

Get professional help. Use a financial professional, even if it is just for a second opinion.

Both partners must work together. It’s sad to see seniors frustrated with each other because one partner continues to spend like the old days. “For rich or for poor” is part of the agreement. Living well beyond your means will eventually put the surviving spouse in an impossible financial situation.

Enjoy what you have. While it is easy to become very angry at the political class, all that does is raise your blood pressure. I look at friends who have two cars, nice homes, tv’s all over the house, cell phones and remind myself that we may not have as much as we planned for, however, we can sure enjoy what we have. We are surrounded by loving friends and family. Life is good!