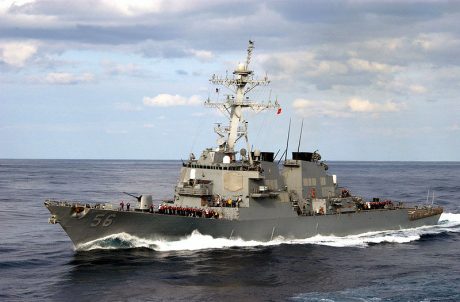 Could it be possible that it wasn’t just a “coincidence” that a naval vessel named the USS “John S. McCain” was severely damaged on the exact same day as “the Great American Eclipse”.  I have previously written about how solar eclipses have long been believed to be warnings that judgment is coming upon a nation, and this eclipse was the first in all of U.S. history to only be seen within the borders of our own country.  Tens of millions of Americans looked up into the sky to watch this eclipse take place, but it certainly wasn’t the only historic event to happen on Monday.  When a 600 foot long oil tanker rammed into the USS John S. McCain, according to local time it was already August 21st.  Many are wondering if these two events could be related somehow.
Of all the members of Congress, Senator John McCain has long been considered the most outspoken advocate for the aggressive use of U.S. military might.
And of all the vessels in the U.S. Navy, it was a ship bearing his name that was involved in this collision.  Of course this warship was not actually named after Senator McCain.  Rather, the destroyer was named after Admiral John S. McCain, Sr. and Admiral John S. McCain Jr.
You see, Senator McCain’s grandfather and father were both high ranking admirals, and that is how we got a destroyer with Senator McCain’s name on it.  If you are not familiar with the accident by now, the following account from the Daily Mail is a pretty good summary…

Ten sailors are missing and five were injured after the USS John S McCain destroyer was involved in a collision with a 600-foot oil tanker in busy Southeast Asian waters on Monday morning.
The collision between the US guided-missile destroyer and merchant vessel Alnic MC occurred east of Singapore at about 5.24am local time.
The McCain suffered ‘significant damage to the hull’ after a hole was torn in the warship beneath the waterline. It led to flooding of crew sleeping areas, machinery and communications rooms.

Could it be possible that the USS John McCain was used as a symbol to warn us that some sort of disastrous war or military incident is coming if we don’t change our ways?
And it is also interesting to note that this warship bearing John McCain’s name was damaged exactly 33 days after Senator McCain’s brain cancer was diagnosed.  The following comes from the Daily Crow…

8 days before John McCain’s 81st birthday. It is already 8/21, or the date of the eclipse in the part of the world this took place. This came 33 days after the discovery of John McCain’s brain cancer diagnosis and today is 33 days before Revelation 12 sign.

Also on Monday we learned that after 16 years (8 + 8) in Afghanistan, the U.S. military will be making a renewed commitment to that conflict.  This is already America’s longest war by a wide margin, and there is no end in sight.
I have already shared so many numbers regarding this year in general, and the solar eclipse specifically.  But before we wrap up this article, let me throw just a few more at you.  The following comes from Pastor Mark Biltz…

“I do believe we are headed for major judgment, based on scientific and historical data tied to biblical prophecy. In Matthew 24, Jesus discusses His coming as being similar to the days of Noah and Lot. He also ties the generation that will see His coming to the restoration of the nation of Israel.
“The timing is significant. God gave Noah’s generation a 120-year warning. It just so happens this year is the 120th anniversary of the first Zionist Congress held by Theodore Herzel on August 29, 1897. It also just so happens that very day was the first of Elul, and here we have the eclipse happening at the new moon of the month of Elul, beginning the month of repentance! This year is also the 100th anniversary of the Balfour Declaration presented on November 2, 1917, which just so happens to be the very day Noah’s flood rains began! This is also the 70th anniversary of Israel becoming a nation and the 50th anniversary of recapturing Jerusalem!”

To me, it definitely feels like we have reached a “turning point”.  Like the rest of you, I don’t know exactly what is going to happen next, but I have written about the extraordinary confluence of events that are going to happen over a 40 day periodbeginning with the eclipse and ending with Yom Kippur on September 30th.
I certainly don’t anticipate anything too cataclysmic during the coming weeks, but I do believe that someone up there is trying to tell us something.
Are we paying attention?

5 thoughts on “Is It Significant That The USS John S. McCain Was Damaged In A Collision On The Same Day As The Solar Eclipse?”