Here I present to you the latest updates concerning breaking news coming from Israel.  I believe we are witnessing the events leading up to World War III. If you believe what Israel is saying, concerning files Mossad smuggled from Iran’s secret nuclear program, you are not alone.  However, some are saying the intelligence files are nothing new, as this was known for quite some time.

The US believes what Israel is presenting as evidence obtained by the Mossad concerning Iran’s ongoing nuclear program. President Donald Trump says this vindicates his desire to withdraw from the Iran Deal.  Others say, in fact, this proves the Iran Nuclear Deal must be maintained. 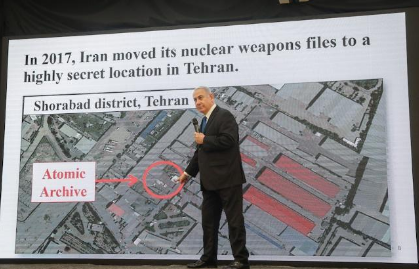 There have been reports the bombing has already started; however, as of this morning, the reports have gone dark.  So I truly do not know what to believe.

Sarah Sanders reports in the following video exactly how the White House feels about the information and the Iran Deal at this time.  President Trump has until May 12 to make a decision to withdraw or to stay in the Deal. World allies are asking him to stay in, but in light of the Mossad Intelligence, he does seem inclined to pull out.

Henry Kissinger has made the comment that Israel will not exist in 10 years.  China is demanding the US stay in the deal. John Kerry said the US will have to start all over again with Iran if they withdraw from the Deal.  Iran believes there is not doubt they will withdraw. Honestly, if the US stays with the Deal or they do not, Iran will not change their tactics.

Israel’s Mossad intelligence service broke into the anonymous Tehran building that housed Iran’s secret nuclear files and smuggled half a ton of documents and compact discs back to Israel the same night.

The New York Times in an article posted on its website Monday night quoted a senior Israeli official who spoke on condition of anonymity as saying that the Mossad discovered the warehouse in February 2016 and kept the building under surveillance since then.

Mossad operatives broke into the building in January, took the original documents, and returned to Israel the same night, the official told the Times.

In his nationally televised broadcast, first in English, on Monday night, Israel’s Prime Minister Benjamin Netanyahu described the hiding place of the documents. “This is where they kept the atomic archives. Right here. Few Iranians knew where it was, very few, and also a few Israelis,” Netanyahu said. “Now, from the outside, this was an innocent looking compound. It looks like a dilapidated warehouse. But from the inside, it contained Iran’s secret atomic archives locked in massive files,” he said.

On stage with Netanyahu were shelves of binders and a moveable wall of CDs.

“And here’s what we got. Fifty-five thousand pages. Another 55,000 files on 183 CDs. Everything you’re about to see, is an exact copy of the original Iranian material,” he said, adding: “You may want to know where are the originals? Well, I can say they’re now in a very safe place.”

The unnamed official told the newspaper that Trump was told of the operation to retrieve the documents by Mossad Director Yossi Cohen, when he visited Washington in January.

The material was not unveiled until now because the documents had to be analyzed, and translated from Persian, the official said.

President Donald Trump is set to decide by the middle of next month whether it will remain in the Joint Comprehensive Plan of Action, as the deal is known.

In a meeting with reporters in the White House Rose Garden shortly after Netanyahu’s presentation, Trump said that the disclosure “showed that I was 100% right” in criticizing the Iran nuclear deal. “That is just not an acceptable situation,” he also said.

Trump declined to say what he would decide on the Iran nuclear deal. “We’ll see what happens. I’m not telling you what I’m doing, but a lot of people think they know. On or before the 12th, we’ll make a decision. That doesn’t mean we won’t negotiate a real agreement,” he said.

“The United States is aware of the information just released by Israel and continues to examine it carefully,” the U.S. Press Secretary said in a statement following the presentation.

Meanwhile, Secretary of State Mike Pompeo, until last week director of the CIA, said the documents were authentic and much of it was new to US experts.

“We’re still going through it, there’s still a lot of work to do to figure out the scope and scale of it, but it is the case that there is new information about that program.”

Earlier in the evening US President Donald Trump said  “what we’ve learned has really shown that I’ve been 100 percent right.”

“That is just not an acceptable situation, and I’ve been saying that’s happening,” he went on in the White House Rose Garden, alongside Nigerian President Muhammadu Buhari. “They’re not sitting back idly; they’re setting off missiles, which they say are for television purposes? I don’t think so.”

The American leader also declined to share whether he’s decided to walk away from the landmark agreement by May 12, the next deadline to waive sanctions against the Islamic Republic under the deal. Trump last signed those waivers in January, but he said he would not again unless Congress and European allies amend the pact.

Someone I trust and like very much has spoken out.  Sen. Ted Cruz (R-Texas) on Monday praised Prime Minister Benjamin Netanyahu for his “stunning revelations” about Iran’s nuclear program, saying they prove that the nuclear accord signed with Tehran was “truly catastrophic.”

“Today’s stunning revelations by Israeli Prime Minister Benjamin Netanyahu powerfully demonstrate why the Obama Iran nuclear deal is not just unfixable, but truly catastrophic,” Cruz said in a statement, adding that the prime minister’s presentation was “remarkable” and “unprecedented.”

French President Emmanuel Macron nor German Chancellor Angela Merkel visited President Trump truly believing they could change his mind, and I think there will be a battle between Europe and the US when Trump gives his most likely decision to pull out.

Make no mistake, if Trump withdrew from the Iran Deal – while Tehran is supposedly holding up their end of the bargain, he will bring about the alienation of the United States from its European allies. This is the one facet in this decision that concerns me.  I don’t think Iran is going to change whether we stay or leave. I think they have one goal only, and that is to become a nuclear power. I know some of you think Iran is benign, but I do not agree with you.

Germany’s foreign minister says the Iran nuclear agreement “prevented a nuclear arms race in the Middle East.” The International Atomic Energy Agency in Austria is charged with monitoring Iran’s activities confirms that Iran is in compliance with the toughest standards ever agreed to in a nonproliferation framework.

Let's go through Netanyahu's dog-and-pony show. As you will see, everything he said was already known to the IAEA and published in IAEA GOV/2015/68 (2015). There is literally nothing new here and nothing that changes the wisdom of the JCPOA. 1/10 pic.twitter.com/F6v9jYFCGE

Netanyahu has continued to insist the value of the documents Israeli intelligence reportedly smuggled from a warehouse in Tehran, announcing that he was speaking to the leaders of Russia, France, Germany, the UK and China.

He claimed Iran had lied about a secret weapons program, Project Amad, when claiming its nuclear activities were completely peaceful.

Returning from a trip to the Middle East where he met with Netanyahu, Mike Pompeo, the new US Secretary of State,, said he had viewed the documents himself.

“This makes very clear that, at the very least, the Iranians have continued to lie to their own people,” said Pompeo.

Trump has called the nuclear accord the worst deal ever negotiated, and threatened to reimpose US penalties unless Britain, France and Germany can fix its “flaws”. The deal lifted economic sanctions on Iran in return for curbing its nuclear programme.

Most world powers, however, say the nuclear deal is working as intended for now and is the best way to keep Iran from acquiring a nuclear arsenal.

According to a monitor, the missile strikes killed 26 pro-Syrian government fighters, a majority of them Iranian.

Unidentified Iranian officials called reports of Iranian casualties in the attacks “baseless”, while the Israeli military said soon after the latest bombing raids that it did not comment on foreign reports.

However, the attacks, whose origins have yet to be confirmed, came after Israel bombed the T4 airbase in Syria in February and days after the Israeli defence minister, Avigdor Lieberman, said Israel would attack Iranian assets in Syria if they were deemed a threat.

Damascus and Tehran also accused Israel on 9 April of conducting deadly strikes against a military base in central Syria.

The U.N. nuclear agency says it believes that Iran had a “coordinated” nuclear weapons program in place before 2003, but found “no credible indications” of such work after 2009.

The agency issued its assessment on Tuesday, a day after Israeli Prime Minister Benjamin Netanyahu released what he said was a “half ton” of seized documents proving that Iran has lied about its nuclear intentions.

The documents focused on Iranian activities before 2003 and did not provide any explicit evidence that Iran has violated its 2015 nuclear deal with the international community.

But it noted that in its 2015 report, its board of governors “declared that its consideration of this issue was closed.”

Yoav Galant said on Tuesday “anyone who saw the intelligence achievement can also understand what our military capabilities are.”

Israeli Prime Minister Benjamin Netanyahu unveiled what he said was a “half ton” of Iranian nuclear documents collected by Israeli intelligence, claiming it proved Iranian leaders covered up a nuclear weapons program before signing a deal with world powers in 2015.

Netanyahu’s speech Monday was delivered in English and relied on his trademark use of visual aids. He claimed the material shows Iran cannot be trusted and encouraged President Donald Trump to withdraw from the deal.

In conclusion, we are witnessing a worsening of world events – bottom line.  I do not see a difference of opinion of any importance – it is what it is.

Do you believe what Israel is presenting?

Or do you believe there is no new information deemed from Israeli intelligence?

Israel is pushing President Donald Trump to withdraw from the Iran Deal.

It looks like Trump will comply with this push from Israel.

However, many US allies are encouraging Trump to stay with the Iran Deal.

War or no war?  It does NOT remain to be seen, war is a reality now – no one will say this, but it is true.

The bottom line is very well stated in the following video – from CNN as of May 1, 2018.