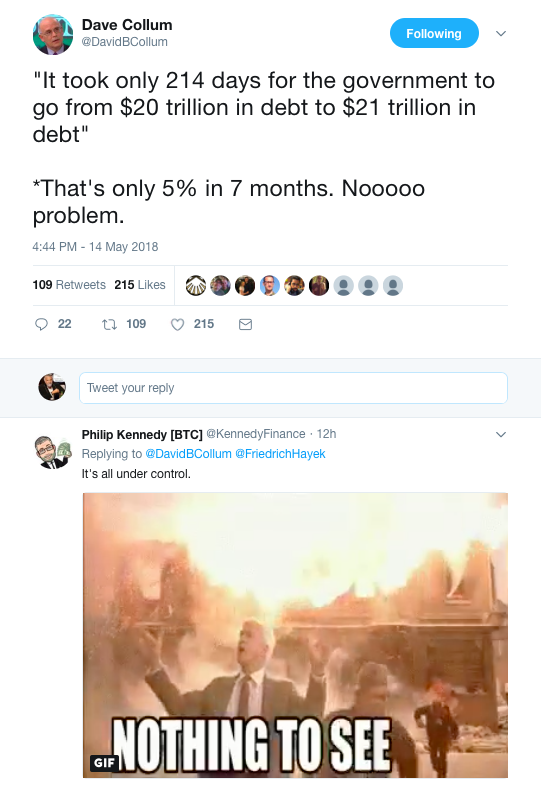 Notes From Underground: The Mother of All Debt Crises

Everything in global financial crisis emanates from too much debt being unable to be serviced. The current situation in Argentina is that the state and private sector borrowers won’t be able to pay the INTEREST on its dollar-based loans as the PESO weakens. It takes more domestic currency to purchase the needed dollars to pay creditors, resulting in a NEGATIVE FEEDBACK LOOP that brings the economy to a crawl as all the economic actors have to find ways to pay the interest costs or go bankrupt. The Argentinian government won’t go bankrupt. But it will force a debt restructuring if its borrowing costs move higher (yet another burden for a debt-plagued economy).

Argentina is far from the only global problem as its debt load is far too small compared to many other regions of the world–Turkey, China, Illinois–including the mother of all, the European Central Bank. The ECB has accomplished building a massive balance sheet in which it has accumulated the sovereign debt of European nations dependent on the ECB maintaining a policy of ultra-low interest rates to insure against rising interest rates.

Italy runs a DEBT-TO-GDP ratio of 132% but is able to borrow 10-year debt at 1.87%, much lower than the U.S. rate of 2.97%. In measuring the short-term duration of 2-year notes the situation is even more ABSURD. Italian yields are -0.27% while the U.S. 2-year is a positive 2.54%, which results in a differential of 2.81 percentage points. Even with the ridiculous bank-manipulated rates the Italian government has not been able to shrink its debt-to-GDP ratio as its economy grows at a very tepid rate … reductio AD ABSURDUM.

Ambrose Evans-Pritchard’s May 10 column in the London Telegraph–titled “EU Officials Braced For ‘Nightmare Scenario’ As Anti-Brussels Radicals Prepare to Govern Italy”–further expounded on the Italian situation. Evans-Pritchard cited the Lega’s chief  economist Claudio Borghi as maintaining that Italy will do what it needs to in order to stimulate economic growth.“Mr. Borghi said his party would refuse to rubber stamp Brexit policies imposed by Berlin.” As this blog has discussed for many years, Italy has the leverage over Brussels because the Draghi-led ECB has been the largest buyer of Italian debt in an effort to send euro-area interest rates to levels that are beyond any meaningful risk valuation.

As Evans-Pritchard noted: “It is a hazardous moment for Italy to start awakening the global bond vigilantes. The ECB is to wind down its debt purchase programme by the end of the year, depriving the Italian treasury of a backstop buyer for its debt. The country has a refinance debt equal to 17pc of GDP this year, one of the highest ratios in the world. A study by HSBC concluded that the ECB has mopped up half the gross supply of Italian debt during the QE phase and shaved at least 100 basis points off Rome’s borrowing costs,flattering the fiscal profile.”

Even more important: “The worry is that Italy has continued to suffer chronic capital flight even during the economic recovery. The proceeds from QE have been recycled out of the country into accounts in Germany and Luxembourg. The Bank of Italy owes 426 Billion euros to its ECB peers through the internal Target 2 payment system. This was supposed to self-correct. It has not done so.”

The Italian banking system is so fragile that Italians hold euros in other European banks in order to avoid any type of bail-in program, which would lead to losses of bank deposits. The large Target2 imbalances provides the Italians with great leverage in any negotiations over the fiscal policies of the Lega and Five Star. Remember, Italy is not Greece because any concern about Italian solvency will send the international financial system into contagious paroxysms. The Italian sovereign bond market is the world’s third largest.

READ  Jason Burack: Before Full Yield Curve Control – Another Operation Twist By The Fed To Prevent Yields From Rising?

There was a Financial Times piece by Claire Jones titled, “ECB Head Draghi Back France’s Call to Complete Banking Union,” which fanned the flames of a narrative devoid of reality. The article picks up on Draghi’s April press conference when the ECB president proclaimed that he would be ready and willing to offer advice to the EC concerning the harmonization of European Union fiscal policy and of course a unified banking union. French President Macron has been pushing for a “stronger eurozone, more deeply integrated, with its own budget allowing for investment and convergence.” The problem for Europe is that the actions of ECB President Draghi over the past five years have raced ahead of the political support of many European nations.

In an effort to do “whatever it takes” to preserve the euro currency, the ECB has taken on the credit risk of the entire European system. But as the giant of German economics Otmar Issing has warned, the ECB’s actions have been a project of the Brussels elite, yet the German electorate was never polled as to how far they wished to go in BACKSTOPPING the EU system: “no taxation without representation.” It is the good Bavarian Burghers who will be asked to the shoulder the financial responsibility of the ECB’S balance sheet. The political winds are already blowing against the support for a harmonized banking system as the Dutch, Austrians, Danes and Finns are reticent to take on the Italian banking risks. Non-performing loans are still floating around the system because otherwise the Italian banking sector would be rendered insolvent…