Big banks are the scorpion. They will always take on far more risk than is prudent, more than they are legally allowed and in any way, shape, or form they can. It is a seminal rule of markets. It’s what they do.

Big banks will press their bets to doomed-to-fail levels. Every time. They will reap the outsized gains while things are going well (or the Fed props up everything), then feign surprise when it all comes crashing down. Then demand you pay for it, while they give themselves bonuses, change nothing, and prepare to do it again.

The banks are the scorpion. Only they get to drown everyone else at no cost to themselves. 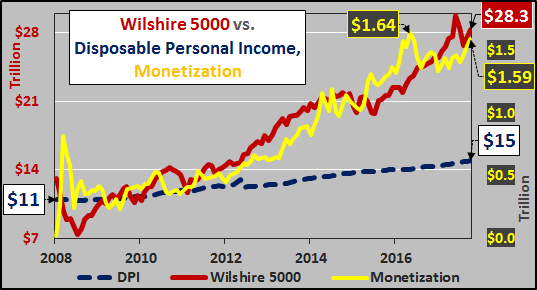 So the takeaways should be; (1) financial valuations are way out of whack with their long term relationship with DPI but (2) as long as banks are more interested in employing excess reserves than taking the rising interest paid on excess reserves…and continue to pull their reserves significantly faster than the Fed reduces its balance sheet, then financial assets are likely to continue rising as the hot money looks for a home.

Of course, further rate hikes, accelerations in reducing the balance sheet, or lemming like risk aversion…and this trend could turn on a dime.

So long as monetization continues, the impacts will be enriching the minority with significantly higher asset valuations and rental income while impoverishing the vast majority as costs rise significantly faster than most incomes.

The flipside of zero or negative monetization appears to be a fall back to the support of the real economy represented by disposable personal income (about 50% from here…but of course, a repeat of ’29 with assets falling up to 90% is easily in the realm).

The options appear to be a slow and painful cancer or a sudden crash…pick your poison well but know you won’t recover from the cancer…but you may get better after the crash.

See also  Wow … Central Banks are now saving the planet with their activities. Corporate media narrative memo has gone out.