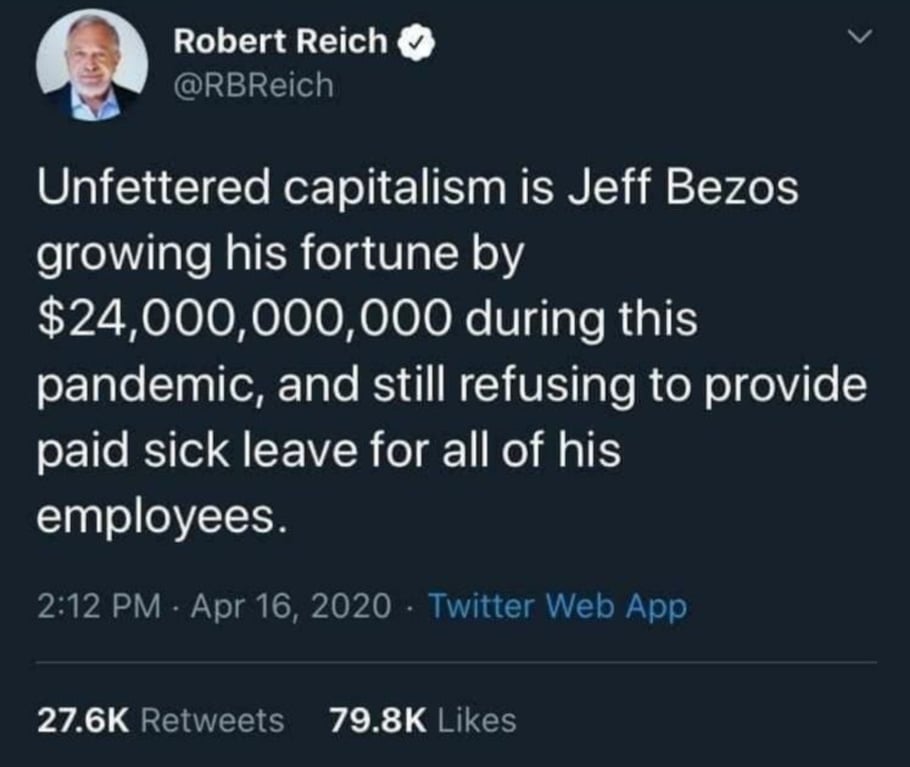 ‘Heads we win, tails you lose’: how America’s rich have turned pandemic into profit As 26 million Americans lose their jobs, the billionaire class has added $308bn to its wealth

Never let a good crisis go to waste: as the coronavirus pandemic sweeps the world, America’s 1% have taken profitable advantage of the old saying.

Some of the richest people in the US have been at the front of the queue as the government has handed out trillions of dollars to prop up an economy it shuttered amid the coronavirus pandemic. At the same time, the billionaire class has added $308bn to its wealth in four weeks – even as a record 26 million people lost their jobs.

According to a new report from the Institute for Policy Studies, a progressive thinktank, between 18 March and 22 April the wealth of America’s plutocrats grew 10.5%. After the last recession, it took over two years for total billionaire wealth to get back to the levels they enjoyed in 2007.

Eight of those billionaires have seen their net worth surge by over $1bn each, including the Amazon boss, Jeff Bezos, and his ex-wife MacKenzie Bezos; Eric Yuan, founder of Zoom; the former Microsoft chief Steve Ballmer; and Elon Musk, the Tesla and SpaceX technocrat.

The billionaire bonanza comes as a flotilla of big businesses, millionaires and billionaires sail through loopholes in a $349bn bailout meant to save hard-hit small businesses. About 150 public companies managed to bag more than $600m in forgivable loans before the funds ran out. Among them was Shake Shack, a company with 6,000 employees valued at $2bn. It has since given the cash back but others have not.