A major breakdown is in progress for the USDollar index. It has broken its intermediate uptrend which began in April 2018. Eighteen months of official rate hikes and tremendous hidden activity with derivative bond purchases, which obscure the absent USTreasury Bond buyers, have finally weighed on the King Dollar. The USEconomy suffers from 20 key breakdown signals, about which the lapdog press refuses to report. The historical tightening has turned into a failed experiment, an attempt to return to normalcy when no such event can possibly occur. Ponzi Schemes cannot be gradually unwound. The USGovt debt has gone past $22 trillion. The USGovt deficit this year is set to surpass $1.3 trillion. The missing money volume for the USGovt, a fat pig exploited by various departments, is conservatively estimated at $21 trillion. The global bond market investors no longer expect the USGovt debt to be repaid, as a failure mindset has crept into the bond arena. Given the repeated treatment since 2008, with expansion, the USTreasury Bond has become the global subprime bond. Next comes the reversal of monetary policy, where the US Federal Reserve begins to do emergency rate cuts in sequence. Expect some big name corporations to be monetized. The USDollar will be harmed, Gold will surely rise, and Oil will likely fall. A very valid point must be made. In past financial crises, the United States drew $trillions in capital from foreign markets. Next the opposite will occur, as foreigners will remove $trillions from their US holdings in both stocks and bonds. The US will be left to defend itself with corrupt devices. Gold will respond.

The uptrend is clear from April 2018 through May 2019. It has been broken, but so far without much power. It is in the early stage of breaking the intermediate trend. Watch for the Moving Average bearish crossover to occur. The 20week MA is at 96.66 and the 50week MA is at 95.99 with not much time before a potential crossover. When the 20wMA goes below the 50wMA, a long parade of alarm bells will go off. Technical traders follow the Moving Average bear signal. Also watch the 95.5 level as key support, and the 93.7 level as key support. The latter is far more important. The global revolt against the USGovt debt will play out in both the USDollar and USTreasury Bond. However, expect some profound Wall Street shenanigans and treachery, where they push the US Stock market down, cause a mild panic, and direct the funds into the supposed safe haven of USTBonds. They did the same a year ago, and 20 other times in the last two decades. They protect the USGovt debt market, and work to keep the borrowing costs down. So the irony will be seen in a bond market rally in the face of the Dollar Balance of Payment crisis. 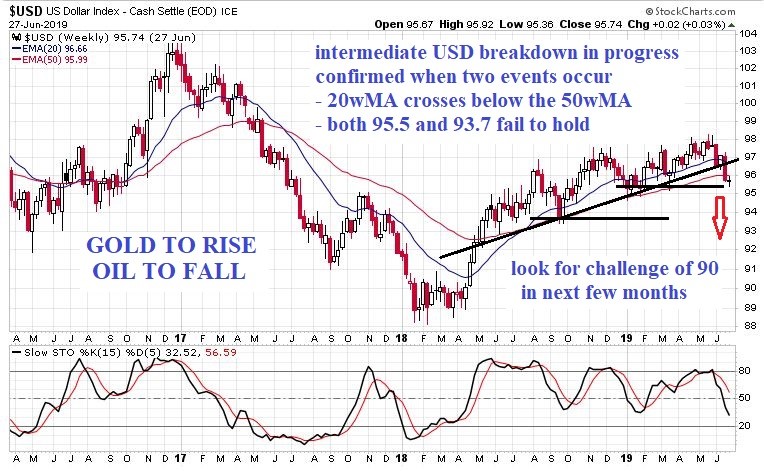 The Jackass forecasts are coming to the fore, made over the past few years:

The multi-year long-term Gold price downtrend has been broken. Holding the Gold price down should be far more difficult. The recent USFed FOMC meeting has pushed its price higher in USD terms, for a five-year high. A global revolt is on full bore. The $1400 resistance level will soon give way in a clear manner. There are 10-12 major factors pushing gold up, from USFed policy to USGovt debt levels, to dumped USTBonds globally, to anger at US-led sanctions, to rising non-USD trade. As the Jackass forecasted three years ago, the US Neocon leadership has decided to sanction its own key allies. They will earn isolation. The USGovt will be left to support its own debt by means of the most pernicious devices, internally controlled. In other words, the USGovt will deceptively purchase its own debt. This will end badly. The Gold breakout target is $1750 per oz. 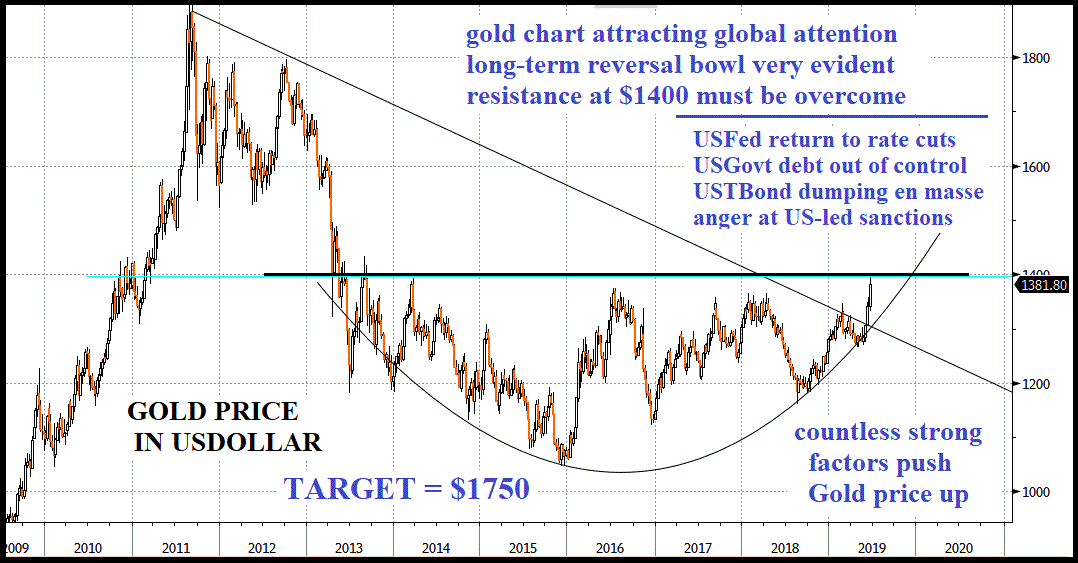 The Gold price has not registered new all-time highs in USD terms, but its breakout from the very long-term downtrend is very significant and very well noticed. The six-year resistance level of $1400 is being challenged. Just today Friday, the Asian trading took the Gold price to $1422. The New York crowd pushed it back down toward the $1400 again, but the breach has been made. Finally the Gold market has gathered significant attention. Numerous current factors are pushing the Gold price, which should very soon impressive unmistakable moves. The entire Hat Trick Letter contains justification for higher Gold price, with dozens of important critical factors at work to push it higher.The reversal pattern is extremely clear, from the 1400 top to the 1050 bottom. It defines the breakout target to be $1750, in a 350-point run which will capture global attention. The gold fever will return, at long last. The runup could happen later this year, or early next year. The two primary players in control are China and the USFed & EuroCB.

These vile central bankers are busily accumulating Gold, dumping USTreasury Bonds here and now. They are using closely aligned financial firms to manage the process. They are using double book accounting, so that nothing shows up on their balance sheet for prying eyes. They will continue to criticize Gold while accumulating, as they follow the Basel plan for exiting the grand insolvency that plagues the major central banks. They acted as buyers of last resort for 20 years, gobbling up toxic sovereign debt securities. They find themselves in a horrible bind. Their solution is vast gold accumulation. They want to buy gold from the gullible distracted deceived always shallow public.

It should be noted that the Gold price has broken out to new highs in almost every single major and secondary FOREX currency. It first broke out in the Australian Dollar, and in the British Pound. These actions fortify the movement in USD terms. A word of caution. The banker cabal, the globalist fascists, the corrupt elite uber-lords, will attempt to delay and derail the big powerful Gold market advance. They might succeed for a few weeks or a few months, but the Russians, Chinese, Indians, Iranians, Indonesians, and Turks will assure the Gold Standard arrives, is implemented, and stands. Gold will prevail over the USDollar.

The Gold price breakout has begun in Euro terms. All signals point higher. The EUR 1240 top of July 2016 will not hold. The momentum is fierce. European unity is fracturing amidst debt, yellow jacket social strife, and a cratering economy. Big moves are coming, to capture global attention. 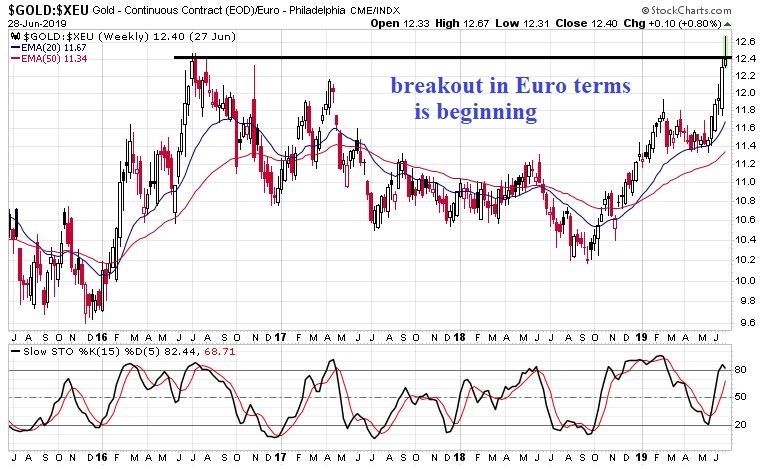 The Gold price breakout is building in British Pound terms. All signals point higher with more momentum than in the Euro counterpart. The GBP 1060 top of October 2016 did not hold. The momentum is fierce. Big moves are coming, to capture global attention. 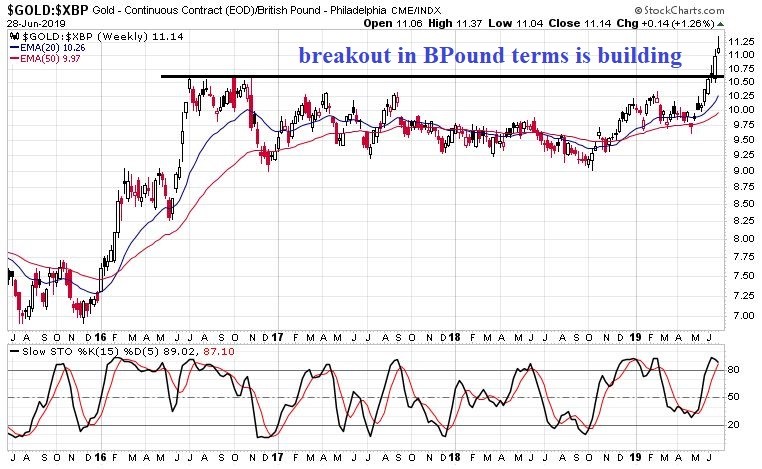 The Gold price breakout is building in Swiss Franc terms. All signals point higher with equal momentum to the Euro counterpart. The SWF 1340 top of July 2016 did not hold. The momentum is strong. Big moves are coming, to capture global attention. 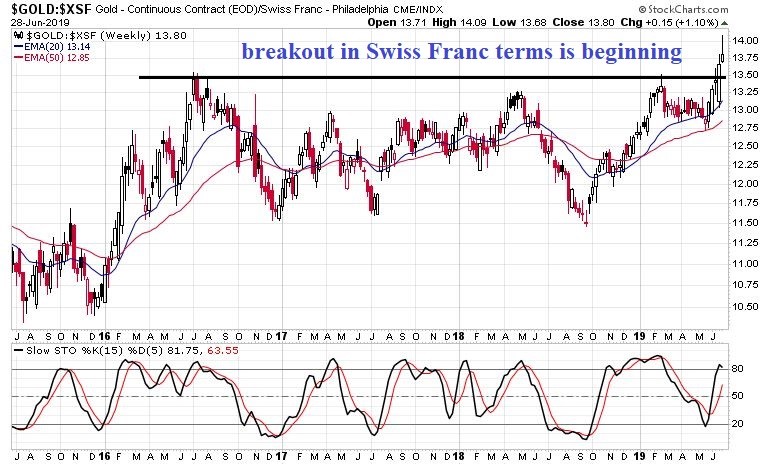 The Gold price breakout is entering another gear in Aussie Dollar terms. All signals point higher with more momentum than in almost any other major currency. The AUD 1800 top of July 2016 did not hold. The AUD 1880 top in February 2019 was also easily surpassed. The momentum is fierce. Big moves are coming, to capture global attention. 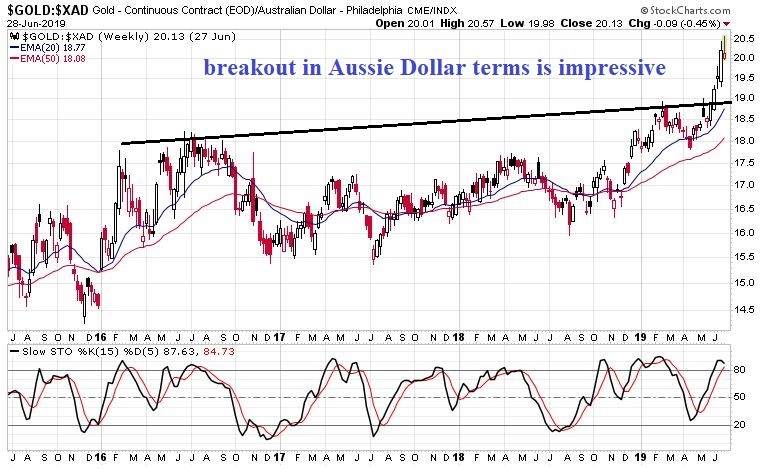 “Jim Willie’s proprietary contacts in highly strategic positions around the world help him better predict the future with an accurately as high as 90%. That is astounding! The Hat Trick Letter is my secret sauce to better understand what is really happening, so I can make better financial decisions during this tumultuous period.”

“I have continued my loyal patronage of your excellent commentaries not so much because of my total agreement with your viewpoints, but because you have proven yourself to be correct so often over the years. When you are wrong, you have publicly admitted it. You are, I suppose by nature, an outspoken and irreverent spokesman for TRUTH against power, which differentiates you from almost all other pundits on world affairs.”

“For over five years I have been eagerly assimilating any and all free information (articles, interviews, etc) that Jim Willie puts out there. Just recently I finally took the plunge and became a paid subscriber. I regret not doing this much sooner, as my expectations were blown away with the vast amount of sourced information, analysis tied together, and logical forecasts contained in each report.”

“Jim Willie is a gift to our age who is the only clear voice sounding the alarm of the extreme financial crisis facing the Western nations. He has unique skills of unbiased analysis with synthesis of information from his valuable sources. Since 2007, he has made over 17 correct forecast calls, each at least a year ahead of time. If you read his work or listen to his interviews, you will see what has been happening, know what to expect, and know what to do.”

“A Paradigm change is occurring for sure. Your reports and analysis are historic documents, allowing future generations to have an accurate account of what and why things went wrong so badly. There is no other written account that strings things along on the timeline, as your writings do. I share them with a handful of incredibly influential people whose decisions are greatly impacted by having the information in the Jackass format. The system is coming apart on such a mega scale that it is difficult to wrap one’s head around where all this will end. But then, the universe strives for equilibrium and all will eventually balance out.”

Jim Willie CB is a statistical analyst in marketing research and retail forecasting. He holds a PhD in Statistics. His career has stretched over 25 years. He aspires to thrive in the financial editor world, unencumbered by the limitations of economic credentials. Visit his free newly revamped website to find articles from topflight authors at  www.Golden-Jackass.com. It now has a hyphen in the URL address. For personal questions about subscriptions, contact him at  JimWillieCB@gmail.com.