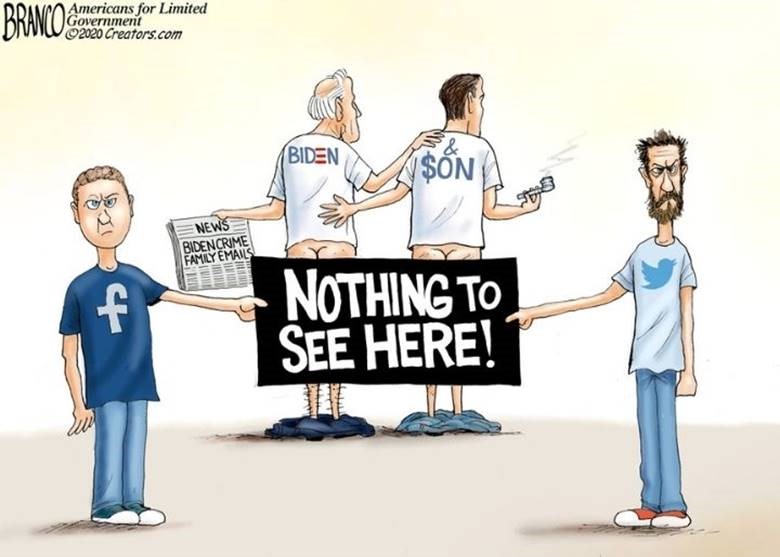 The following is a satirical meeting between Joe Biden and his son Hunter that took place last week after the New York Post’s bombshell article concerning an incriminating laptop Hunter Biden abandoned at a computer repair shop.  The owner of the shop copied the contents of the laptop’s hard drive before he turned the machine over to the FBI.  He kept a copy of the hard drive for himself and shared it with Trump associate, Rudy Guiliani, who, in turn, provided the damning information to the New York Post.  Hunter’s emails discuss how he used his father’s position as U.S. Vice President to make millions from Ukrainian, Chinese and other foreign sources.

When Joe Biden found out about the scandalous article, just weeks before the general election, he was beside himself.  He immediately called Hunter and asked him to come to his home, where he met with Hunter in his basement bunker.

The following is an imaginary conversation between the two Bidens:

Joe:  Why did you take your laptop to a repair shop operated by a Trump supporter and leave it there so he could use the salacious contents to ruin me just before I was about to get elected president.  What the hell were you thinking?

Hunter:  Listen, Pop, I have beat myself up over this mistake every single day since the news broke.  The fuckin’ machine was broke.  All I could see was a blue screen of death.  So I did what most people on the planet would do.  I went to a computer geek to get it fixed.  The guy told me it would be ready in a few days.  So, I signed the receipt he handed me and left the joint.  Like most people, I didn’t bother reading the fine print.  I didn’t know at the time that the laptop would become the shop owner’s property, if I didn’t pick it up within 90 days.  I had other things on my mind and completely forgot about it.

Joe:  C’mon man, are you some kind of idiot or were you spaced out on crack again?  You had to know the computer had all the correspondence showing details of our arrangements with foreign marks plus you also recorded yourself and some bimbo playing hide the salami.  Why didn’t you destroy the hard drive when it froze up on you and go buy another one?  I assume you know enough to back-up the files on a thumb drive every so often so you would still have copies of your personal files in case your computer crashes.

Hunter:  Backing the fuckin’ thing up is a pain in the ass.  Besides, it’s too complicated.  I know less about computers than I knew about running an energy company when I was on the Board of Directors at Burisma.  It was easier to get the laptop fixed.  I thought I had plenty of time to pick it up from the repair shop.  Unfortunately, I was wrong.  Shit happens.

Joe:  You’re right.  Shit happens when you have shit for brains.

Hunter:  Apparently, the nuts didn’t fall too far from the tree in my case.

Joe:  Don’t get fresh with me or I’ll slap you silly.  For chrissake, son, I need this like a hole in the head.  I’m having enough trouble, as it is, trying to put two sentences together without my brain freezing up just like your laptop did.  People say I’m cognitively impaired.  But, at least, I have an excuse.  I’m old.  What’s your excuse?

Hunter:  Listen, I’m under a lot of pressure.  I wish you didn’t brag on national TV when you were Veep about getting that Ukrainian prosecutor fired.  That put a big spotlight on me and that spotlight is brighter now that you’re running for president.  The whole world thinks I’m a crooked junkie who cashed in on his ol’ man’s position.  I can’t go ten feet down the street without some paparazzi asshole sticking a mic in my face.

Joe: I admit it was stupid for me to say that on camera about the guy who was investigating you and Burisma, but I couldn’t resist spiking the ball in the end zone.  At the time, it was no big deal since me and Barack had the mainstream media and social media giants in our hip pocket.  Thank God, they’re still in the tank and are covering my butt on this story.  The polls show me way ahead.  Other than the embarrassment, no real harm was done to the bottom line.  You bagged several million off that gig in the Ukraine.  Didn’t you?

Hunter: I did, but so did you.

Joe:  That brings up something else I want to discuss with you.

Joe:  My cut was only 10 percent, which is chump change.  Without me, there’s no play.  In the future, after I’m elected, my take is gonna be 25%.  And, from now on, stay away from computers.  If that repair shop owner didn’t spill the beans, it would have been some hacker doing it instead.

Hunter:  I agree.  No more digital devices for me.

(Hunter reaches into his pocket, pulls out his iPhone, throws it on the floor, and stomps on it with the heel of his shoe, breaking it into bits.)

Joe:  O.K., son, I believe you.  And one other thing, lay off the pipe and the sleazy women for a while, will ya?  You’ll be staying in the Lincoln Bedroom at the White House.  So, I need you to clean up your act.  You’re gonna be the First Son.

Joe:  Now, here’s something to chew on.  I have plans for making some serious dough before my first term is up.  Remember the Clinton Foundation and the hundreds of millions they raked in off their bullshit charity.  The Biden Foundation is next.  Only, we will build the Biden Foundation bigger and better.  And to make that happen, you need to get it together and stay that way because we’re talking serious money.  We need to be very careful with this one.  There’s a lot at stake.  No more fuckups.  Understand?

Hunter:  Yes, I totally get it.

Joe:  Son, make sure you follow the security personnel out the back door, where a limo is waiting to take you back to your hotel.  I instructed them to make sure no one sees you here today.  Keep your head down over the next three weeks.  I’ll see you at my victory celebration after I kick Trump’s sorry ass.

Hunter:  O.K., Pop.  Good luck and I’ll see you at the party when you’re president-elect.