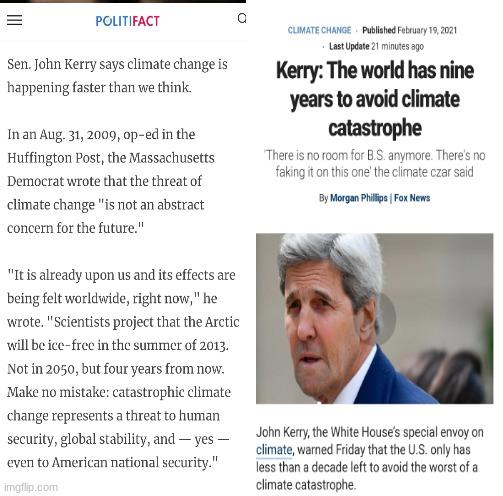 SNOWFALLS ARE NOW JUST A THING OF THE PAST:  John Kerry says Earth has 9 years to avert the worst consequences of climate crisis: “There’s no faking it on this one.”

Former Secretary of State John Kerry has a long and notable track record of being a global warming alarmist and now a climate change catastrophist. He authored many failed bills in the Senate that tried to impose carbon taxes on primary energy sources like oil, natural gas and coal, which provide 80 percent of the world’s energy.

All the while, Mr. Kerry flies around the world in his wife’s private jet living the lifestyle he publicly says is destroying the planet. This is the man President-elect Joe Biden has selected to be his climate czar and shape Biden’s climate policy.

● President ‘has four years to save Earth.’

● “A secret report, suppressed by US defence chiefs and obtained by The Observer, warns that major European cities will be sunk beneath rising seas as Britain is plunged into a ‘Siberian’ climate by 2020.”

● Warming expert: Only decade left to act in time.

A senior U.N. environmental official says entire nations could be wiped off the face of the Earth by rising sea levels if the global warming trend is not reversed by the year 2000.

He said governments have a 10-year window of opportunity to solve the greenhouse effect before it goes beyond human control.

And finally, this classic: