By Gabrielle Seunagal
Former Republican Presidential candidate John McCain attracted intense censure and scrutiny after calling for military intervention in a plethora of countries around the world and accepting donations from members of the Rothschild family. John McCain is widely regarded as a neo-conservative amongst many people in the Republican Party, engendered by his viral admission of “meeting with ISIS and staying in contact with them” and connections to George Soros, a liberal billionaire who is infamous for funding movements that contrast with conservatism. John McCain is not doing himself any favors in the political arena.
McCain has expressed his desire to attack Syria, Iraq, North Korea, Russia, and nine other countries around the world.  Over the past two decades, McCain has pushed to alter regimes in other parts of the world, despite the catastrophic results which could follow as a result. McCain possesses a pathological desire to enforce regime changes and has no qualms about using airstrikes, ground wars, special ops raids, and even military confrontation as wielders. It is unfortunate that McCain lacks the foresight to know that bombing, invading, and destabilizing will generate unnecessary wars and foment people who already view America as an enemy.
When McCain ran for office in 2008, he was accused of accepting donations from members of the Rothschild family, which utterly breaches election laws. Candidates are prohibited from accepting financial contributions from foreign nationals, a mandate that the Arizona senator was very much aware of. During McCain’s visit to the United Kingdom, he attended a fundraising luncheon hosted by Lord Rothschild and Nathaniel Rothschild. The problem arose when the Judicial Watch launched an investigation as to whether or not the Rothschilds funded the luncheon, venue, catering, etc. My guess is that all of the event’s expenses were covered on the Rothschilds’ dime. McCain is a typical politician who fancies himself as above and beyond the law.
The corruption of John McCain surpasses his warhawk predilections, trips to the Middle East, and law violations. The senator has been linked to George Soros multiple times. George Soros is a notorious left wing billionaire who funds progressive candidates, liberal causes and violent, anti-American riots. He is no ally to conservatives or the Republican Party. Any “conservative” accepting funds from Soros is clearly a neo-conservative or a trojan horse used to infiltrate the Republican Party. 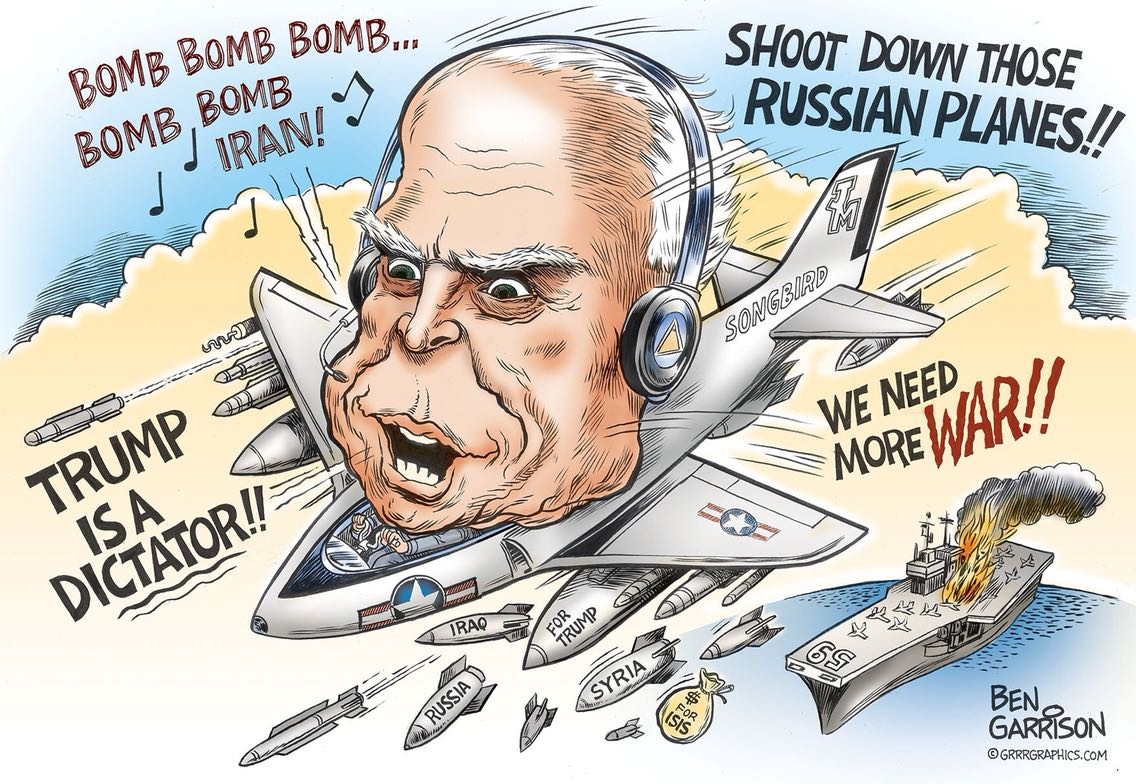 Recently, McCain drew further negative attention caused by his secret trip to the Middle East, which entailed sitting down with disreputable terrorists, such as Al Qaeda and the Islamic state. Both terrorists aim to remove Assad from Syria and create safe zones, not for the protection of refugees, but to cripple Syrian forces and carry out attacks. The action of meeting with the enemies of America is extremely catchy and calls for serious question. It would not be a stretch to arrest McCain and investigate him for treason. Further news reveals that when McCain ran for office, he asked Russia for funds, which directly violates American law. McCain has no regard for the rules of this nation and is openly conversing with our enemies.
The corruptions and scandals which engulf McCain have marked him as one of the most hated politicians and a disgrace to the conservative movement. He is a reckless and dangerous politician. He opposed President Trump throughout the duration of his 2016 campaign, using funds from Soros to do so. John McCain is nothing more than a liberal Democrat operating under false pretenses as a Republican.

24 thoughts on “John McCain is Literally The Most Despised Politician”