Kavanaugh seems to be getting a break. A very strange curve has appeared in this ongoing race to ruin Judge Brett Kavanaugh.  Two men have stepped forward to say they may have been the ones who assaulted Christine Blasey Ford – not Brett Kavanaugh.

The Judiciary Committee has quietly questioned these men who say, they, not Supreme Court nominee Brett Kavanaugh, had the contact with Christine Blasey Ford at a 1982 house party that led to sexual assault allegations.

The remarkable news was revealed by Grassley in a late night release reporting of the Committee’s work behind the scenes.

It was in 1982, Dr. Christine Blasey Ford claimed to remember a type of encounter she thinks she had with Judge Brett Kavanaugh.  Her memory is fuzzy due to allegedly having too much to drink.

This in turn brought other women out of their ‘shells’ to release their own accusations.  Basically it turned into a smear campaign.

But Kavanaugh has repeatedly denied all the allegations lodged against him.   Senator Grassley is a fair and honest man, and I know being in the middle of this mess has been difficult for him.

What about these two men?

Kavanaugh and Ford, will face off today, but we don’t know yet if these men are being acknowledged as legitimate.

One of the men was interviewed twice by committee staff. He also submitted two written statements, so they must be taking him seriously.

The second man was interviewed over the phone.  Shockingly he believed he, not Kavanaugh, had the  encounter with Ford.

The committee seems to be taking all claims seriously, as they should. Senator Chuck Grassley is a fine and honorable man, and we are fortunate to have him leading the group.

In this regard, the committee has also questioned Kavanaugh about a series of anonymous allegations, including a physical assault on a woman in the 1990s.

The release also outlines a number of others the committee has interviewed, including friends of Kavanaugh and those who know the women who have lodged accusations against him.

The news comes after reports surfaced late on Wednesday about Julie Swetnick, the woman represented by hyper-partisan lawyer Michael Avenatti, who claims that she witnessed Kavanaugh participate in gang-rapes.

Swetnick sued her previous employer for sexual harassment using a law firm run by Debra Katz, the lawyer for Christine Blasey Ford, one of Kavanaugh’s other accusers.

That is extremely suspicious that these two had used this Debra Katz.  She seeks to destroy Republican men, but she said that Paula Jones did not have a case against Bill Clinton.  It is the Democrats fighting an outright was against the Republicans.

In another report on Swetnick, her ex-boyfriend had filed a restraining order against her and noted that she’s “not credible at all.”

Judiciary is also talking to someone who thinks he forced himself on Dr. Ford not Judge Kavanaugh pic.twitter.com/NJGRyMiW47

-an anonymous claim of rape fwded by Harris’ office
-two intvus & a written statement from a man “who believes he, not” Kav, assaulted Ford in 1982
-phone intvu w/a 2nd man who believes same as above

As the Senate Judiciary Committee prepares to hear testimony from Christine Blasey Ford, the woman who has accused Supreme Court nominee Brett Kavanaugh of sexual assault, here are four key pieces of evidence for the panel to consider:

On Aug. 7, Ford, 51, was given a polygraph exam in which she detailed an incident from the early 1980s in which she claims a “drunken” Kavanaugh, then a 17-year-old student at Georgetown Prep in North Bethesda, Maryland, pinned her to a bed during a house party, groped her, and tried to take off her clothes. At the time, Ford was a 15-year-old student at the all-girl Holton Arms School in Bethesda. 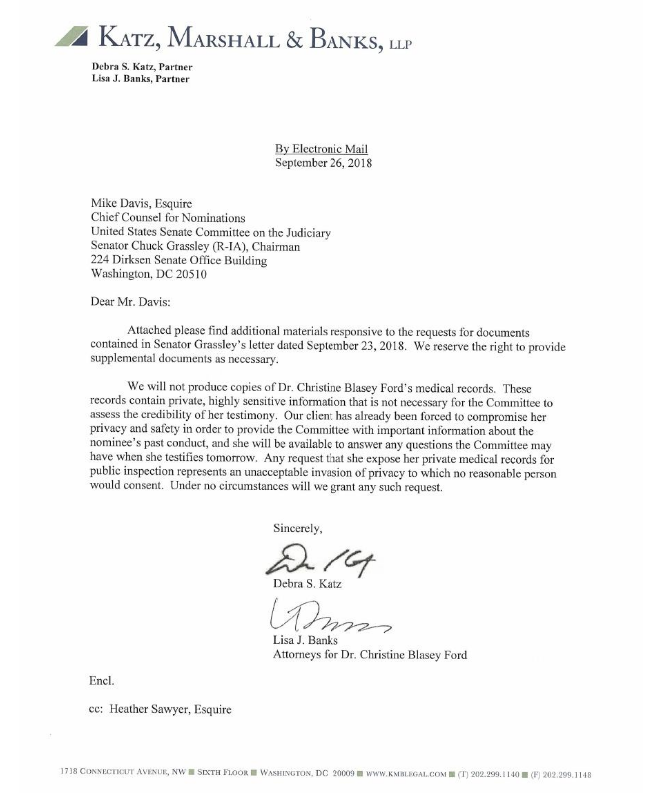 Now when and where can one get news this present day hearing?

The following is a live video of the hearing.

The day’s events will start at 10 a.m. ET. Ford will take the hot seat first, after opening remarks from the committee chairman, Charles Grassley, R-Iowa, and Sen. Dianne Feinstein, D-California, the panel’s top Democrat. The proceedings are expected to last into the afternoon. After the 21-member committee finishes asking their questions of Ford — however long that will be, including breaks — then Kavanaugh will go next.

In her first public statements, Dr. Christine Blasey Ford is answering questions from lawmakers on the Senate Judiciary Committee about her alleged encounter with Judge Brett Kavanaugh when they were both teenagers. She claims he sexually assaulted her at a party during their high school years in the early 1980s.