Latest Covid updates for Europe.
Fake pandemic, fake crisis on deliberately manufactured false numbers.
September and early October increase in positive tests is over.
UK: 13,972 official number of positive tests or one third of Vallance and Whitty’s fraudulent projections from September 23.
Official number of deaths “with” covid remain very low at around one death per day per million people.

An uptick in flu like diseases ALWAYS happens at this time of year.
Spain: Official number of positive tests are rapidly declining.

Number of daily deaths also declining.
France: The rapid rise of official positive PCR tests (most of which are false positives) may now be over.
Previous few days had seen an average of 20,000 per day.
Today they reported only 8,505.
A large part of the recent rise in positive tests in Western Europe is due to the mass testing of asymptomatic students who are not ill, not infectious, and not a danger to anyone.
Boris Johnson in the UK, Macron in France and the Spanish government have recently implemented further insane Covid restrictions on the basis of falsified, fake numbers to try and keep the panic and mass hysteria going.
These restrictions will kill and harm millions more people, while doing absolutely nothing to prevent any Covid deaths, and further destroy their economies – increasing poverty and unemployment. 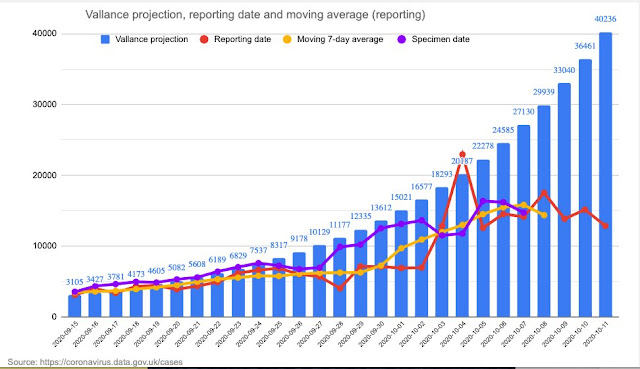 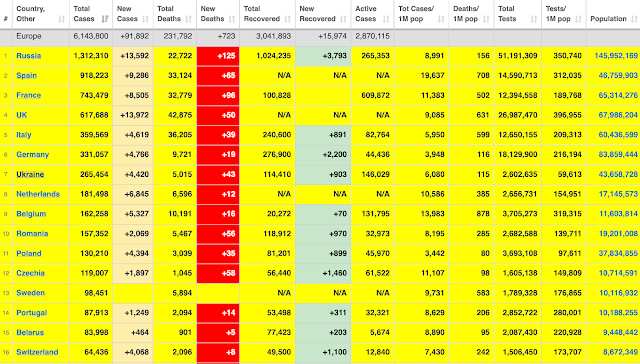 This is from a massive 259,000 PCR tests which are notoriously unreliable.
Most of the UK’s “positive” tests are false positivies from traces of viral fragments from people who were exposed to, and recovered from, the virus weeks ago.
Covid hospital admissions and deaths are still being fraudulently recorded.
A patient admitted to hospital from some other cause (e.g. a heart attack, a stroke, or an accidental injury from falling down stairs) who then subsequently tests positive for Covid at some point after their admission is recorded as a “Covid admission”.
The false reporting is likely to be in the range of 20 to 50%.
Every patient admitted to hospital is being tested for Covid, irrespective of the reason for their admission, and even if they are displaying none of the symptoms for Covid.
Deaths are similarly being fraudulently misreported.
Anyone who tests posiitve for Covid (including the now 90% of false positives) and then dies for whatever reason within the next 28 days is recorded as a “Covid Death”.

So an 88 year old patient in the terminal stages of cancer or has suffered a heart attack and has been assessed as only having a few days, or weeks to live will be recorded as a “Covid Death”.

Spain reports a total of 9,286 positive tests for the last 3 days, or an average of 3,100 a day (it did not report new covid cases or deaths over the weekend).
Spain’s temporary blip is over and the number of positive tests is rapidly declining.
N.B. Spain has not had a new outbreak of Covid, the number of official deaths “with, not “from” Covid are tiny 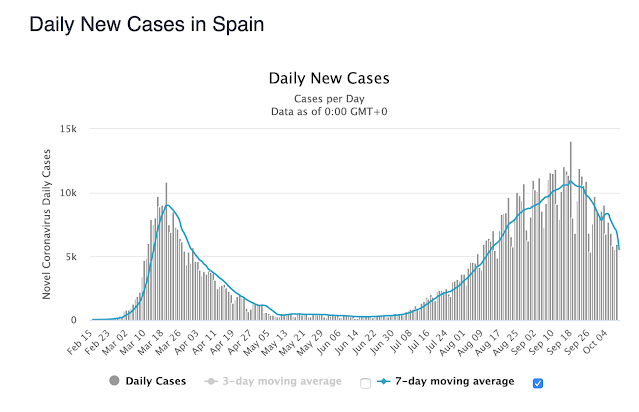 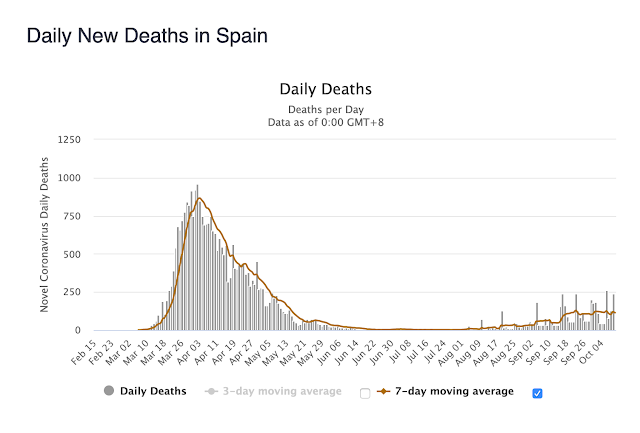 France reports a tiny 8,505 of new positive tests after several days of rising positives averaging over 20,000 a day.
Is France’s fraudulently Casedemic now peaking? It sure looks that way.

France continues to report a tiny official new daily death rate of around one per one million people per day, which in no way constitutes an epidemic or any reason for panic.
The same fraud going on in the UK is being carried out in France with thousands of false positives manufactured every day from running the PCR tests at 40 plus amplification cycles and the mass testing of young asymptomatic people between the ages of 17 and 29 who are not a threat to anyone.
A lot of these are students recently returned to college – the same as the UK. 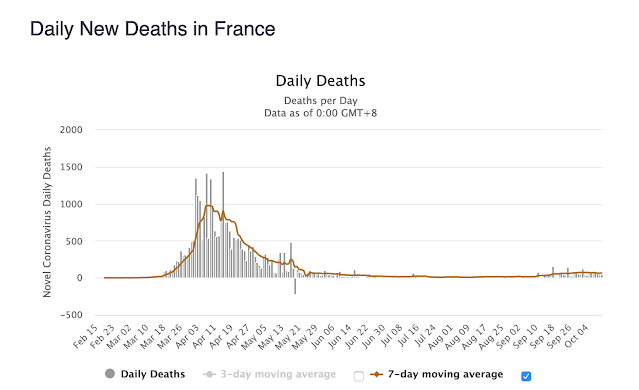 Cases in Russia continue to rise, so does Eastern Europe.
The case fatality rates are low at between 1% and 2.5%. These countries are not owned and controlled by large multinational drug companies like the UK which has a 8% death rate or France with its 5% death rate.
Russia and Eastern Europe were not hit nearly as hard as Western Europe in March, April and May.
They have not yet reached Herd Immunity but will do so over the coming few months.
No reason to panic.
The average age of all fatalities is above life expectancy in all European and Western countries and almost all have pre-existing conditions.You can look up the trends for all these countries here:
www.worldometers.info/coronavirus/
300 views