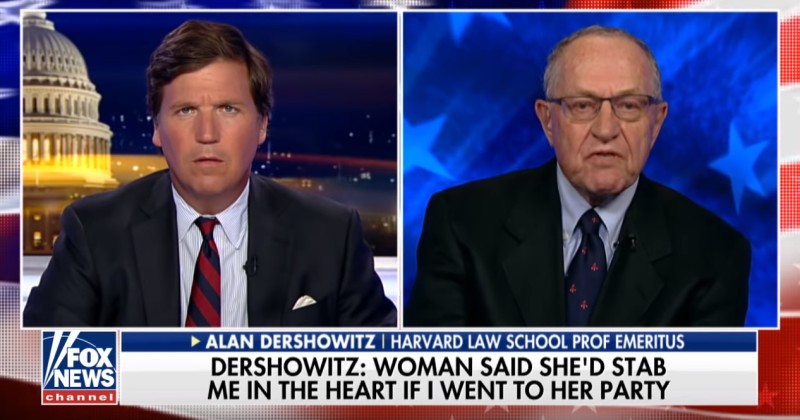 Alan Dershowitz is a well known Harvard Law Professor, and a life-long leftist, or liberal/progressive, to use the parlance of our times. Just a few days ago, he wrote an  op-ed in which he deplored the fact he’s being rejected from his leftist social circuit (read Martha’s Vineyard) due to him defending President Trump’s actions on cable news. Dershowitz ‘s main sin is that he’s completely against the left’s obsession with impeaching the POTUS, and, horribile dictu, he had dinner with Trump earlier this year. During his appearance on Tucker Carlson’s show last night, Alan claimed that a Martha’s Vineyard woman threatened to kill him if he had attended that party.

Alan Dershowitz is very much the last of the Mohicans (with faux apologies to Dizzie Lizzie Pocahontas.) Is there anyone else left in the Democrat Party with an ounce of integrity? Martha’s Vineyard cocktail party, aka “You better agree with me that Donald Trump be impeached or I’ll stab you with my pickle fork. Now pass the caviar dahling and go get me another martini.”

What do you know, ALan Dershowitz, an admitted life-long liberal and Hillary supporter, is shocked now that the side he’s been on all his life is showing its true colors and threatening him? Sorry Alan, but now you understand what happens when you refuse to go-along lock, stock, and barrel, with everything that your now-very-leftist political party insists on for everyone to live under. They are totalitarians, plain and simple.

My main issue  with this guy is that he helped (as a lawyer) convicted pedophile Jeff Epstein get off easy, and also possibly slept with some of the underage girls Jeff had at his residences. Believe me, I’m not spinning anything:  Alan Dershowitz was Jeff Epsteins lawyer, and Virginia Roberts said she was coaxed or forced to sleep with Alan Dershowtiz when she was underage. Epstein should have gotten at least 10 years, but all he got was 1 easy year where he could leave the jail for most of the day and go to work.

This was because of Dershowitz. On the other hand,  even if I don’t agree with everything Dershowitz is or has done, you can obviously see that this man has had a change of heart. Our whole goal in life is to better ourselves each day we are allowed to live. For some of us, it may take a life time. But hopefully, you can say that you are not the same person you were 1, 2 or 5 years ago, right? I am not defending him, nor his past actions, but  it looks like because he is getting ousted by the very people he defended his whole life, he may be looking at his situation differently, now. When a person is abandoned by everyone they think are their friends, life looks very different.

The neo-communist  so-called Democrat party is rapidly getting at a very dangerous stage, as its hysterical rhetoric is starting to produce very real and dangerous physical effects among its supporters; ” We the People” are going to have to take these Marxist revolutionaries head on! Be very thankful that the Founders had the wisdom to include the 2nd Amendment in the Bill of Rights, or these Stalinist wannabes would be running replays of the 1917 Bolshevik revolution. This is the real reason they want guns registered and then, when it’s politically opportune, banned and confiscated.