“INAPPROPRIATE AND WRONG:” CHEROKEE NATION OFFICIAL SLAMS WARREN OVER DNA CLAIMS. “Meanwhile, to drive home the fact that this has backfired spectacularly on her everywhere else, note that she’s already become an Onionpunchline…You’ve gotta f*** up awfully badly as a staunch progressive to get the Onion dunking on you, especially when you’re trying to dunk on Trump yourself.”

Related: Why Elizabeth Warren’s Lies Are Good For America: “So let’s all appreciate Elizabeth Warren’s contribution to the demolition of America’s corrupt affirmative action regime. It is long past time that we stopped classifying each other by race and bestowing benefits on that basis. Warren’s message is liberating: we are pretty much all Indians, or Hispanics, or African-Americans now. So let’s move on.” 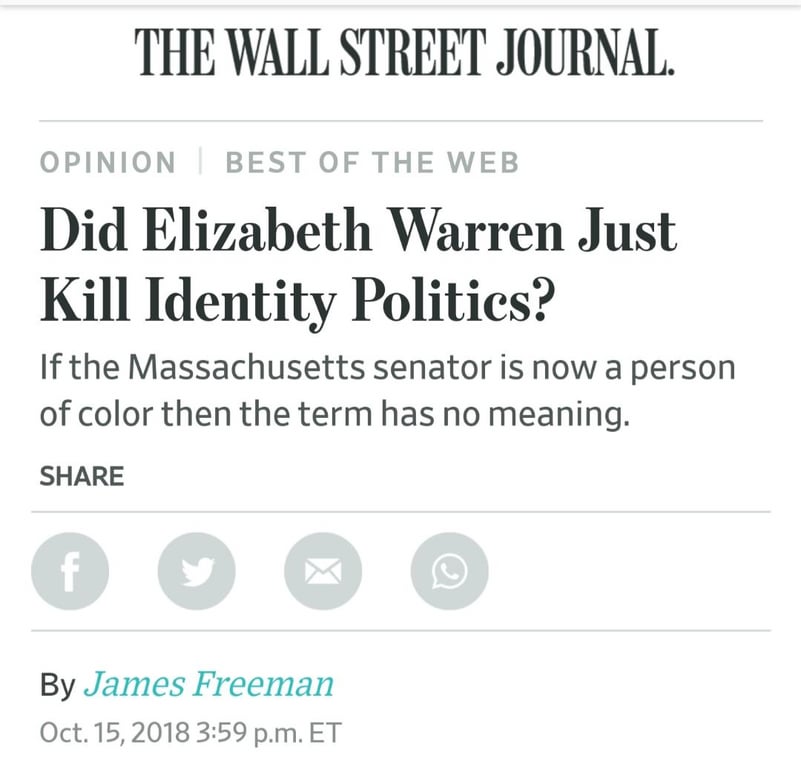 WELL, WE CAN HOPE: Did Elizabeth Warren Just Kill Identity Politics? If the Massachusetts senator is now a person of color then the term has no meaning.

At least according to the report from Professor Bustamante, it’s possible that Sen. Warren has far less than one percent Native American ancestry, and that her genetic makeup is perhaps similar to that of the average white person in the U.S. Could this create a problem for the senator both among those who have never claimed minority status and those who believe they clearly deserve it? . . .

Before facing President Trump in a 2020 debate, Sen. Warren will first need to win over the Democrats who vote in presidential primaries. If these voters accept her as a Native American then logically it suggests that most if not all Americans can also claim to be members of groups that have historically suffered discrimination. We’re all minorities now?

We didn’t wipe out the Indians. There are Indians everywhere, running America and living in it. Basically, the Indians won!

Warren’s decision to launch her campaign on Donald Trump’s terms is not going to discourage him.

And it’s easy to see how Trump will keep weighing in. The most obvious path is simply tweeting — he can live-tweet speeches and debates, comment in the early morning hours on a candidate’s looks or conduct, the usual. The other, which he’s begun to try out, is to try to revive the flagging media interest in court gossip by talking about the Democrats to his sieve-like staff and watching it leak into the press as a catalog of his “views” on the candidates. There even seems to be a race to figure out the nicknames he’ll attach to each, something to which commentators — in this moment of a bipartisan suspicion that the president has magical political abilities — attach totemic power.

Candidates, meanwhile, will not exactly have their feelings hurt by a mean tweet. Anyone who has the misfortune of having her email full of quarterly fundraising requests from Democrats knows there’s no better subject line than “The President Is Attacking Me” to harvest credit card numbers. And in a crowded field, Trump will have the power to elevate his targets.

What’s more, Trump and the reporters covering him will be bound by an eternal truth of presidential campaign coverage: Re-election campaigns are grindingly boring.

That last line is so far removed from reality that I think it must be Smith’s tell that he believes Trump will win in 2020.

See also  Need any more proof America is dumbing down the kids?