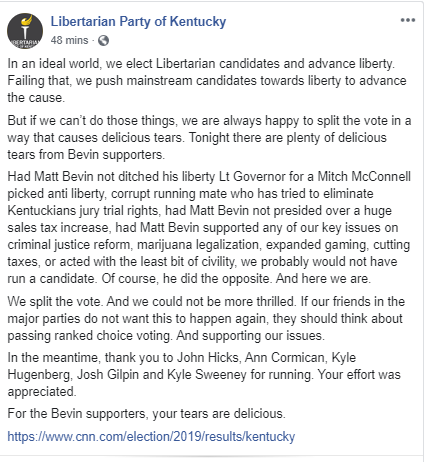 In an ideal world, we elect Libertarian candidates and advance liberty. Failing that, we push mainstream candidates…

Posted by Libertarian Party of Kentucky on Tuesday, November 5, 2019

In an ideal world, we elect Libertarian candidates and
advance liberty. Failing that, we push mainstream
candidates towards liberty to advance the cause.

But if we can’t do those things, we are always happy to
split the vote in a way that causes delicious tears.
Tonight there are plenty of delicious tears from Bevin
supporters.

Had Matt Bevin not ditched his liberty Lt Governor for a
Mitch McConnell picked anti liberty, corrupt running mate
who has tried to eliminate Kentuckians jury trial rights,
had Matt Bevin not presided over a huge sales tax
increase, had Matt Bevin supported any of our key issues
on criminal justice reform, marijuana legalization,
expanded gaming, cutting taxes, or acted with the least
bit of civility, we probably would not have run a
candidate. Of course, he did the opposite. And here we
are.

We split the vote. And we could not be more thrilled. If
our friends in the major parties do not want this to
happen again, they should think about passing ranked
choice voting. And supporting our issues.

In the meantime, thank you to John Hicks, Ann Cormican,
Kyle Hugenberg, Josh Gilpin and Kyle Sweeney for running.
Your effort was appreciated.

For the Bevin supporters, your tears are delicious.

In an ideal world, we elect Libertarian candidates and advance liberty. Failing that, we push mainstream candidates…

Posted by Libertarian Party of Kentucky on Tuesday, November 5, 2019

THERE IS NO WAY IN THE WORLD
THOSE VOTERS WHO VOTED FOR
GOP-Attorney General,
GOP-Agriculture Commissioner,
GOP – Treasurer
DID NOT FOR
THE GOP GOVERNOR !!!!
Bevin, Matthew won be a LANDSLIDE!!

They also tried to STEAL
Secretary of State
but it was too much of a LANDSLIDE to make up.

Kentucky has weak voter id and dirty election rolls. Voter roll clean up of up to 250,000 names underway as required under consent decree obtained by @JudicialWatch – but was delayed by outgoing leftist Secretary of State. t.co/l49kjQszmE