When the duo of Rus Yusupov and Colin Kroll launched the widely viral HQ Trivia live game show in August 2017; they were probably not thinking about kindling the fire of a disruption that might forever change the face of trivia, livestreaming, digital entertainment, and advertising. Over the last 15 months, we have witnessed the arrival of many variations of live trivia game shows targeted at different audiences. One of such later arrivals, That’s Right!, founded by Orkan Arat brings a whole new level of innovative thrill into the way live trivia game shows will be played and entertain hundreds of thousands of players globally. 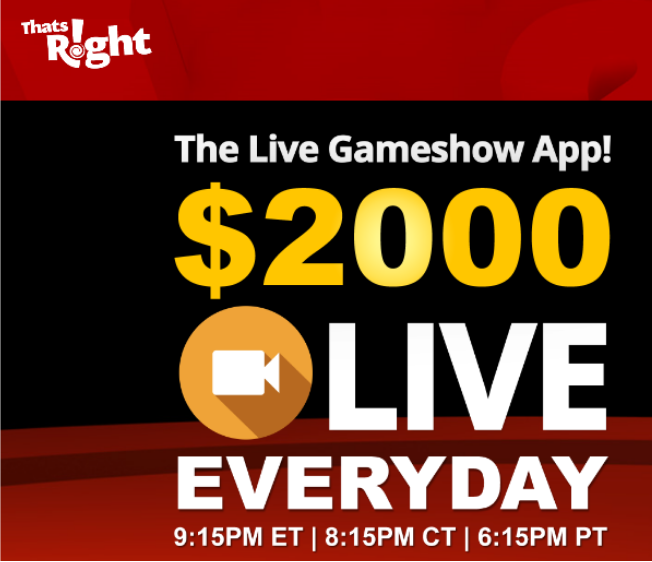 How it all started

That’s Right! is the first live trivia game show combining live trivia streaming with a raffle draw at the end giving players another shot at winning a part of the prize in each game. In the words of Orkan, “The idea sparked from two dreams we had as gameplayers ourselves. We wanted to play a quiz game where the winners split a prize, but we also wanted every player to survive all the way to the end and have a chance to win even more. Who doesn’t love a chance to win cash, right?”

Orkan who has more than 10 years of experience in the lead generation business understands the social side of business and knows how to create a unique value proposition to make a difference. Having helped companies like Allstate, DirecTV and ADT. Plondo Network, also founded by Orkan, generates over 1 million calls per year for its clients and with a year-to-year growth rate of at least 25 percent, he believes that That’s Right! has the potential to carve out a niche in the fast-growing live trivia game show segment.

Contrary to all other game shows that follow in HQ Trivia’s step to only share the prize money between players who answer all the questions correctly, That’s Right provides players two opportunities to win money.

The first way to win is when all players who answer every question right, they split a prize in line with the typical model of rewarding the smartest players. The second way to win is when a new prize is awarded to one of the players by drawing a winning number from a ball machine. All the players get a raffle ticket at the start of the game and getting the trivia answers right in turn earns additional tickets which increase chances of winning the raffle. On incredibly rare occasions, someone can be both the smartest and the luckiest in the game when the quiz winner happens to also be the winner of the raffle prize.

The investment landscape in live game shows is showing promise

Moving forward, there will be much more interest in the live trivia segment as streaming speeds improve and more people participate in live trivia sessions using their mobile devices.

The market penetration of the live trivia gameshow market could be compared to the way TV gameshows became popular in the second half of the 20th century. With the current smartphone world-wide penetration rate, the potential is endless. We have seen some early examples in Asia of live trivia shows growing to 1 million downloads in a short time with zero advertising needed to capture players. The interactivity of live streaming increases the engagement of the users and hence the appeal of the concept to investors and brands.

That’s Right! plan to monetize their platform through brand sponsorships. The team believes that the high level of player engagement and the nature of a live gameshow, provide an incredible opportunity to serve bitesize ads on smartphones instead of the regular full-feature ads used on TV.

Advice on investing in tech startups

Investing in early stage innovative tech startups has consistently proven to be one of the smartest decisions an investor can make. The early investors in Amazon, Google, Facebook, and Microsoft among others are the same people running million-dollar VC funds today.

If you are just starting out as an investor in early-stage tech companies, the main aspect to consider is the team. Have the team members demonstrated a track record of success? Do they seem to believe in the concept? Have they had any traction? The quality of the team above every other factor often determines how well the startup will be able to execute its ideas and deliver the kind of ROI that will be worth your while.