Tax policy experts usually think about sales tax in one of two ways. On the one hand, it is aregressive tax because it takes a greater percentage of income from poor and middle-class people than the wealthy. But on the other hand, sales tax proponents like to point out it’s a tax on consumption, and the amounts people pay depends on how much stuff they buy. The situation is made even more complicated by the fact that local municipalities and county governments often pass their own sales tax measures. This made us wonder if there was a way to visualize the current sales tax situation across the entire country. 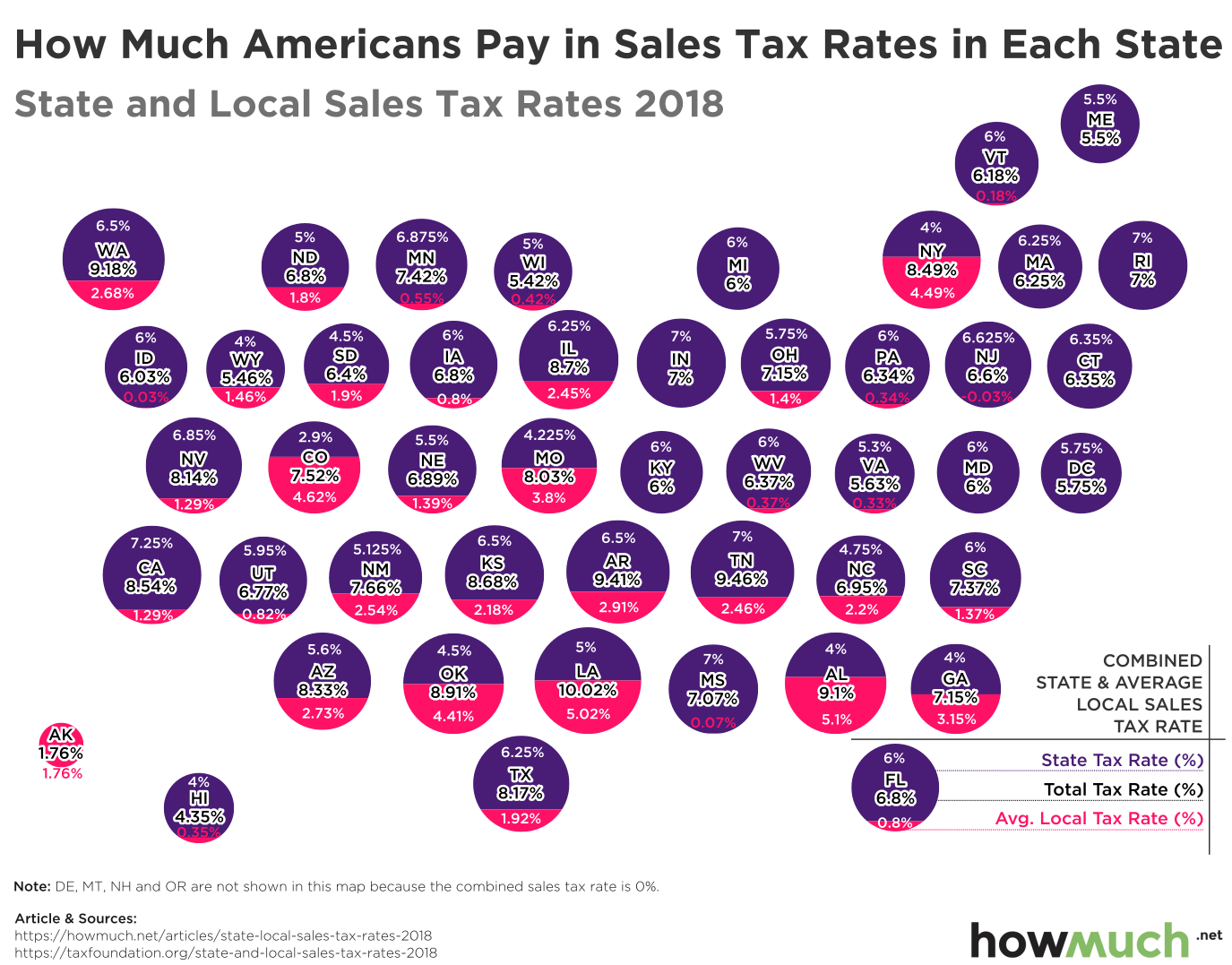 We found our numbers from the Tax Foundation, a public policy organization advocating for a simplified tax code. They gathered statewide sales tax data and combined it with a calculation for the average local sales tax rate, weighting city and county rates by population. We represented each state’s sales tax burden by creating a circle—the larger the circle, the greater the burden. We then split the circle in two to visualize which portion comes from statewide mandates verses local ordinances. This approach creates an apples-to-apples comparison for sales tax levies across the country.

You might notice that there are a few states missing from our visualization: Oregon, New Hampshire, Montana and Delaware. That’s because none of these places have any sales taxes at either the state or local levels. Alaska deserves special mention because although it does not have a statewide sales tax, there is an average 1.76% local tax rate. And the lowest statewide rate (other than 0%) belongs to Colorado at 2.9%, followed by a number of states at 4% including Hawaii, Wyoming, Georgia, New York and Alabama.

Analyzing the entire sales tax burden complicates our political narrative that conservative places tend to tax people less. Our map contains large circles for states across the South, led most notably by Louisiana with an incredible combined sales tax rate of over 10%. Many of these places have relatively low statewide levels, like Alabama (4%) or Oklahoma (4.5%). Tennessee is exceptional thanks to its statewide rate of 7%, but keep in mind they don’t tax earned income whatsoever.

The opposite is also true for more liberal states like Illinois, California and Washington. These places have comparatively onerous statewide tax burdens, led by California at 7.25%. But on the flip side, cities and counties maintain very low local sales taxes. One exception is New York, where a local ordinance of 4.49% from New York City pushes the Garden State to 8.49% overall.

So where is the best place to live where you can keep most of your money? Should you just move to a state with no sales tax whatsoever? Remember that there are two sides to the taxation question—the government can tax money as you earn it and as you spend it. And looking at simple statewide sales tax rates doesn’t paint a full picture either. It is only by considering the combination of statewide and local tax rates that you can see the true sales tax burden.