Futures down -700 pts on news of “South African” Corona Variant

.. now on pace for the 5th straight weekly loss for the first time since Mar 27, 2020. #OOTT pic.twitter.com/HN8PunkJiQ

Futures are sliding on Thursday night when, with most US traders snoring in a tryptophan coma, the world is suddenly freaking out, and algos are hitting bids, amid fears that a new coronavirus strain detected in South Africa, known as B.1.1529, reportedly carries an “extremely high number” of mutations and is “clearly very different” from previous incarnations, which may drive further waves of disease by evading the body’s defenses South African scientists said.

Translation: a new wave of restrictions, more lockdowns, and – eventually – trillions in new stimmies are coming… an outcome so “unexpected”, we rhetorically asked if this was the endgame just one week ago.

Is this next lockdown going to result in more stimmies?

According to the Guardian, only 10 cases in three countries have been confirmed by genomic sequencing (and up to 100 suspected), but that is more than enough for the Pharma-Government complex to set the wheels of widespread social panic and future lockdowns in motion and, according to the liberal outlet, “the variant has sparked serious concern among some researchers because a number of the mutations may help the virus evade immunity.” Which of course is a polite way for Bill Gates to suggest you panic.

According to reports, the new B.1.1.529 variant has 32 mutations in the spike protein, the part of the virus that most vaccines use to prime the immune system against Covid. Mutations in the spike protein make it harder for immune cells to attack the pathogen, just as so many vaccine skeptics have been warning for the past year when making the point that taking inefficient medications shoved down the population’s throats (such as those from Pfizer and Moderna) that do not serve as real vaccines but merely paliatives, will only lead to more dangerous and weaponized versions of the virus.

See also  Are Stocks Entering a New Bear Market?
See also  Is the $USD Warning That Inflation is About to Become BAD News For Stocks?

The variant, called B.1.1.529, has been detected in South Africa in small numbers.

South African scientists have detected 30 mutations to the spike protein, the part of the virus that binds to cells in the body, which could have implications for vaccine efficacy and transmissibility. 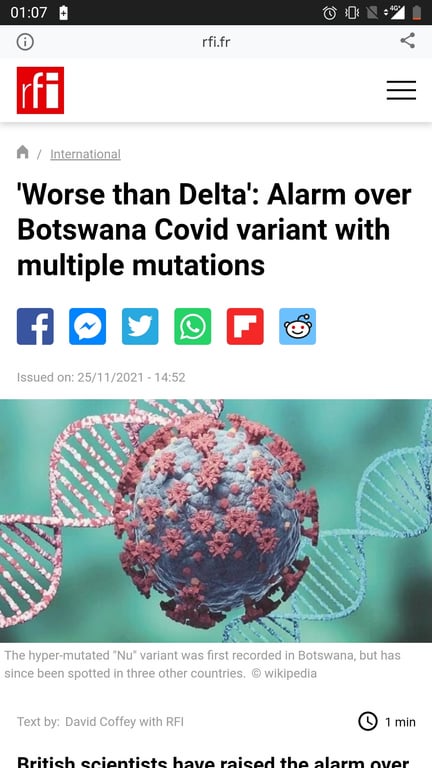