The US and China are the world’s largest and second-largest economies.

They are also entwined in so many ways that it’s hard to tell where one ends and the other starts. Some call it “Chimerica.” which is an apt description.

But that’s not bad.

International trade promotes peace and prosperity for all. It’s not always smooth, evenly distributed, or free of issues. But such is the nature of great affairs.

In the long run, China’s growth has made the world better. Billions, and I mean literally billions, of people globally have been lifted out of poverty.

All that said, the US and China are also separate nations with separate interests. We compete as well as cooperate. So, conflicts inevitably arise.

They need to be resolved, but not in the way Trump has proposed.

He fails to grasp one thing. Impairing an economy so tied to our own weakens the US as well.

China Is on Shaky Ground

But China can’t just flip a switch. Entire regions and industries are optimized for a model we want to change.

However necessary, the change will take time. It will cause problems if it’s not managed well.

Its unique blend of communism, capitalism, and sheer size, has produced enviable growth. I think growth will keep up, but a slowdown is inevitable.

China is still subject to the law of large numbers. It can’t maintain 6% or higher GDP growth indefinitely.

We’ve seen hints in data for some time now. And they’re starting to add up.

For one, the gap between US and China GDP growth has been shrinking in the last decade. 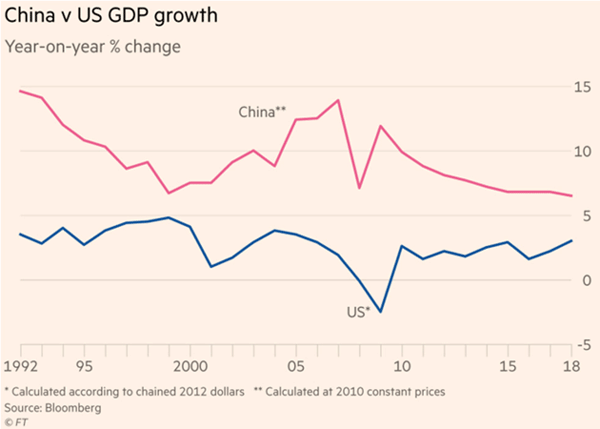 Then automotive sales are rolling over.

That’s partly due to the rise of ride-sharing services. But it also suggests the growth of Chinese middle-class prosperity has slowed.

This Isn’t Just a Chinese Problem

US and European automakers export vehicles to China and own factories in China.

Then you probably heard Apple’s revenue warning. It blamed weakening conditions in China.

A great deal of world growth is directly tied to Chinese growth. And not just absolute current growth, but expected future growth.

Businesses have built 6% Chinese growth into their models. And compounded forever. It’s baked into the forecasts and expectations. Shareholders are happy.

And when that growth stutters, we get surprises. Apple is just the first of many.

See also  Joe sends more money to China. And use their technology for surveillance. What could go wrong?

The US Is More Dependent on China Than You think

Yes, the US has a trade deficit with China.

But that doesn’t mean China buys nothing from us. They indeed do. And part of our economy depends heavily on Chinese customers.

Here’s a chart that shows China’s importance to top US semiconductor companies:

Five major public companies got a third or more of their 2017 sales from China. A little change could wipe out all or most of their profits.

Lots of smaller US companies also count on China for components that have no US alternatives. Rising costs, whether due to tariffs or anything else, hit their bottom lines, too.

US Growth That Wasn’t

A significant part of US growth last year came from a rise in US inventories. For some arcane reason, building inventories, not actual sales, counts for GDP.

Many businesses that depend on Chinese materials built inventory ahead of the feared tariff at the end of 2018.

Those inventories are going to be sold in 2019 and often not replaced. So, a large part of the slowing economy in 2019 will simply be a reduction of inventories.

The apparent robust growth of the last half of 2018 was simply pulling production forward from 2019.

China has its own problems, like enormous debt and increasingly strapped consumers. But remember, a weak China is going to hurt the US. As well as Europe and especially Germany.