“We knew ‘free money would inevitably end. Affordability would become an issue…’

The double whammy are rising costs for highly leveraged companies, such as auto dealers, and consumers facing rising prices of vehicles to be financed at higher rates. Something has to give.

…. As is industry norm, the dealer makes more money in F&I off each vehicle than by actually selling the vehicle.”

“Banks have spent much of the past 10 years chasing ultra-creditworthy borrowers. Yet that slice of the market, which has grown as the economy has improved, is largely tapped out.”

Our current economic growth has been built on a mountain of debt. It is unsustainable. 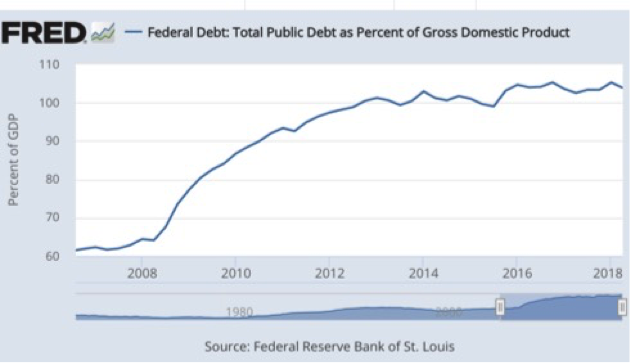 Our debt has increased from around 60% of Gross Domestic Product to over 100% in the last decade. The boom is financed by consumers up to their eyeballs in debt. 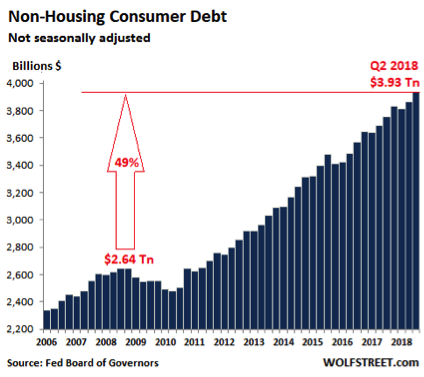 “…. Consumer debt is up 49% from the prior peak at the cusp of the Financial Crisis…thus continuing the time-honored trend of debt rising faster than nominal GDP.”

What happens when the music stops, and the loans can’t be repaid?

My son Dean was at the Naval Academy and wanted to buy a car. He found his dream and got the “best price” from the dealer.

Our banker looked over the paperwork and said he wouldn’t make the loan. The payments were too high for his income, and the real value of the car was lower than the dealer’s price.

When we left, I explained the bank did him a favor by not lending him money, he can’t afford the payments. He also provided a clue – the dealer is charging too much. He should be negotiating with the dealer, not overpaying for a car.

The salesman was grinning as we walked in, anticipating a sale. Dean handled the situation. He calmly said he couldn’t afford the payments and the car was overpriced. They must cut the price, or he would shop elsewhere.

The salesman offered financing. He said, “No, the bank told me what I can afford.” They made a substantial price concession and he bought his first car. I was proud when he said, “Thanks for the great lesson Dad.”

The aforementioned WSJ article is titled “Why Your FICO Score Could Get a Boost in 2019”.

“Credit scores for decades have been based mostly on borrowers’ payment histories. That is about to change.

…. The UltraFICO Score…isn’t meant to weed out applicants. Rather, it is designed to boost the number of approvals for credit cards, personal loans and other debt by taking into account a borrower’s history of cash transactions….

READ  End Of The Road: How Money Became Worthless.

…. The new score…is FICO’s latest answer to lenders who after years of mostly cautious lending are seeking ways to boost loan approvals.” (Emphasis mine)

Nerdwallet fills in some details:

“Credit newbies are more likely to see a significant benefit, assuming they have not had a negative account balance in the past three months and maintain a decent savings balance. (meaning $400 or more.)”

“Applicants will be able to choose which accounts they want considered when the score is recalculated.”

Banks want to boost loan approvals as there are not enough people with good credit. FICO scores can improve as much as 20 points if you have a $400 savings account and have not overdrawn your checking account in the last 90 days? Gimme a break!

What happened to giving honest feedback to a potential borrower?

Good friend and mentor Al (fictitious name) was a big-boy banker; involved in all aspects of banking. Many sought his advice until he recently passed away.

His back-porch lessons explaining what really happened with the Fed’s bank bailouts were priceless.

Al said bank examiners really scrutinize the smaller banks. They regularly audit them, ensuring they have a solid loan portfolio and will remain solvent. Banks want to keep the auditors happy.

When smart bankers lend money, they look at the loan in terms of how a bank auditor would grade the loan. They keep the prime loans and sell the rest to get them off their books. (Note the significant reduction of small banks since 2014)

Who buys them? Most are bought by investment firms, packaged together and resold to retail investors as loan portfolios. They package a bunch of risky loans with just enough better ones to get a good rating from the rating agencies.

There are countless articles, like the NYT, “Ratings Agencies Still Coming Up Short, Years After Crisis”:

“The mistakes that led to the 2008 mortgage crisis can’t happen again, right?

Not so fast, particularly if you’re talking about credit ratings agencies like Moody’s Investors Service and Standard & Poor’s. Eight years after these companies were found to have put profits ahead of principle when they assigned high grades to low-quality debt securities, some of the same dubious practices continue to infect their operations. (Emphasis mine)

…. There’s an entertaining – and illuminating – scene in the movie “The Big Short” that perfectly captures the pathology. As a Standard & Poor’s employee played by Melissa Leo replies when asked why the ratings agency didn’t insist on higher standards: ‘They’ll just go to Moody’s’.”

“The Big Short” is about how one Wall Street Guru, Michael Burry, reviewed thousands of individual loans, concluding the loan packages were full of bad loans, the market was corrupt, and many would default. They bet against the US mortgage market and made billions when the collapse finally came.

The Hutchins Center tells us about last time:

“…. In QE1, the Fed purchased a total of $1.25 trillion in mortgage bonds, $200 billion of debt issued by government-sponsored mortgage companies Fannie Mae and Freddie Mac…. The third and final round…(included) an open-ended commitment to buy another $40 billion per month of mortgage bonds until the economy recovered.”

When the music stopped the taxpayers got stuck with the bad loans.

What about the retail investor?
Subscriber Carl S. voiced a major concern of many readers with his question in the comments section of our recent article, “Is The Fed Engineering A Market Crash?”:

“You talk about stocks, but how would a recession affect holding corporate bonds (the good stuff, not junk), much of which is top tier financial institutions?”

Here are some considerations

Be careful relying on FICO scores and agency ratings. Be like Mike (Michael Burry), do your homework. When the music stops, we should be as far away from risky debt as possible.

When the crash does arrive, there will be plenty of terrific investments on sale at bargain basement prices.