I am back from my 14th annual Maine fishing camp.

The private event at Leen’s Lodge is generally called Camp Kotok in honor of David Kotok of Cumberland Advisors who started these outings many years ago.

CNBC and others began calling it the “Shadow Fed,” but it is really just a meeting of wickedly smart people focused on economics and markets. (I am allowed to attend for comic relief.)

We discussed the world’s problems and the general mood was that many of those problems are beginning to catch up.

Among other topics, there was an open “debate” about Modern Monetary Theory (MMT) and US fiscal strategy.

There was the usual pushback, but I have to admit that I was struck by the private conversations after the debate.

Many smart, well-informed thinkers agreed MMT may be actually attempted in the next decade.

If we attempt MMT, it will end the US dollar’s reserve currency status and produce out-of-control inflation. That will essentially destroy the Boomer generation’s ability to retire with anything like most envision today.

I can’t say it any stronger. If I really see MMT coming, I will reposition my portfolio to heavily weight gold, real estate, and a few biotech companies. I simply can’t imagine a more dire economic scenario.

Many participants had read my analysis of the potential for $45 trillion worth of US debt by the end of the 2020s.

When I started talking about the potential for $20 trillion of additional quantitative easing, it was clear the question made some uncomfortable.

There was general agreement that neither political party can balance the budget. The latest “deal” between Trump and Congress raised spending $320 billion over the next two years.

The previous “sequester” deal that at least tried to limit spending is out the window. With it will go any control on the spending process. Current deficit projections will seem mild compared to what we actually get.

As I said a few weeks ago, using CBO projections from earlier this year and assuming one recession, the national debt would rise to almost $45 trillion by the end of the 2020s.

This new deal will add at least another $1.5 to $2 trillion to that amount. If there is a second recession, we would be looking at north of $50 trillion.

We don’t have $40 trillion, let alone $50 trillion, to put into federal debt. It would crowd out all funding for productive private enterprises and sharply reduce GDP growth. Which is why I expect to see massive, currently inconceivable amounts of quantitative easing.

Doom and gloom? Not really. The math is from the Congressional Budget Office.

Below are the charts that I’ve printed in part four of the discussion with Ray Dalioa few weeks back, assuming recession in either 2020 or 2022. You can see what happens to the deficits and revenues.

Then by the end of the 2020s, mandatory spending will again rise to consume all tax revenue. And again, these don’t include significant off-budget spending. 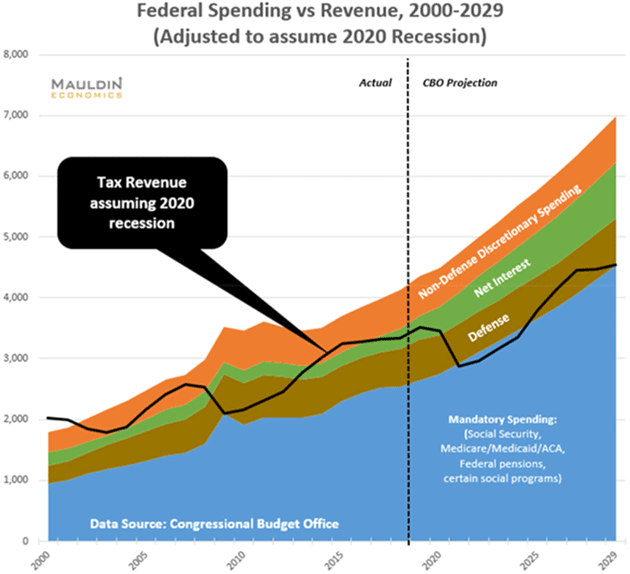 This next graph assumes recession in 2022 instead of 2020. The pattern is basically the same, except that the $2-trillion deficits don’t begin until 2023. Again, this uses actual CBO projections and adjusts revenues by the same percentage they fell in 2008–2009, and recovered thereafter. 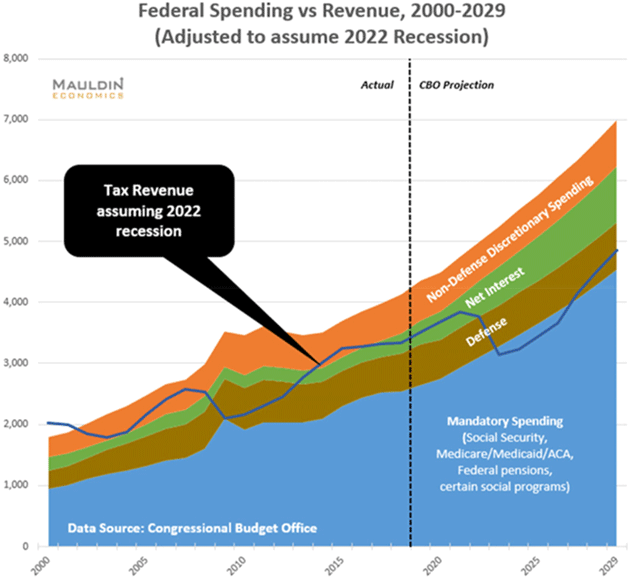 I asked one person after another what they thought would happen. How can we avoid this? I got no good answers. Others were clearly just as frustrated as I am. Let me tell you, I am way past frustration. I am seriously worried for the future of the Republic and our children and retirees.

I asked at least a dozen attendees (and maybe more) this question: If we introduce MMT and the result is what we all think it will be, I think there is a 50–50 chance some states will want to secede from the union. Do you agree or disagree?

I got literally no pushback on that admittedly outrageous idea. When you undertake policies that will destroy the very fabric of society in the name of “justice and equality for all,” those damaged in the process will push back.