March 7 By Jim Stone.
MONDAY THE 7th: SPUTNIK, TASS AND MORE: UKRANIAN MILITANTS JUST GOT BUSTED PLOTTING TO BLOW UP A NUCLEAR REACTOR SO NATO COULD GO IN
NUCLEAR FALSE FLAG PREVENTED. They wanted to say a Russian cruise missile did it
This is confirme 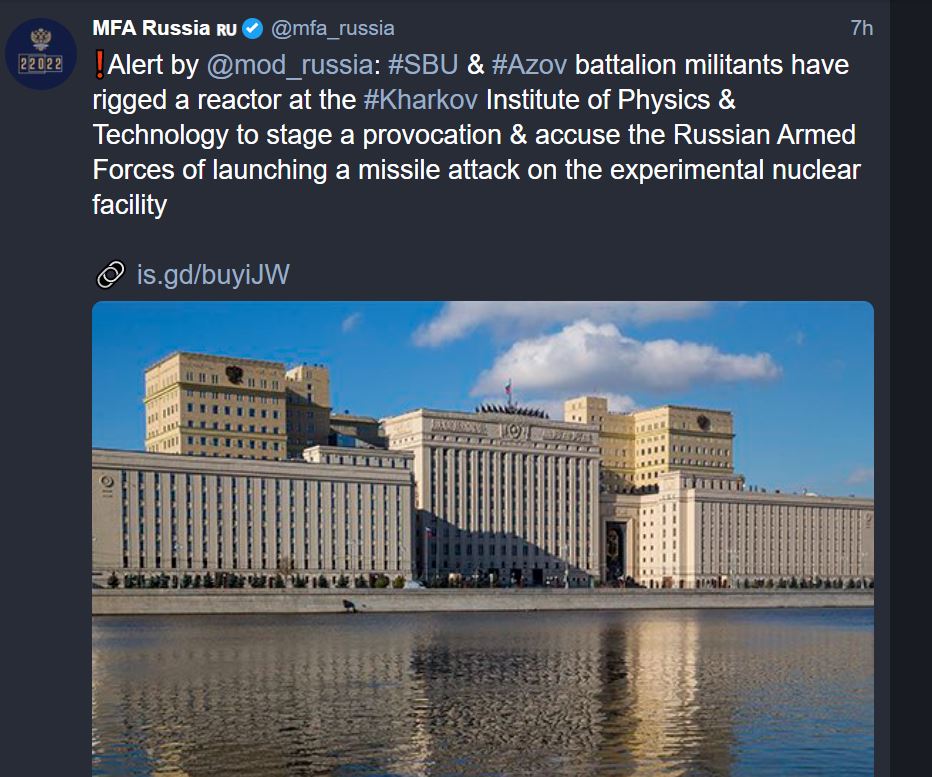 Ukraine’s domestic security service, the SBU, allegedly conspired with Azov Battalion fighters to stage a false flag attack in Kharkov, the Ministry of Defense in Moscow claimed on Sunday night. According to the ministry, the ultranationalist militants allegedly rigged a small experimental nuclear reactor at the Institute of Physics and Technology (KIPT) with explosives.

“The SBU and the militants of the Azov Battalion are planning to blow up the reactor and accuse the Russian Armed Forces of allegedly launching a missile attack on the experimental nuclear facility,” the ministry said in a statement, warning of the risk of radioactive contamination of the area should such a false flag incident take place.

Earlier on Sunday, Ukraine’s Internal Affairs Ministry already accused Russian forces of shelling the city, claiming that at least one projectile hit the KIPT, which hosts an experimental neutron source reactor with “37 nuclear fuel elements loaded into its active zone.” In its Facebook post, the security service also shared several videos of what it claimed to be Grad multiple rocket launcher shells hitting the perimeter and damaging the side of the building.

There were no reports of any radioactive contamination or leaks from the alleged incident in Kharkov, but Ukraine’s deputy foreign minister, Emine Dzheppar, tweeted that “the destruction of nuclear materials installations and reserves could lead to a major technological and ecological disaster,” and accused Russia of “war crimes.”

See also  OLD AND BUSTED: “I disagree with what you say, but I will defend to the death your right to say it.”