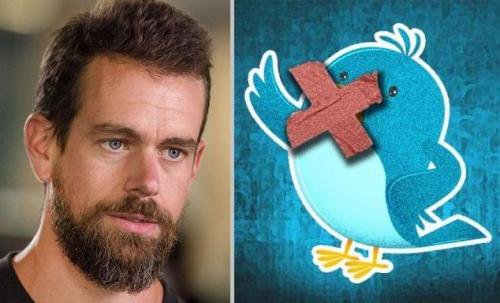 So Twitter Thought Police totally unjustly banned me again for 12 hours.
Presumably after being reported by an EU or Guy Verhofstadt supporter.

They claimed a tweet was “hateful conduct”.
But I didn’t break any of twitter’s rules or “promote any violence” (I’m anti war), nor did I “threaten or harass any other people”, as they claim. 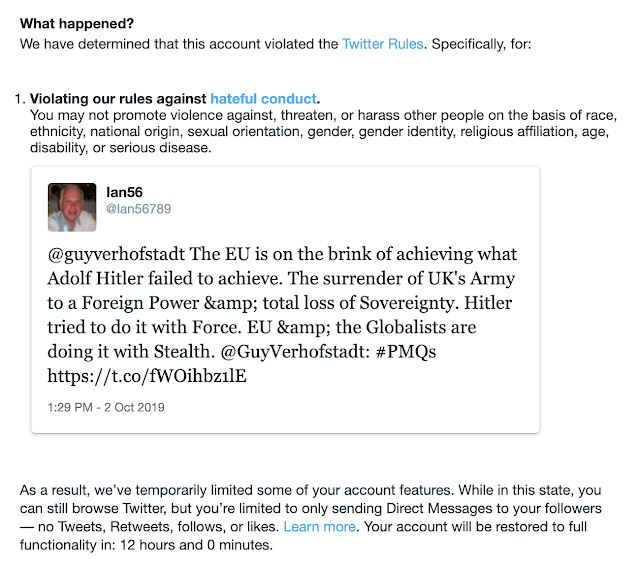 How exactly is that tweet hateful conduct?
Who am I supposed to be harassing or threatening?
The EU is setting up the “European Defence Union”, aka the “European Army”, the purpose of which is to oppress Europeans.
The “European Defence Union” subordinates each member state’s military and intelligence resources to the Diktats of unelected bureaucrats in Brussels.
If you do not control your own military, you have no Sovereignty.
Theresa May committed Treason by signing the UK up to it in 2018, whether or not the UK leaves the EU.
The tweet was fair comment.
This is the video clip, included in the above, now censored, tweet comparing Guy Verhofstadt’s speech on the new “European Empire” at the recent Lib Dem Party Conference, with a speech by Hitler from the 1930’s/1940’s.
N.B. this video clip has been shared widely on twitter with hundreds of thousands of views, across numerous different tweets and several different people.
I didn’t create it, but have been singled out for attack.
Why was that?
There is no “appeals process” for this type of unjustified suspension.
The “process” is a blackmail operation.
You either delete the tweet they don’t like or be indefinitely suspended pending review.
In 1 out of 100 cases twitter might reverse the decision made by one of their censors. 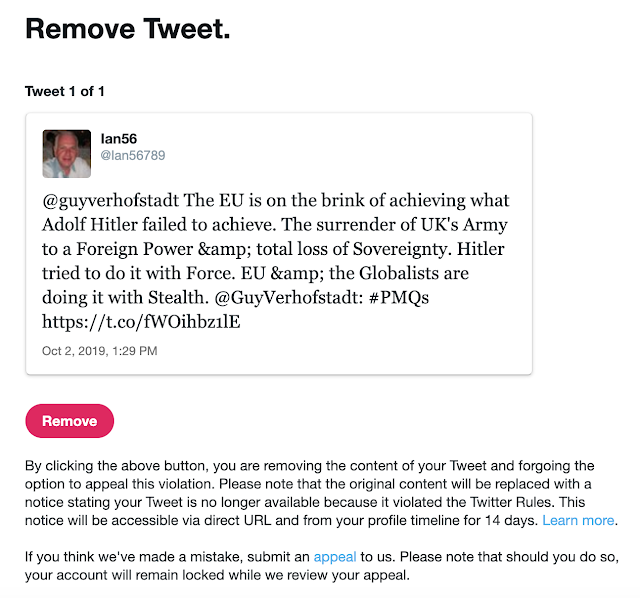 The “offending” tweet was part of a longer thread, warning about the plans for the “European Defence Union” aka the “European Army”.Removing a tweet in the middle of a thread, breaks the thread up, so people cannot see the rest of thread
twitter.com/Ian56789/status/1179370587099205633

If you click on the tweet before the removed one, you can see the rest of the thread.
The reporting & censorship of the removed tweet seems quite arbitrary.Other tweets in the thread are just as forceful & none of them break any of twitter’s rules.
twitter.com/Ian56789/status/1179371891326427137

The insidious, malevolent nature of this arbitrary censorship process is apparent, as twitter specifically states: “repeated violations may result in a permanent ban”.In something akin to the “3 Strikes Law”, even though none of your previous “offences” may be valid. 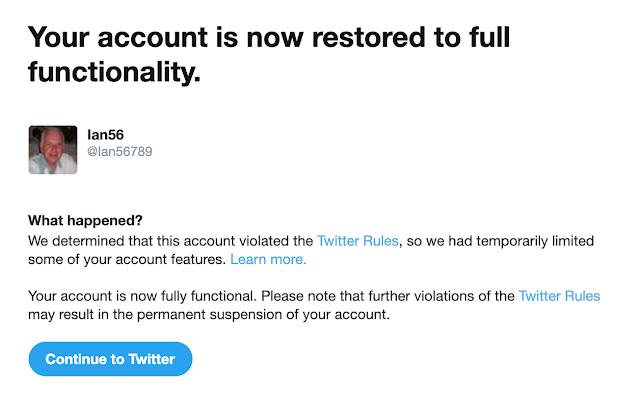 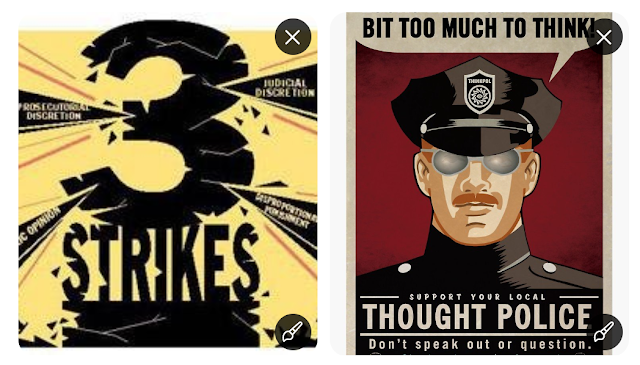 Anyone who has ever told any truth on twitter, knows that Twitter encourages a “Climate of Fear”.
Twitter & the numerous Establishment trolls are looking for any pretext to ban people they don’t like.
While people with “correct opinions” (i.e. people who support the Neocon Wars, Neoliberal Globalism, the EU etc.) can do pretty much anything they like, without penalty or fear of getting banned (including threatening other people with violence). 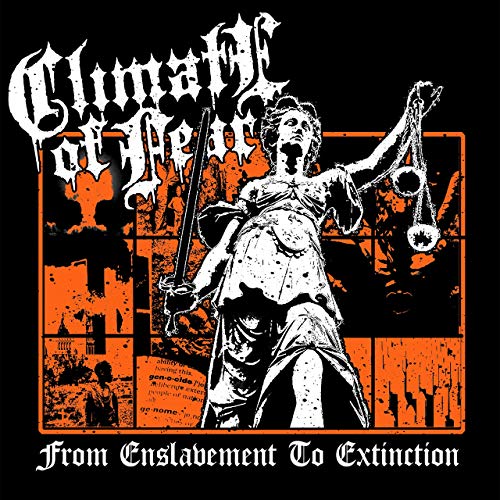 The Climate of Fear is so great, that I don’t even feel able to objectively discuss whether Twitter censoring this latest tweet was justifiable with other people on twitter, because the risk of getting a permanent ban is too great.
The whole purpose of Twitter’s Censorship Regime is to shut down objective debate and information exchange by people who disagree with Establishment approved opinions or narratives. 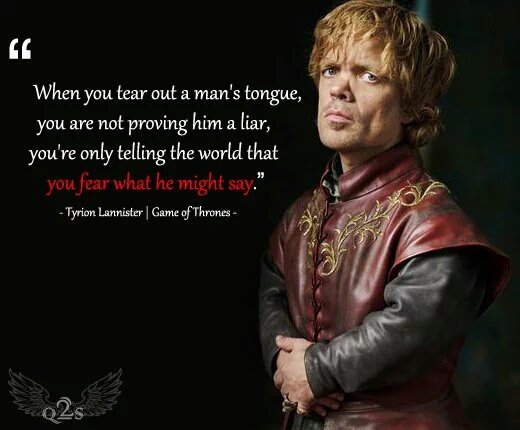 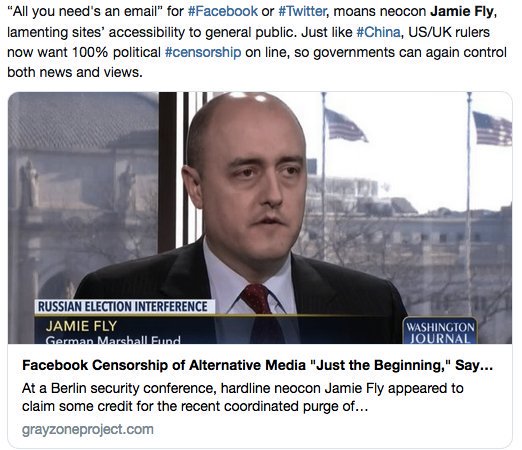 Jamie Fly & Bill Kristol were instrumental in manufacturing the whole “Russian Bot” hoax, with their “Hamilton 68”, run out of the U.S. gov funded German Marshall Fund.
Which was how the Neocons / Neoliberals got this whole Mass Censorship thing going (along with the Russiagate, “Russian Meddling” and Trump/Russia collusion hoaxes).Glenn Greenwald on the collusion of the Neoliberals with the most extreme and discredited Neocons, and the disinfo propaganda they are now producing
theintercept.com/2017/07/17/with-new-d-c-policy-group-dems-continue-to-rehabilitate-and-unify-with-bush-era-neocons/ 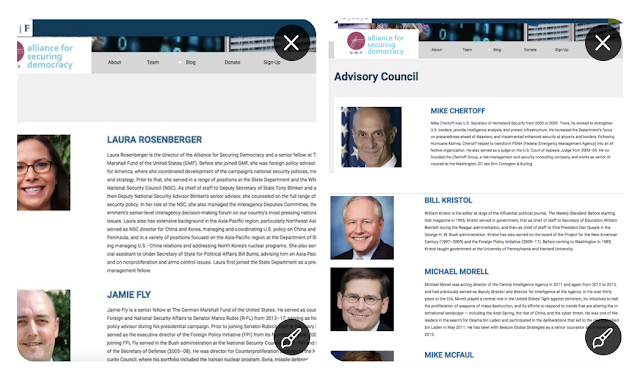