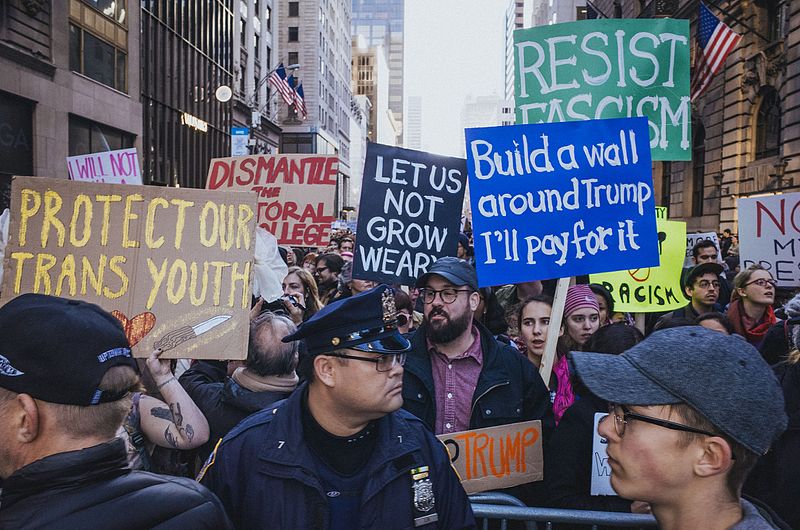 Here’s another angle of a story that’s slowly becoming more outlandish and bizarre by the day, and I am referring to the Democrat lapdog left wing establishment media’s talking point, which has been beaten to death over the last year: Trump colluded with Russia, even if one year into Mueller’s probe there’s not a scintilla of evidence in this regard. Well, according to the indictments issued by Robert Mueller via the last batch of the 13 Russian nationals and 3 Russian “entities” (media companies) that is,  the claim is that there was a factory of basically internet trolls who allegedly spent 2 million bucks (a drop in the bucket compared to what both Hillary and Trump campaign spent) to allegedly meddle in our elections. Mueller in particular in his indictment stated that the goals of those pesky Russians were to sow distrust and discord against the American political system.

In other words, to make Americans to view their leaders as illegitimate, as this would create chaos, division, and a civil war like atmosphere in America. This was the main goal of the Russian disinformation campaign, again, according to Mueller’s own words: to destabilize the US. He further had to admit that Russians were bankrolling not only pro Trump rallies, but also anti Trump rallies. This fact already blows the whole Trump-Russia collusion narrative to smithereens, but let that go, as it’s now clear the Russians played both sides. We also learned that almost nobody participated in Russian-organized/sponsored rallies, as they had little to no attendance, but listen to this: there was one rally that actually did get a lot of attendance and attention, but, oh, the irony, it was an anti Trump rally, which took place after the Donald won the election.

Nobody knew at the time who the real sponsor/organizer of the (New York) rally was. However, never Trumpers congregated to talk about the end of the world, the end of American democracy and the rise of fascism in America. Many of the rallies atendants explained how Trump is going to allow black people to be massacred in the streets, that people will be shot indiscriminately by Trump’s military junta and all that leftist nonsense. The organizers  of that rally, as we learned from Robert Mueller’s indictment, were those pesky Russian trolls, and take a load of this: Michael Moore, that overweight left-wing movie producer, attended the rally himself. By the way, this was the only rally organized by Russians that brought together a lot of people. The rally took place on a Saturday, November 12th, and from 12 p.m to 5 p.m. CNN and MSNBC gave it non stop coverage on their networks.

They not only covered it, but they interviewed the protesters, their correspondents were there deploring how these poor people were fearful of racism, misogyny, homophobia, islamophobia, the hatred, the fascism that was now lurking in America because of the election of Donald J. Trump. In other words, MsleftBC and Crap News Network were  unwitting participants in colluding with Russia and Vladimir Putin,  to sow discord and distrust against the American political system. They were doing Putin’s bidding.  MSNBC and CNN basically worked for the Russians by covering that rally for 5 hours straight, thus giving it legitimacy, as they were unwitting enablers and participants in colluding with Putin. What’s very telling about the so-called journalists at CNN&comp is that they never bothered to investigate who’s behind the anti Trump rally. Now we know they were played by the Russians, as the entire point of the Russian disinformation campaign was to sow discord in the American society. And who was giving the Russians maximum bang for their 2 million dollar buck? The mainstream media. And they are still doing it. Putin’s dirty work, that is.

23 thoughts on “Narrative Collapse: How CNN and MSNBC Colluded with Russia”