From Bloomberg:
The battered American retail industry took a few more lumps this week, with stores at both ends of the price spectrum preparing to close their doors.
At the bottom, the seemingly ubiquitous Payless Inc. shoe chain filed for bankruptcy and announced plans to shutter hundreds of locations. Ralph Lauren Corp., meanwhile, said it will close its flagship Fifth Avenue Polo store — a symbol of old-fashioned luxury that no longer resonates with today’s shoppers.
And the teen-apparel retailer Rue21 Inc. could be the next casualty. The chain, which has about 1,000 stores, is preparing to file for bankruptcy as soon as this month, according to people familiar with the situation. Just a few years ago, it was sold to private equity firm Apax Partners for about a billion dollars.
“It’s an industry that’s still in search for answers,” said Noel Hebert, an analyst at Bloomberg Intelligence. “I don’t know how many malls can reinvent themselves.” 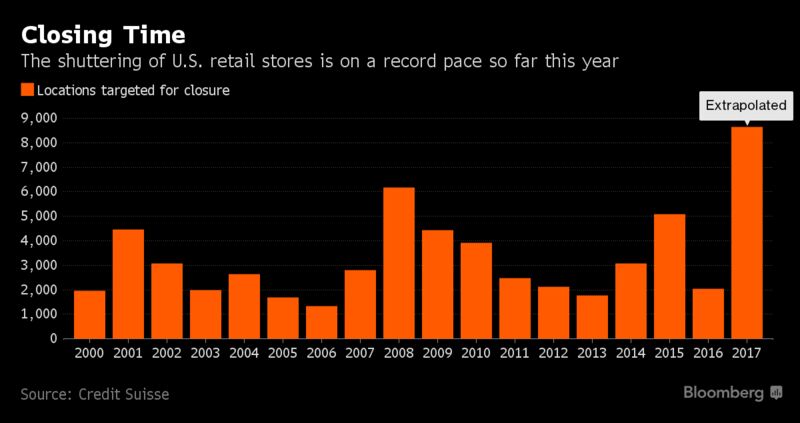 The rapid descent of so many retailers has left shopping malls with hundreds of slots to fill, and the pain could be just beginning. More than 10 percent of U.S. retail space, or nearly 1 billion square feet, may need to be closed, converted to other uses or renegotiated for lower rent in coming years, according to data provided to Bloomberg by CoStar Group.
The blight also is taking a toll on jobs. According to Labor Department figures released on Friday, retailers cut around 30,000 positions in March. That was about the same total as in February and marked the worst two-month showing since 2009.
Urban Outfitters Chief Executive Officer Richard Hayne didn’t mince words when he sized up the situation last month. Malls added way too many stores in recent years — and way too many of them sell the same thing: apparel.
“This created a bubble, and like housing, that bubble has now burst,” he said. “We are seeing the results: Doors shuttering and rents retreating. This trend will continue for the foreseeable future and may even accelerate.”
Year-to-date store closings are already outpacing those of 2008, when the last U.S. recession was raging, according to Credit Suisse Group AG analyst Christian Buss. About 2,880 have been announced so far this year, compared with 1,153 for this period of 2016, he said in a report.

Extrapolating out to the full year, there could be 8,640 store closings in 2017, Buss said. That would be higher than the 2008 peak of about 6,200.
Retail defaults are contributing to the trend. Payless is closing 400 stores as part of a bankruptcy plan announced on Tuesday. The mammoth chain had roughly 4,000 locations and 22,000 employees — more than it needs to handle sluggish demand.
HHGregg Inc., Gordmans Stores Inc. and Gander Mountain Co. all entered bankruptcy this year. RadioShack, meanwhile, filed for Chapter 11 for the second time in two years.
Other companies are plowing ahead with store closures outside of bankruptcy court. Sears Holdings Corp., Macy’s Inc. and J.C. Penney Co. are shutting hundreds of locations combined, reeling from an especially punishing slump in the department-store industry.

Others are trying to re-emerge as e-commerce brands. Kenneth Cole Productions said in November that it would close almost all of its locations. Bebe Stores Inc., a women’s apparel chain, is planning to take a similar step, people familiar with the situation said last month.
“Today, convenience is sitting at home in your underwear on your phone or iPad,” Buss said. “The types of trips you’ll take to the mall and the number of trips you’ll take are going to be different.”
But even brands moving aggressively online have struggled to match the growth of market leader Amazon.com Inc.
The Seattle-based company accounted for 53 percent of e-commerce sales growth last year, with the rest of the industry sharing the remaining 47 percent, according to EMarketer Inc.
While high-end malls continue to perform well, the exodus away from brick-and-mortar stores is taking a toll on so-called C- and D-class shopping centers, according to Oliver Chen, an analyst at Cowen & Co. There are roughly 1,200 malls in the U.S., and those classes represent about 30 percent of the total, he said.
The glut of stores is far worse in the U.S. than in other countries.
“Retail square feet per capita in the United States is more than six times that of Europe or Japan,” Urban Outfitters’ Hayne said last month. “And this doesn’t count digital commerce.”
Still, the Class A malls continue to thrive, Chen said. And most Americans continue to do shopping in person: Customers prefer physical stores 75 percent of the time, according to Cowen research.
The key is creating the right experience, whether it’s online or off.
Retailers should “refocus on customers,” Chen said. “Management needs to be fixated on speed of delivery, speed of supply chain, and be able to test read and react to new and emerging trends.”