For an organization that values public relations, skipping Colin Kaepernick’s workout seems like a strange decision for the Cowboys

The Cowboys like to say player acquisition is a job that takes place 365 days a year.

Amend that to 364 days since the club skipped Colin Kaepernick’s workout outside Atlanta on Saturday.

Roughly two-thirds of NFL teams arrived to take part in the league-staged spectacle. That number dropped to eight teams once this poorly organized, contentious arrangement deteriorated into a personal workout that Kaepernick conducted on his own when the league and the player’s representatives couldn’t agree to details.

The Cowboys were never participants.

“We like our young guys,’’ coach Jason Garrett said the day before this ill-conceived tryout unfolded. “We’re trying to develop those guys. We feel like they made progress.”

The Cowboys have no interest in signing Kaepernick to put on the depth chart behind Dak Prescott and are under no obligation to do so. If you want to attach that to the larger issue of why a quarterback who took his team to the Super Bowl can’t find a job in the league, go ahead.

But from a public relations standpoint, something this organization values, it seems strange. Why not go? There were internal discussions earlier in the week and indications were the club was prepared to send a representative.

The Cowboys have determined their brand doesn’t align with what Kaepernick has come to represent. This isn’t about upgrading the roster.

—The Dallas Morning News, Friday. And from the Arizona Republic, also on Friday: 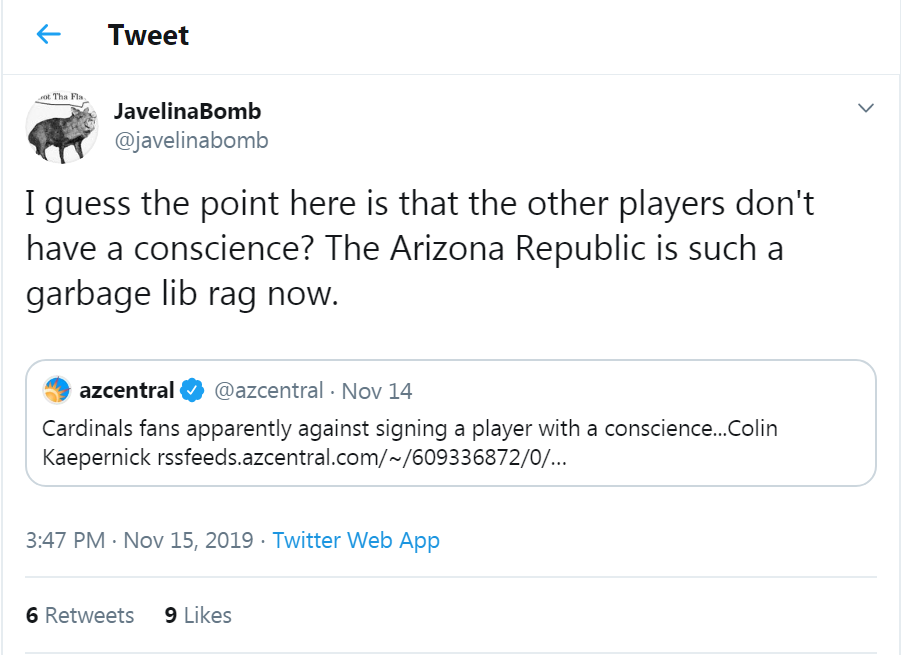 No other industry trashes its customers like the DNC-MSM.