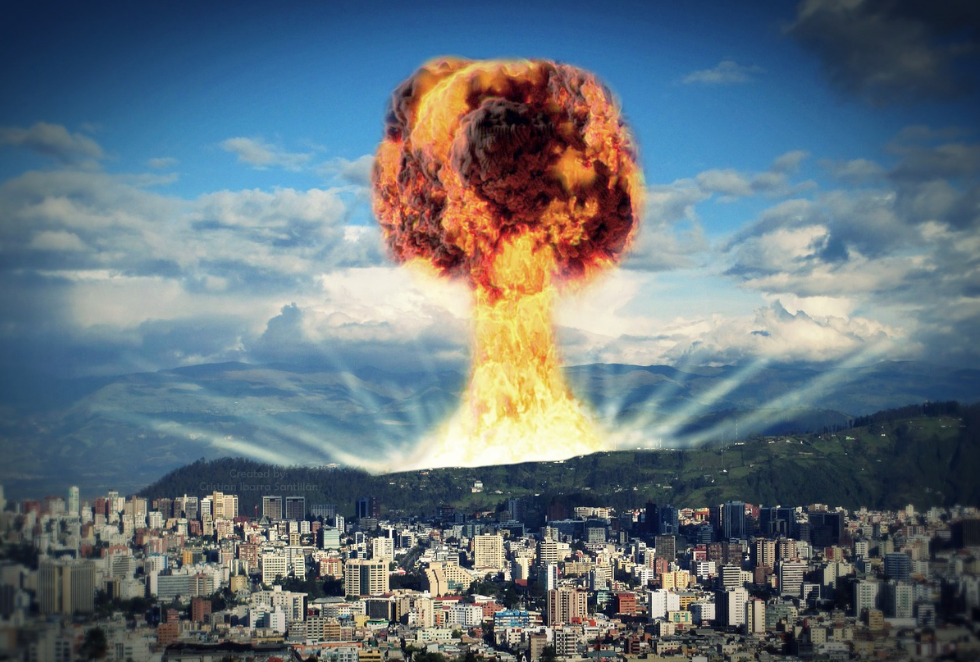 59 years after the Cuban missile crisis, a new source of tension threatens to bring the United States and Russia to the brink of war.  But instead of John F. Kennedy, we have Joe Biden and his hapless minions in the White House.  I wouldn’t trust Biden and his national security team to navigate us through a pancake crisis at the local Waffle House, and so I am definitely not optimistic that they will be able to handle the crisis in Ukraine.  Unfortunately, at this point there isn’t much wisdom in the halls of Congress either.  For example, on Tuesday U.S. Senator Roger Wicker went on television and told Fox News viewers that a nuclear first strike against the Russians should be an “option” that the Biden administration should keep open…

Sen. Roger Wicker (R-MS) told Neil Cavuto on Tuesday that the United States should keep all options available when dealing with potential Russian aggression against Ukraine. That even includes a first-use nuclear strike against.

That will definitely calm nerves in Moscow.

I can’t believe that any member of Congress would be so reckless.  Relations with Russia are now the most tense that they have been since the height of the Cuban missile crisis, and Wicker is talking about sending our military vessels into the Black Sea and raining “destruction on Russian military capability”…

Because any rational U.S. Senator would not speak like that.

He added that as a matter of policy, in the U.S. “we don’t rule out first-use nuclear action. We don’t think it will happen. But there’s certain things in negotiations – if you’re going to be tough – that you don’t take off the table. And so I think the president should say that everything is on the table.”

This is the kind of talk that can start a war.

And when the time comes, I guarantee you that Russia will not hesitate to pull the trigger on a first strike if they believe that we are about to launch one.

So we should be doing all that we can to bring emotions down.

When the video call began, Putin was ready to roll, but Biden forgot to turn his microphone on…

“I welcome you, Mr. President!” Putin said at the start of the call, according to a brief video of the opening moments.

Biden experienced some technical difficulties on the call, apparently forgetting to switch his microphone on.

During the call, Putin specifically asked for two things…

And, in its readout of the two leaders’ call, the Kremlin said that Putin asked Biden for guarantees that NATO would neither expand in an Eastern direction nor deploy ‘offensive strike weapons systems in the states adjacent to Russia.’

Putin keeps making these points over and over again.

Also, Putin is absolutely determined to keep Ukraine out of NATO.

If Biden and other western leaders would agree to those two things, the crisis would be over.

Unfortunately, Biden has no intention of ever giving Putin anything that he wants.  Biden wants to show U.S. voters that he can be “tough” with the guy that Democrats have been demonizing for years, and so there will be no compromises.

When he was asked about Putin’s red lines, Biden responded by saying “I don’t accept anybody’s red lines”.

But Putin isn’t bluffing, and concern that his red lines will be crossed has motivated him to send large numbers of Russian troops to the border with Ukraine.

In turn, this has raised fears in the western world that a potential invasion of Ukraine could be imminent.  During his call with Putin, Biden warned that any attack would result in more military resources being sent into Ukraine…

In a high-stakes video teleconference, Biden emphasized that he preferred a diplomatic solution to the crisis in Ukraine. But he warned that the U.S. would send additional defense resources to Ukraine above what it is already providing and would be looking to deploy additional forces to fortify its NATO allies in the area in response to a Russian incursion in Ukraine.

In addition, the Biden administration is threatening that the Nord Stream 2 pipeline could be shut off…

Sullivan would not confirm reports that the U.S. has an agreement with Germany’s incoming government to cut off the Nord Stream 2 pipeline, a much-disputed underseas gas pipeline planned to run from Russia to Germany, if Russia escalates its conflict with Ukraine.

But, “if Vladimir Putin wants to see gas flow through that pipeline, he may not want to take the risk of invading Ukraine,” he said.

Both sides keep raising the stakes.

So what happens if one side decides to push all of their chips into the middle of the table?

Following the call with Biden, the Kremlin placed the blame for the escalating crisis squarely on Biden and NATO…

The Kremlin, in its summary of the call, described the conversation between Biden and Putin as “candid and businesslike.”

“Putin emphasized that it’s wrong to put the responsibility on Russia, since it is NATO that has been making dangerous attempts to expand its presence on the Ukrainian territory and has been expanding its military potential near Russian borders,” the Kremlin said.

Because one false move could send us tumbling into World War III.

At this moment, it is being reported that the Russians have approximately 175,000 troops massed on the Ukrainian border…

US intelligence forces detected that Russia is massing around 175,000 troops on the border in preparation for a “massive offensive” as soon as early next year.

Unlike many in the mainstream media, I do not believe that a Russian invasion is imminent.

But if Biden and other western leaders decide to try to show how tough they are by crossing one of Putin’s red lines, that could change things really quickly.

Ever since the 2016 presidential election, politicians in Washington have been relentlessly demonizing Russia, and now our relations with the Russians are at an all-time low.

At some point there will be war, but let us hope that it can be put off for as long as possible.

Unfortunately, Biden is surrounded by the worst national security team that any U.S. president has ever had, and every time they try to “solve” a problem they always seem to make it even worse.