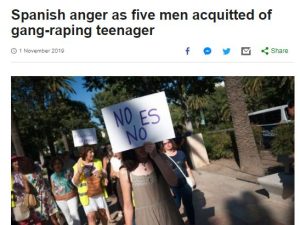 The legal scandal in Spain after a court acquitted five men of raping (sexual assault) a 14-year old girl because she was unconscious has sparked international outrage and local protests. It is not that the men were freed. Since the girl was unconscious, technically she was not raped since she did not resist. Because she was in an “unconscious state,” the accused would not have had to use force to “rape” the girl even though she was a minor. According to Spanish law, one could only charge sexual assault (rape) if the victim is physically or psychologically forced to perform the sexual act. She did not resist because she had passed out because of alcohol and drugs.

The protesters were carrying signs “No Es No,” which translates to “No means no.” This is where the rule of law comes into play. What they did was obviously wrong on many levels. What if someone was drunk while driving and killed a pedestrian? Is that then murder with intent to kill? Law can be a fine line. Here the court acquitted the men of “rape” (sexual assault) and reduced the charge to sexual abuse. They were still sentenced to between 10 and 12 years in prison. A conviction for sexual assault would have carried a prison sentence between 15 and 20 years.

READ  Why Mitch McConnell Backed Away From Trying To Convict Trump

This is the problem with writing laws. There is always something that it does not quite fit. If you limited murder to people living together, qualifying that they must be a spouse, then are you innocent of murder because you were not married? In this case, there is no presumption that a minor cannot consent as there is in the United States. If the girl was 14 and agreed to have sex with all five, it would still be charged as if she did not give consent. Yet, it would not be regarded as a violent rape, but a statutory rape implying the minor cannot give consent legally being under age, which has been the case often with teachers. This has even resulted in varied prosecutions where the question then arises whether two minors can even have consensual sex if legally they are presumed not to be able to consent? A 15-year-old girl was raped by two 13-year-old boys. They were given 6 months probation because of this problem of consent being impossible for minors.

READ  Why Mitch McConnell Backed Away From Trying To Convict Trump

The rule of law is often not perfect. There are exceptions under the strict reading of the law, which can result in legal persecution or injustice in some cases.