Crude oil prices continued to rise on Tuesday, making the most recent rally the longest in 17 months. 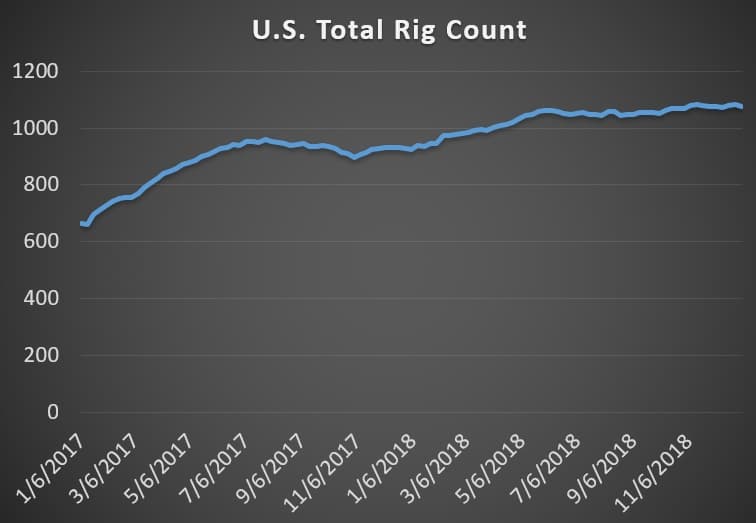 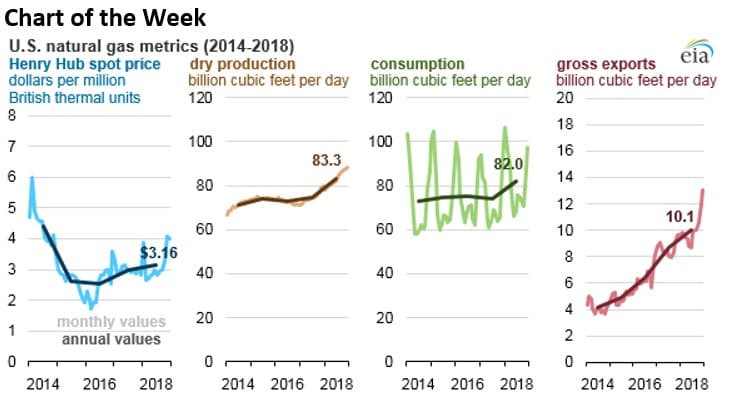 – The Henry Hub natural gas price jumped by 15 cents in 2018 to an average of $3.16/MMBtu. Spot prices spiked in October and November on cold weather and tighter supply conditions.

– Still, natural gas production soared over the course of the year, with new pipelines coming online in the Marcellus unlocking more output. Also, associated gas production in the Permian surged.

– However, consumption also rose, as did exports. That led to a tighter market in the fourth quarter. Upstream production is expected to continue to ratchet higher, relieving some of that market pressure.

• Brazil’s justice ministry recommended that Petrobras (NYSE: PBR) sell off four refineries as part of the company’s $26.9 billion divestment plan, while also ending its monopoly in the downstream sector. The new president is expected to be considering liberalizing parts of the energy sector.

• ExxonMobil (NYSE: XOM) said it began drilling the first of two planned wells in Guyana this month. The company has also moved into the peak execution phase of its Liza Phase 1 development, which should come online in 2020.

Oil prices continue to post gains, extending a rally that is the longest in 17 months. The latest optimism centers on the ratcheting down of tensions between the U.S. and China, as well as a softer tone from the U.S. Federal Reserve. In the oil market, the OPEC+ cuts are phasing in, while Saudi Arabia has pledged to cut even deeper. “Saudi Arabia will continue to be the decisive factor for the markets this year, just as they were last year,” Eugen Weinberg, head of commodities research at Commerzbank AG in Frankfurt, told Bloomberg. “They can be very convincing when they choose to be. And so we see the potential for Brent crude to go to $70 a barrel over the course of the year.”Related: WoodMac: Demand For Oil In Transportation Sector To Peak In A Decade

READ  What Inflation? US Residential Rents Expected To Rise By 9.5% Over Next 12 Months (Cleveland Has Fastest Rent Growth??)

Saudi plans cuts to boost prices. Saudi Arabia will reportedly cut oil exports by 800,000 bpd below November levels, going beyond what it had promised as part of the OPEC+ agreement. The Wall Street Journal reports that the Saudis are cutting deeper in hopes of engineering a price rise to $80 per barrel. Oil prices rose sharply on the news on Monday, but the market still seems too soft for a return to $80 per barrel anytime soon. Riyadh is under fiscal pressure as the Saudi budget does not breakeven unless oil prices are in the mid-$80s.

North Sea sees rebound, but exploration still at low. The UK’s North Sea saw 13 final investment decisions in 2018, more than the previous three years combined. Leaner and more efficient projects have helped the mature oil basin stage somewhat of a rebound. However, exploration is still at a record low, according to the FT. That raises questions about the viability of the region in the long run. Meanwhile, BP (NYSE: BP) is considering selling its stake in the Shearwater assets in the North Sea, which would free up the company to focus on its increasing presence in U.S. shale. A sale could be worth several hundred million dollars, according to Bloomberg.

Hi-Crush saw sales plunge. Hi-Crush Partners (NYSE: HCLP) saw its share price fall by 15 percent on Monday after reporting that fourth-quarter sales came in much lower than expected. The company also suspended its dividend. The poor results are a harbinger of a broader U.S. shale drilling slowdown. Hi-Crush said completion activity dropped, reducing demand for its frac sand. Hi-Crush hopes for a rebound this year. The company said it anticipates “improving activity in 2019 as E&Ps focus a larger share of their capital budgets on completions and additional takeaway capacity in the Permian Basin becomes available, but the pace of improvement remains uncertain.”

Alberta looks at refineries. With the attempt to build major pipelines to move oil out of the province frustrated, Alberta is now looking to build new refineries to process oil at home. The provincial government is gauging interest from the industry and has not said how or if the government would engage with any hypothetical projects. The major drawback is that the region would still have the same midstream problem because it would need to ship out refined fuels. Meanwhile, the discount for Western Canada Select (WCS) has sharply narrowed since Alberta instituted mandatory production cuts. WCS traded just $10.50 per barrel below WTI on Monday – at its worst, WCS traded at a discount in excess of $45 per barrel in late 2018.

U.S. crude oil starting to return to China. An estimated three cargoes of U.S. crude oil are slated to arrive in China next month, another sign of a thaw in the trade war, according to Reuters. That would be up from zero cargoes in January.

U.S. government shutdown affecting oil and gas. The ongoing U.S. government shutdown has halted work on a variety of issues, including the review of Dominion Energy’s (NYSE: D)Atlantic Coast natural gas pipeline, TransCanada’s (NYSE: TRP) Keystone XL pipeline, and reviews on seismic surveying in the Atlantic Ocean. However, the Trump administration is still working on Gulf of Mexico auctions and the development in the Arctic National Wildlife Refuge. Critics say the administration is engaging in favoritism that could be illegal.

Nord Stream 2 faces slipping support. The debate in Germany has started to turn against the Nord Stream 2 pipeline, which would carry Russian gas to Germany via the Baltic Sea, according to Bloomberg.