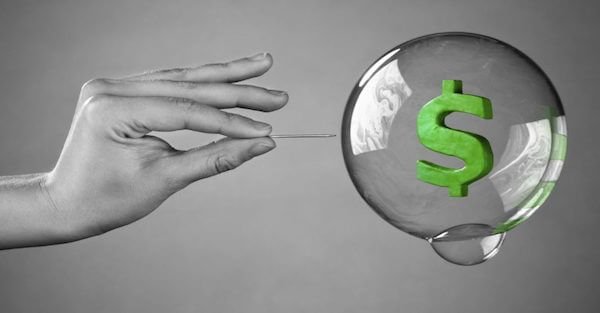 And Buffett’s still sitting on over $100 billion of cash. That means he’s got enough money to buy almost any company he wants, anywhere in the world.

But the only move Buffett made in the last quarter was buying $928 million of Berkshire Hathaway stock.

To be fair, nobody knows Berkshire better than Buffett. And shares may present a good value at this level – an all-time high price.

But it’s clear to me that Buffett simply can’t find anything else worth buying.

Remember, Buffett’s got over $100 billion in cash (and he could use debt to fund an even larger acquisition).

So he could buy stock in any publicly traded company. Or he could buy most any private company (the last time he did this was Precision Castparts in 2016 for $32 billion).

He’s got so much cash he could even buy any one of the 451 out of 500 largest companies in the US – Nike, Starbucks, Goldman Sachs, etc.

But, nope… He just bought back some Berkshire stock.

In addition, he’s selling longtime holdings like drywall maker USG and IBM (for a $1 billion loss).

I wrote about Buffett and his giant cash pile in February, just after Berkshire released its annual report.

Back then, Buffett had a whopping $116 billion. But still couldn’t find anything to buy. As he said:

In our search for new stand-alone businesses, the key qualities we seek are durable competitive strengths; able and high-grade management; good returns on the net tangible assets required to operate the business; opportunities for internal growth at attractive returns; and, finally, a sensible purchase price.

That last requirement proved a barrier to virtually all deals we reviewed in 2017, as prices for decent, but far from spectacular, businesses hit an all-time high.

As we wrote back then, it seems people are still willing to pay far too high a price for not that great of businesses.

Like Buffett, I’ve also been raising cash. In fact, I’m sitting on more cash today than at any other time in my life.

And, like Buffett, I’m mostly holding that cash in 28-day T-bills.

However, unlike Buffett, I don’t have $100 billion to spend.

If I make a 20-50% return on a $5 million investment, that’s meaningful to me. But that’s peanuts to a guy like Buffett.

He’s got to put billions of dollars to work to generate enough cash to make a difference. And that severely limits the areas he can hunt for value.

But I’m able to look at all kinds of opportunities – like loans backed by fine wine, loans backed by bullion or European real estate and various, small-cap stocks around the world.

Despite most markets trading at or near all-time highs, there’s still a ton of value if you’re willing to do some extra work and look outside the US.

In The 4th Pillar, Tim Staermose just identified a consumer products company in South Korea trading for a 12% discount to its net cash backing.

He’s also recommended a security that holds portfolio of blue-chip stocks (including companies like Starbucks) trading for over a 20% discount to their market value.

And those are just two of the many opportunities you can take advantage of today in his 4th Pillar portfolio.

Value investing has been left for dead as the dumb money has chased up the value of companies like Uber and Tesla.

But when you can buy a profitable company for less than the amount of cash it has in the bank, it’s pretty hard to go wrong.

I’ll bet Buffett would make those investments if he could.