Earnings growth is expected to turn negative for the first quarter, and an already low growth forecast for the rest of the year could be cut in half, as companies continue to report fourth quarter profits.

Fourth quarter earnings growth has been strong, at about 16 percent, but companies are guiding lower when it comes to 2019. The first quarter is now expected to see a decline of 0.25 percent in profits., according to S&P Capital IQ.

READ  Is It Game Over For Growth Stocks?

Sam Stovall, chief investment strategist at CFRA, said if history is a guide, the revisions for 2019 earnings should continue through the end of the first quarter. That could cut S&P Capital IQ’s 2019 earnings growth forecast to just a 1.5 percent gain. FactSet, which also compiles analysts’ estimates, has been forecasting a 0.8 percent decline for the first quarter.

Full-year estimates are well below what they were in September, he notes. “We were expecting them to be up 10 percent, and now it’s more like 3.5 percent and falling, but the market is higher,” Stovall said.

The reasons for the disconnect between profit expectations and the market could be explained by the Fed, which is on hold from cutting rates and could potentially hike them, and a view held by some investors that the trade war will not last all year, he said.

Stocks fell sharply Thursday after a White House official said the U.S. and China trade negotiators are not close and that there are currently no planned meetings between President Donald Trump and China’s President Xi Jinping before the March 1 deadline.

So far, the fourth quarter earnings season hasn’t been a major problem for stocks, despite the daily decline in the outlooks. “The reasons investors might be ignoring the reduction in earnings estimates is it’s related to China, and that could turnaround if some sort of trade agreement is announced,” said Stovall.

All 11 of the S&P major sectors have seen downward revisions to earnings estimates.

“We’re also looking for earnings to go negative for energy, materials, real estate and utilities in 2019, and of those just real estate was supposed to show a year-on-year decline,” Stovall said. 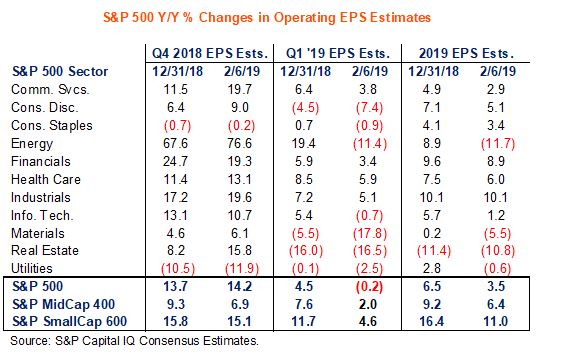