Earnings season has yet to officially begin when the big banks report next week and it already looks like Wall Street is in for a rude awakening when it comes to corporate profits in both the last quarter of 2018 and the rest of 2019 just one quarter after the best earnings season in history.

The recent warnings, guidance cuts and layoff announcements to date have been nothing short of dismal. Here is a quick summary of what we have observed in just the last week:

Virtually every single sector is telegraphing weakness, from transports to techs to autos to retail and finance. Here are some additional details courtesy of Bloomberg:

The outlook for the U.S. airline sector darkened notably as economic uncertainty threatens demand. American Airlines cut its estimate for a key gauge of pricing power on Thursday after a similar move by Delta at the beginning of the year. And that was before accounting for a partial government shutdown in the country.

Carriers also see a far bleaker 2019: FedEx cut its outlook a few weeks ago – just three months after raising it – reflecting an abrupt change in its view of the global economy. CEO Fred Smith cited trade tensions, especially between the U.S. and China, among its troubles, saying most of the problems he faced were due to “bad political choices.”

The first drop in Chinese passenger auto sales is reverberating across the globe as the gloom in the auto industry spreads, and within hours on Thursday, Jaguar and Ford Motor Co.announced major cost-cutting programs. Ford took the most aggressive action in Europe, warning it could close plants and fire thousands. It was followed by Jaguar, Britain’s biggest carmaker, which disclosed a plan for 4,500 layoffs, about 10% of its global workforce. The culprits, according to Jaguar: Brexit, flagging demand for diesel-powered vehicles and a downturn in China.

Before today’s retail crash, luxury retailers were already moaning about the Chinese economic slowdown, and none more so than brands like Tiffany and Louis Vuitton owner LVMH. Tiffany said last week that its weaker-than-expected sales highlighted a “clear pattern” of Chinese shoppers cutting back on spending when they’re overseas. Then on Thursday, Macy’s and Kohl’s gave the clearest indication so far that the U.S. holiday season might not have been the “record” smash hit many said it was just two weeks ago when “strong retail spending” was cited as the catalyst for the year-end rally. Macy’s darker outlook and Kohl’s disappointing sales compounded concerns that rising interest rates and Chinese trade turmoil could dent consumer spending, a backbone of the U.S. economy.

With banks on deck to report next week, we already know that asset managers have not been spared as volatility roils markets and investors have piled into funds with low fees. BlackRock was the latest company to announce a reduction in its workforce on Thursday, with a plan to dismiss 500 employees, or 3% globally, in the weeks ahead. That, according to Bloomberg, was  BlackRock’s largest headcount reduction since 2016. Quant hedge fund AQR Capital announced job cuts two days ago after a year of poor performance. State Street is also trimming its workforce with the bank cutting 15% of its senior management, as it new chief executive continues with a plan to whittle management ranks.

See also  So it begins: Businesses will start checking to see if you're vaccinated or not. California rolling out digital vaxx passport system

Erratic markets have started to have an impact on financial plans at big corporations. Industrial giant United Technologies said Thursday it has halted the sale of its fire-safety and security business because of recent volatility. The company will focus instead on its broader plan to separate such disparate businesses as jet engines, elevators and climate controls.

The biggest shock to the upcoming earnings season was Apple’s sales forecast cut on Jan. 3, the first time in almost two decades that the company lowered its outlook. Apple blamed the economic slowdown in emerging markets, particularly in China for a major cut in its projected revenue even though it gave its latest forecast just three months ago. Of course, there were many warning signs, as several key Apple suppliers trimmed their own estimates in the previous months. While the Apple news rippled through the industry, the recent rally driven by a dovish Powell has helped Apple erase many of its recent losses.

While the rising gloom has already had an impact on analyst expectations, with consensus estimates showing an expectation that S&P profits will rise 7.7%, down from a forecast for a 20% plus increase for all of 2018, the real number may end up being much lower. 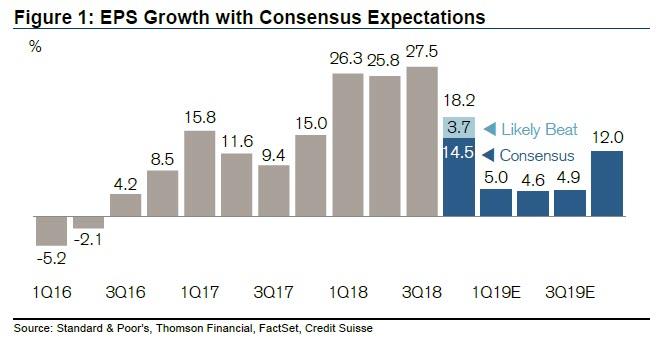