Despite Newton’s tremendous intelligence and experience, he fell victim to the bubble along with the vast herd of credulous greedy punters.

One of the most famous examples of smart people being sucked into a bubble and losing a packet as a result is Isaac Newton’s forays in and out of the 1720 South Seas Bubble that is estimated to have sucked in between 80% and 90% of the entire pool of investors in England.

Some have claimed that Newton did not buy early in 1711, sell in April 1720 for a nice profit, then sink the majority of his substantial fortune in the bubble as it peaked in summer, and then suffering heavy losses as the bubble popped in September, but evidence supports this chain of events: Isaac Newton and the perils of the financial South Sea (Physics Today).

The chart below indicates the dates of Newton’s purchases in his own account and the Hall estate of which he was a trustee.

I have added a “we are here” indicating where we are in the current bubble expansion and collapse: this secondary peak after a bout of initial selling is the classic “last chance to exit.” Note that Newton “bought the dip” on the way up and then added to his position as the mania rolled over, making his final fatal purchase as a “buy the dip” just before the “last chance to exit” spike–which is precisely the point the current bubble has finally reached, when everyone is all in and “buying the dip” to increase the profits which everyone agrees are essentially guaranteed because the Fed.

The problem is, alas, smart people are still humans, and humans run with the herd when the herd is minting money. Absurdly farfetched claims are gussied up with “mathiness” and narratives that are powerfully simplistic, with just enough common-sense credibility to enliven the excessive greed that lies dormant but ready in every human heart.

Newton was not just smart and wealthy, he was financially sophisticated and a very successful investor who favored financial instruments such as bonds over land. He was the ultimate experienced, savvy investor who would not be bamboozled by specious math. Despite Newton’s tremendous intelligence and experience, he fell victim to the bubble along with the vast herd of credulous greedy punters.

Newton died a wealthy man in 1727, so his bubble misadventure did not ruin him, though it did lop a huge chunk off his net worth. Many in the herd, then and now, won’t be as fortunate. 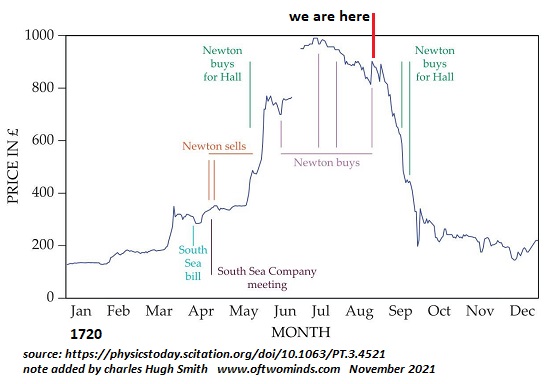