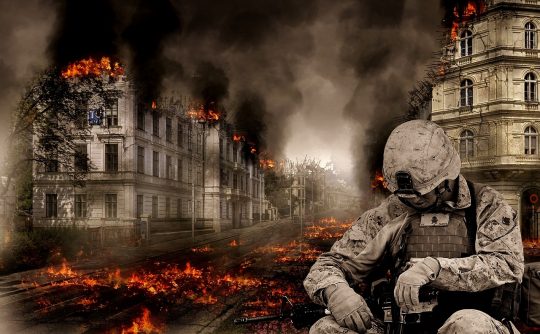 Why aren’t more Americans concerned that we could be on the verge of an apocalyptic war with Iran?  If there was still any doubt, what happened on Friday made it exceedingly clear that we are literally on the brink of seeing World War 3 erupt in the Middle East.  And as I detailed yesterday, a war with Iran wouldn’t be anything like our wars in Iraq and Afghanistan.  If the American people truly understood what a war with Iran would be like, there would be millions of protesters in front of the White House right now trying to stop it from happening.  Without a doubt, the Iranian government is deeply evil, but the Iranians also possess weapons of mass destruction and they control a vast global terror networkunlike anything the world has ever seen before.  A full-blown war with Iran would be the stuff that nightmares are made out of, and it would unleash death and destruction on an unimaginable scale all over the planet.  Perhaps it is already too late to stop what is going to happen, but I very much hope that is not true.

After news broke on Friday that Iran had seized two British oil tankers, President Trump told the press that “Iran is in big trouble”…

President Donald Trump said Friday that the Islamic Republicn of Iran has endangered itself by seizing a pair of British oil tankers in the Persian Gulf.

‘Iran is showing their true colors,’ he told reporters on the South Lawn of the White House has he departed for a weekend in New Jersey.

‘Iran is in big trouble.’

That doesn’t mean that airstrikes are imminent, but it does mean that we are a lot closer to military conflict than we were before.

Personally, I have no idea what Iran is thinking.  When the Iranians seized a British oil tanker named “Stena Impero” on Friday, it made headlines all over the world…

The U.K.-flagged Stena Impero, which has a crew of 23 aboard, “was approached by unidentified small crafts and a helicopter during transit of the Strait of Hormuz while the vessel was in international waters,” Stena Bulk, the shipping company that owns the vessel, said in a statement. “We are presently unable to contact the vessel which is now heading north towards Iran.”

Iran’s Revolutionary Guard forces, in a statement on their website, say the ship was seized for “non-compliance with international maritime laws and regulations” and is being brought to an unnamed Iranian port, according to the Associated Press. Websites tracking the ship’s path showed it turning sharply in the direction of Iran’s Qeshm Island, instead of its intended destination of Saudi Arabia.

Of course it is also possible that the Iranians are being set up.  According to Iranian media, the Stena Impero “had turned off its GPS locator” and had “tried to enter the Strait of Hormuz in an area where most ships exit”.

If those claims are true, then that certainly puts a much different spin on the story.

Almost an hour later, the Iranians briefly seized a second oil tanker, but after issuing a warning the Iranians let it go…

Approximately an hour later, a Liberian-flagged tanker operated by a British company was also seized by Iran’s Islamic Revolutionary Guard Corps (IRGC) and was seen on maritime tracking services making a turn toward Iran. Iran’s semi-official Fars news agency later claimed that the second ship, known as the Mesdar, was warned to comply with environmental regulations before being allowed to continue on its way.

Needless to say, the British government is deeply concerned about these developments, and Iranian officials are being warned of “serious consequences” if the Stena Impero is not immediately released…

UK Foreign Secretary Jeremy Hunt has warned Iran of “serious consequences” if its military does not return control of the British-flagged oil tanker Stena Impero, according to Sky News. He said British action will be “robust” but also emphasized “we’re not looking at military options” at this early stage.

Hunt said he’s seeking to urgently speak to Iran’s foreign minister, currently unreachable as he’s on a plane flying back from a UN meeting in New York, and hopes the crisis will be resolved diplomatically.

Of course this is just the latest in a long string of incidents which have steadily brought us closer to war.  I covered the developments which we witnessed on Wednesday and Thursday in this article, and the following is a timeline of events which the Daily Mail put together…

May 12: Four commercial oil tankers attacked off the coast of the United Arab Emirates. Washington accuses Tehran, which denies all involvement.

June 13: A Japanese and Norwegian fuel tanker are hit by mysterious blasts while passing through the Strait of Hormuz. Again, Iran denies involvement.

June 20: Iran downs a $130m US surveillance drone over the Strait of Hormuz

July 11: Iran tries to interfere with a UK-registered tanker but is warned off by the Royal Navy.

July 18: The USS Boxer shoots down an Iranian drone over the Strait of Hormuz which it claimed was endangering the vessel.

Before I end this article, I want to make a couple of observations about Iran.

Firstly, the Iranians are obviously not afraid of a war with the western powers, because otherwise they would not dare to seize oil tankers.

What is making the Iranians so confident?  Could it be possible that they have weapons that we don’t know about?

Secondly, the Iranians may feel like they have been pushed so far into a corner that they have no choice but to push back.

Let me give you one example of what I am talking about.  Two Iranian cargo ships arrived in Brazil earlier this year, but now they are trapped because the Brazilians won’t sell them enough fuel to get home…

Reuters explained on Friday that the cargo ships Bavand and Termeh arrived in Brazil a few months ago to deliver a shipment of petrochemical fertilizer and pick up loads of corn. The Bavand was loaded up with 50,000 tons of corn and the Termeh is supposed to take on another 66,000 tons.

Carrying food back to Iran is legal under U.S. sanctions and Iran buys a great deal of corn from Brazil, but unfortunately for the Iranian captains, the Petrobras subsidiary that sells maritime fuel in Brazilian ports cited the U.S. sanctions and refused to refuel the ships. The Iranian government might need to send a tanker loaded with fuel all the way to Brazil to get the cargo vessels and their loads of corn.

The U.S. policy of “maximum pressure” on Iran was intended to get them to fold, but instead it might just be making them so frustrated that they will lash out in anger and set off the spark that causes World War 3 to erupt.

And the U.S. military has been preparing for a coming war with Iran for quite some time.  Last month U.S. troops began arriving at Prince Sultan Air Base in Saudi Arabia, and U.S. fighter jets are scheduled to arrive in August…

In June the U.S. military began moving equipment and hundreds of troops back to a military base in Saudi Arabia that the U.S. deserted more than 15 years ago, according to two U.S. officials familiar with the deployment.

Over the coming weeks the deployment to Prince Sultan Air Base, intended to counter the threat from Iran, will grow to include fighter jets and Patriot long-range missile defense systems, the officials said. The Patriots have already arrived at the base and should be operational in mid-July, while the aircraft are expected to arrive in August.

The moment missiles start flying back and forth, the price of oil is going to go into the stratosphere and the global financial system will be thrown into chaos.

And when terror attacks on western soil start happening, people will be desperate for the violence to stop, but by then it will be too late.

It appears that we are about to get a war that we do not need and that we do not want, and this comes at a time when so many other elements of “the perfect storm”are coming together.

Unfortunately, I don’t see a lot of urgency among the American people to try to stop this war from taking place.  I think that a lot of people simply do not believe that it will actually happen, and many others seem to assume that we will beat the living daylights out of the Iranians without much damage on our end.  Of course a large chunk of the population is so addicted to entertainment that they have absolutely no idea what is going on in the rest of the world.

Yes, there are a few voices that are speaking out against a war with Iran, and that is a good thing.

But for the most part we are sleepwalking toward World War 3, and once it begins there will be no turning back.