Global Plunge Protection Teams must be ordering take-out food; every night is a long one now.

The current stocks/bonds game is for all the marbles, by which I mean the status quo now depends on valuations and interest rates remaining near their current levels for the system to function.

If interest rates soar and/or stocks plummet, the game is over: pension funds collapse, tax revenues drop, debt based on high asset valuations defaults, employment craters and the much-lauded “wealth effect” reverses into a “negative wealth effect” (i.e. everyone looking at their IRA or 401K statement feels poorer every month).

Let’s scan a few relevant charts to understand why this game is for all the marbles. Given the systemic fragility of the global economy, a crash in one asset class or a rise in interest rates trigger defaults, sell-offs, etc. that forcibly revalue other assets.

So the Powers That Be can’t afford to let any asset crash, as a crash will bring down the entire system. Why is this so? The resiliency of the system has been eroded by permanent central bank/central state intervention/stimulus. Withdrawing the stimulus means markets have to go cold turkey, and they’ve lost the ability to do so.

In effect, markets have been hijacked to function as signaling mechanisms(everything’s great because your IRA account balance keeps going up) and as floors supporting pensions, insurance companies, IRAs/401Ks, etc.: all these financial promises are only plausible if asset valuations keep rising.

Fly in the ointment #1: equity valuations have lost touch with the real economy, as measured (imperfectly) by GDP:

Fly in the ointment #3: all the stimulus was borrowed, so global debt is rising to unprecedented levels (just extend the upward sloping lines to get current debt totals): 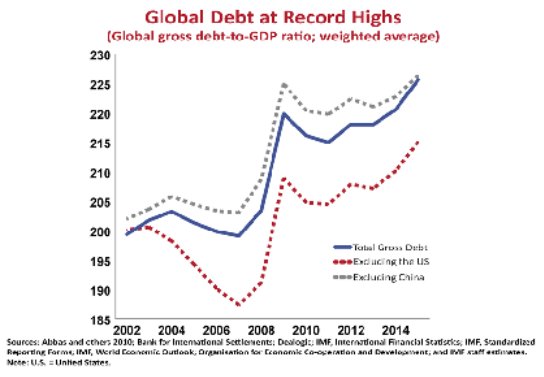 Fly in the ointment #4: wages for the top 5% have risen smartly, and this is the same slice of households that own the vast majority of financial assets; meanwhile, the bottom 95% are seeing declines in real wages or gains so modest that they barely register, and only if official inflation is distorted down to near-zero: 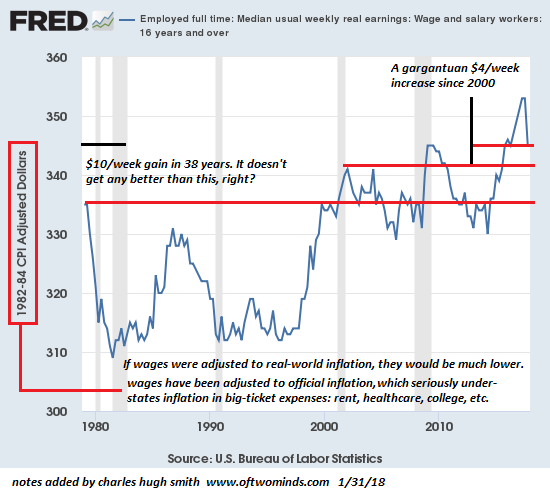 So debt levels are soaring everywhere,, asset valuations are at unsustainable levels, wages are stagnant for the majority of workers, and a revaluation of all financial assets is long overdue–but a revaluation might sweep all the marbles off the board.

Global Plunge Protection Teams must be ordering take-out food; every night is a long one now.