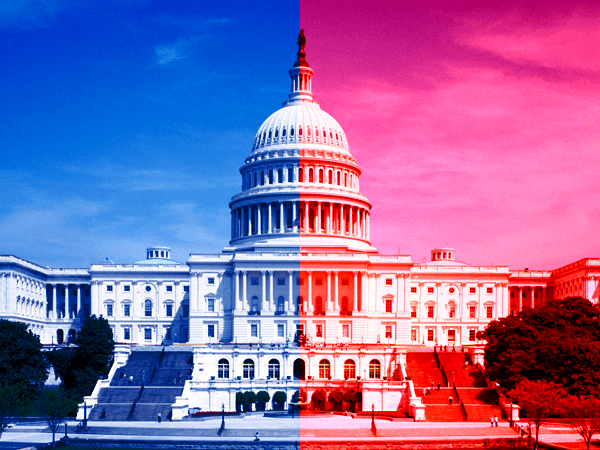 Now that the midterm elections are pretty much over, the Democrats control the House, and the Republicans control the Senate.

This may have several important impacts on your retirement over the next two years (and beyond, depending on policy adjustments). These potential impacts could be crucial because the economic foundation they influence appears to be on shaky ground.

In a peer-reviewed paper from the Indiana Legal Studies department, four authors collaborated and published an alarming discovery (emphasis ours):

The social safety net for older Americans has been shrinking for the past couple decades. The risks associated with aging, reduced income, and increased healthcare costs, have been offloaded onto older individuals. At the same time, older Americans are increasingly likely to file consumer bankruptcy, and their representation among those in bankruptcy has never been higher.

If bankruptcies were to rise sharply across the U.S. because older Americans couldn’t afford even a modest lifestyle, then that isn’t a very solid foundation to build from.

According to Michael Hiltzik at the LA Times, this points to a “retirement crisis in the making,” with an increasing amount of bankruptcies filed by older Americans:

No one knows exactly how this trend will develop, but it does highlight the need for effective Social Security, Medicare, and other retirement policy going forward.

And some interesting developments stemming from 2018’s midterm elections may provide some relief for older generations of Americans who have paid into “the system.” That is, if things don’t get too heated…

How Midterm Changes Could Shape Your Retirement

In a recent Forbes article, economics professor Teresa Ghilarducci outlined some of the key policy-specific retirement ideas that may take shape over the next few years.

While Social Security is an entitlement, it shouldn’t be a primary source of retirement income. But it may do more to prevent poverty in the future if a comprehensive bill passes. According to Ghilarducci:

We should expect more information on Social Security’s ability to prevent poverty while getting more tax revenue without distorting economic growth. We also may hear about bolder Social Security finance options including dedicating a restored estate tax to Social Security and raising the earnings cap beyond the 2019 ceiling of $132,900.

Currently, Social Security taxes are only collected up to $128,400 of income. That cap is set to raise next year, and may go up even further due to changes in the House. This would add more revenue to Social Security’s coffers.

“Adding vision, hearing, and dental” to Medicare plans would be a welcome possibility going forward, according to Ghilarducci.

The current Administration will also be deciding on expansion of Social Security in a variety of ways. Some of the proposed bills could lower prescription drug prices, which would have a positive effect on the limited budgets most older Americans face (much like the VA already does for military veterans).

These additional benefits could come in spite of traditional resistance to expanding these programs.

Other potential impacts include legislative attempts to shore up retirement savings for 63 million Americans with no pensions at work. According to the proposed legislation tax credits, changes in matching contributions, and auto-enrollment benefits can be expected if it passes.

Of course, any of these changes coming to fruition relies heavily on partisan support from both sides of the aisle. These discussions are expected to be heated, so the impact on your retirement may be much different than predicted or expected.

And it’s that uncertainty that requires you to be diligent with your own retirement portfolio — independent of any political “theater” coming over the next few months.

Time to Consider Taking Back Control Over Your Retirement

Leaving your retirement in the hands of politicians who could cut Social Security benefits or increase payroll contributions while you’re employed isn’t a great idea.

If nothing is done Social Security will break down on its own. You can’t rely solely on this entitlement, which is unfair for the millions who have paid into the program for decades.

Consider taking back control of your retirement. One possibility could be shifting a percentage of assets into precious metals like gold and silver. It would provide the stability you need against uncertain political interference.